“My legs feel heavy.”  That was one of my last utterances to Josh as I finished off my pre-race strides before heading to stand behind the start line at the Scotiabank Toronto Waterfront Marathon.  It’s a funny memory to recall now.

We went into this race with precise goals.  Win and run under the Olympic standard of 2:29:30.  Doing both of those was the only way to guarantee a spot on the Canadian Olympic team and I really wanted to cement my place and forgo a spring marathon.  I felt confident in my fitness.  What had begun as a very rocky marathon build had transformed into a pretty great one in the 7 weeks leading into the race.  However, I’ve great builds in the past and have not reaped the rewards so accomplishing these challenging goals set before us still filled me with doubt.  But race morning was not the time to have these thoughts bouncing around in my head — it was time to get down to business.

I felt claustrophobic.  I could see my pacers a ways up ahead.  We still had such a long way to go but I wanted to get to them and tuck in as soon as possible. This was the fast part of the course and I wanted to take advantage of it.  I wriggled my way between runners and got to Jean-Marie Uwajeneza and Adam Hortian, our two designated pacers to help us run the Olympic time standard.  I settled in and got my bearings but I also noticed that the pack I was was aiming to run with was a bit behind and Adam was leading them.  I didn’t think much of it and at 5K they were less than 10s behind.  Josh was at the 5K marker and I tossed him my gloves when I saw him, sensing that I would not want them for the rest of the race.  He said I was ahead but the downhill segments during this part can certainly make it faster and I was happy to just roll with it.

This section was quick but it didn’t feel like that.  It felt easy, I wasn’t pressing, I’m not really sure what happened.  I focussed solely on rhythm.  Just getting into the marathon rhythm, being economical and having an effortless stride.  I was shocked to see 34:09 at the 10K marker but there was not much I could do about that then. We had to keep going.

At this point I was able to tuck in behind another guy that my pacer was running beside. It was ideal for me.  I just ran behind them, sheltered and feeling really good.  My thoughts at this moment of the race were on conserving.  I was continually reminding myself that the race starts at 33K (where the course ends and you begin running back towards the city to the finish line).  That’s where I wanted to turn on the jets.

Calm.  At 15K I remember thinking “You’re half way to the point when you are allowed to start pushing.”  And that felt like an okay thought.  My stride felt easy, I trusted that Jean-Marie had helped me settle into an even pace and my job was to just run as efficiently and comfortably as I could.  And although I clipped his heels numerous times (I was hating myself for that!) I did feel like I was very relaxed and champing at the bit to get going during the latter stages of the race.  From 17-18K I spotted Josh again who reminded me that I was way ahead of our pace plan.  Moments later my mum and dad were within view.  I gave them a wave and then immediately warned myself that I had better have a good performance if I am going to wave to someone whilst running a marathon.  We separated from the half marathoners and began to head into some of the more remote, quiet areas of the course. 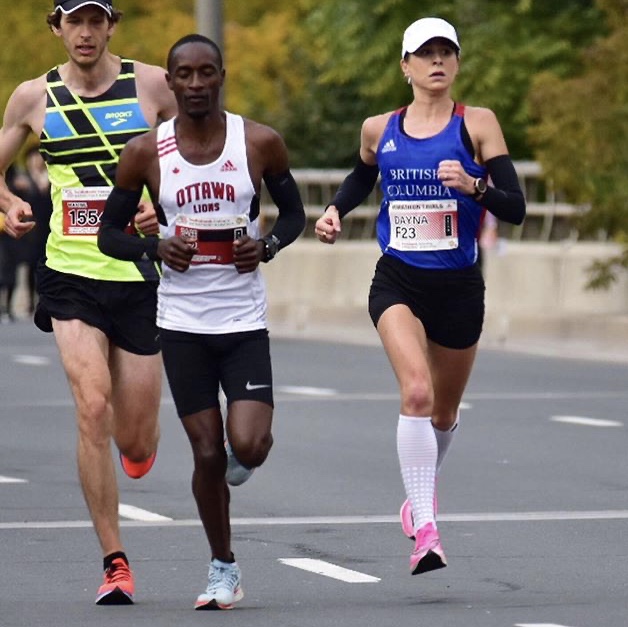 ^ Jean-Marie leading the way as my pacer around the 20K mark. (pc: Kimen Petersen)

As we passed the half marathon mark I heard “1:12:54”.  Over a minute faster than I had planned on going through the halfway point.  By this time, though, I had fully opened the door for something magical to happen.  I wasn’t scared or afraid of failing, I knew it was a special day.  I repeated to myself “This is your moment” multiple times over the course of the race.  This was the day when I was finally going to be able to show all of the hard work we had put in and that was exciting.  I also knew that I would never hear the end of it from Josh if I went out this hard and crashed and burned in the second half.  I had to follow through!  Despite this being a lonelier section of the course it was nice to see what was happening in front of me as the course hair-pinned out and back.

As we headed out to the far reaches of the beaches I felt the wind.  It was probably around 27-28K that things started to feel less easy.  I noticed a headwind and had trouble feeling any reprieve by trying to tuck behind my slight pacer.  I knew it was key to not lose focus during this section.  “Just make it to the turn around!”

This certainly felt like a slower section of the course.  The headwind was noticeable (although it doesn’t take much for me . . .) and it felt like l was either continually running on a false-flat or an obvious uphill.  I worked hard, mentally preparing myself to push in the approaching miles.  We rounded the corner just after 33K and I took note of where my fellow Canadian women were situated.  Emily looked good.  I no longer felt good and had begun to significantly slow.

I knew that now was the time to fight but I also knew that my legs were starting to feel less than great.  A heaviness had taken over and I was worried I was slowing too much.  I kept glancing at my watch to check my instantaneous pace  but then I would forget what I saw and then have to check again.  Jean-Marie continued to encourage me and I knew I was still well within reach of the Olympic standard time.  I was still ahead of pace and just had to make it to the finish line so instead of pressing I played it safe.  I made sure I could cross the line.  I received feedback that Emily was about 1min40 behind and even though she was probably gaining I couldn’t see her and I didn’t think I was dying fast enough to be caught.

Jean-Marie was gone.  He had orders to only pace until a maximum of 40K and he had done an amazing job.  He shouted encouragement as he stepped off the course and now it was my job to bring it home.  At 40K I saw that I was still ahead of my paces that I had scribbled on my hand before the race.  Now it was just one foot in front of the other.  Rounding the final corner I glanced back to be sure I was safe but I could already hear the announcer calling my name.  The finish line was before me and I took note of the time, pumping my fist in celebration before breaking the tape.  Then the realization of what we had just done overcame me and I was in complete shock and awe that everything came together at the perfect moment.  This was my moment. 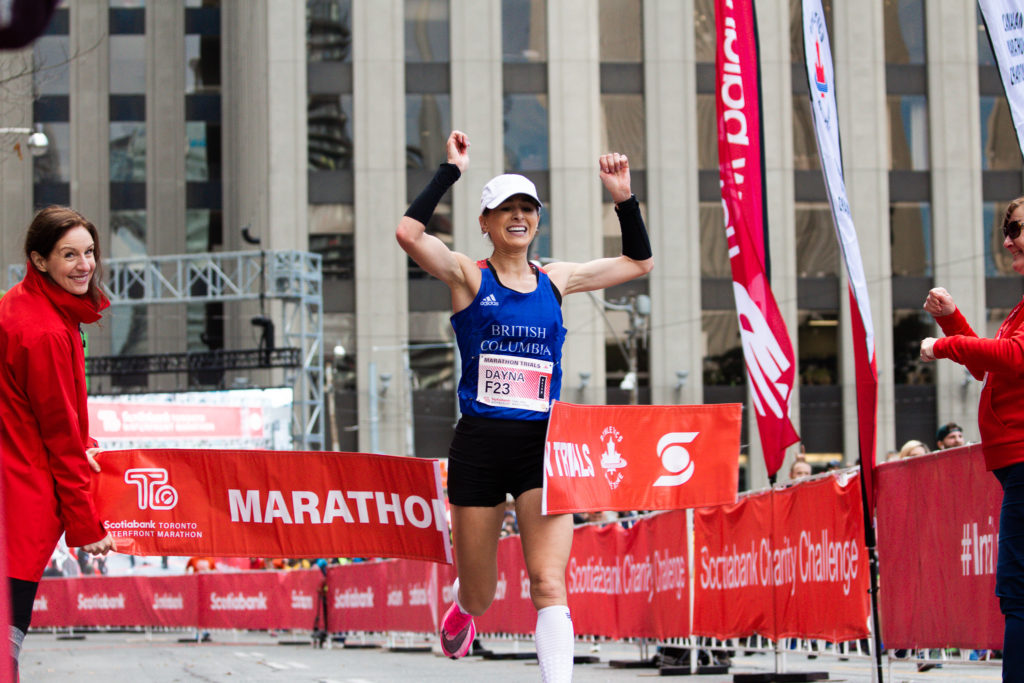 It was a whirlwind in the hours and days post-race.  I felt overwhelmed by all the attention but my heart was full of gratitude from all of the love and support that came pouring in.  The fantastic team around me got me here and this win undoubtedly could not have happened without them.  Josh and I have been working towards this for almost 10 years and what a joy it has been to share this incredible moment together.  Now, onwards to Tokyo!!! 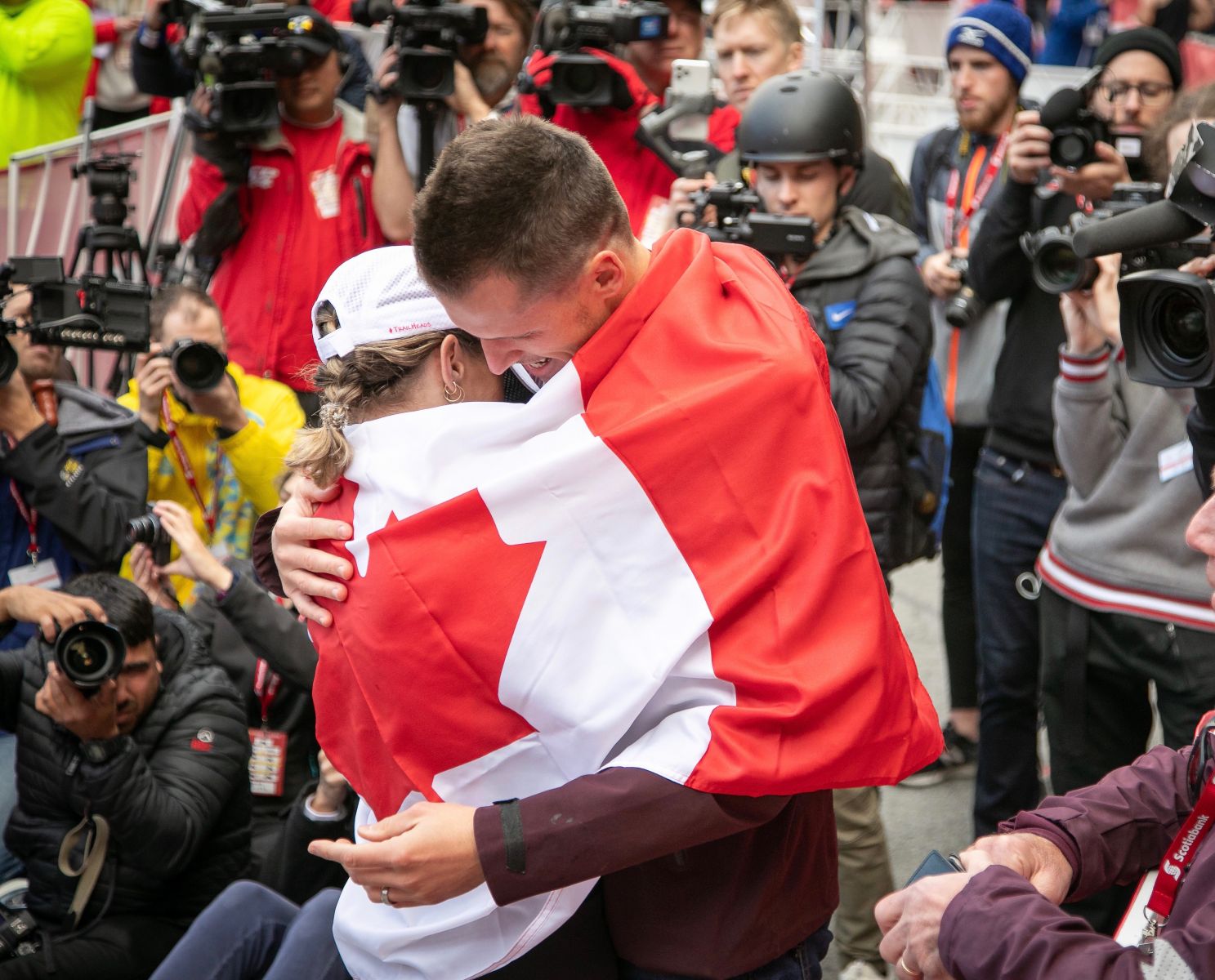