Since my last post I have raced three times (sort of). . . Coming off of Around the Bay at the end of March my recovery was hampered by a cold and I missed many of the key workouts that would have infused my legs with the 10k speed needed going into Sun Run and TC 10k.  Needless to say, for these races I felt flat and performed poorly.  I was 8th overall at Sun Run and ran over a minute slower than my goal and I dropped out of TC 10k at about the 6k mark.  My frustration was at an all time high.

Going into TC 10k I knew I was still fit and had proven that with a solid Wednesday workout but at the race my legs were dead weights.  Maybe I was putting too much pressure on myself or maybe I was having a hard time recovering with my lingering sickness — whatever the case I was about to throw in the towel for the spring season and I was certainly thinking of not racing BMO Vancouver half the following weekend. 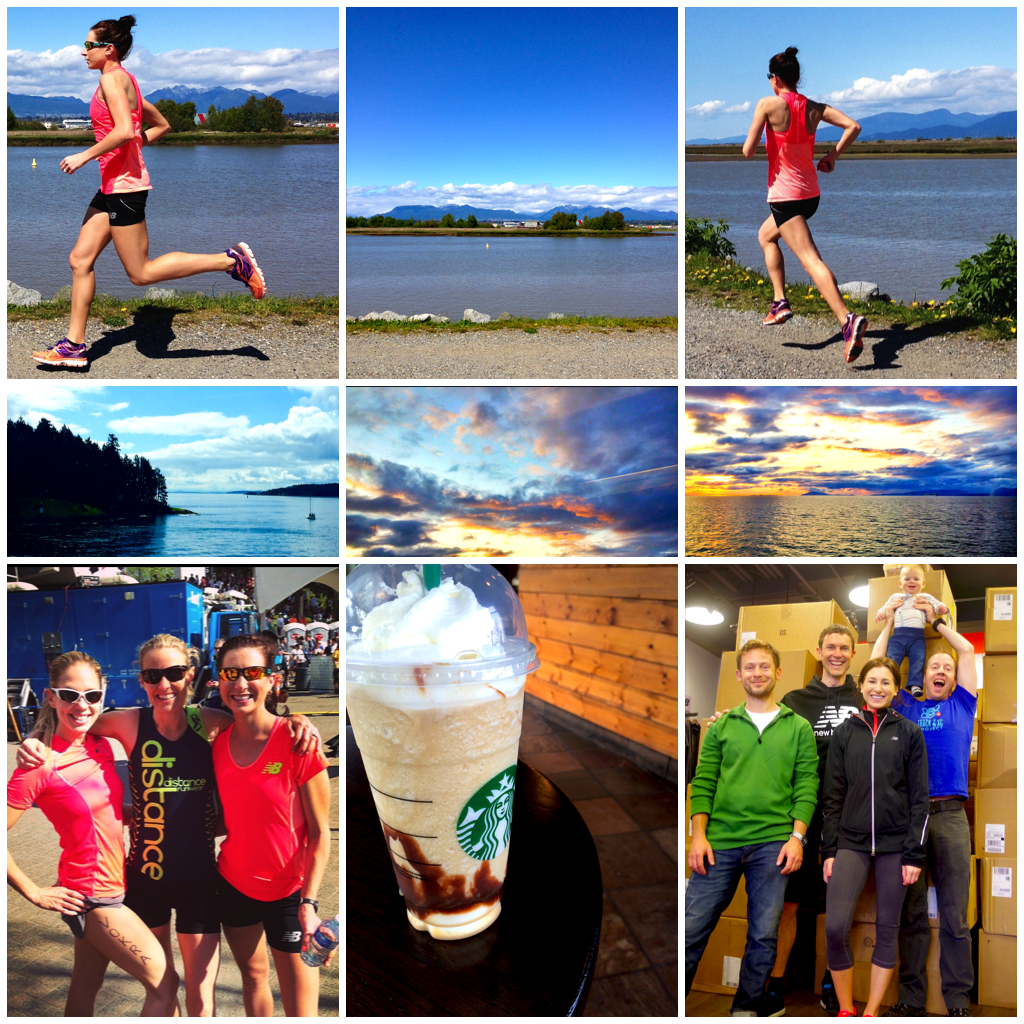 ^^^Training along the Richmond dykes where it is flat and quiet and our road loops are tough to beat.

^My wolfpack after Sun Run - they both had stellar races:) Who doesn't love a post workout s'more frapp? And, our hard-working crew as we get NB Nanaimo ready for opening day!

My decision to race or not to race flip flopped over the week.  I ran just easy mileage and no workouts as I tried to find my legs again.  I was working in Nanaimo for several days to help open the New Balance store there and this kept me very busy which was exactly what I needed.  The days leading into the race we decided to give it a go and just use it as a workout.  Josh said my goal was to run evenly and not implode the last half of the race when the course gets challenging.  By doing this at least it would give us a good gauge as to where things were at.  We thought that 1:15 was a substantial goal for this race-workout, with 1:14 being on the fast end of things if I felt good.

From the gun I ran with basically no pressure on myself at all.  I did want to be top Canadian but essentially I was just taking every 5k split and trying to run evenly for the last 3/4 of the race.  The first 5k is quick as it begins with a solid downhill down Cambie so in this first portion I stayed relaxed and tried to keep things subdued as I split through in 16:37 a couple steps back from 1st and 2nd.  The next segment was 17:34 from 5-10k which was fine and actually on the faster end of the pace goals.  At this point I had completely let 1st go as I knew she was going after the course record.  An American named Allison Macsus and I continued to go back and forth for 2nd and 3rd position throughout almost the entire race.  She tended to gap me on most of the uphills and I usually closed the gap on the downhills.  It was mentally tough to continually battle with someone but it kept us both on our toes.

Heading into the hills of Stanley Park I knew this would be where I would have to dig a bit.  I wanted to keep my splits even and I managed a 17:43 for 10-15k — within the range of what we wanted and not bad for the hilly section.  Allison and I were still back and forth and I was starting to worry about trying to out kick her on the very uphill finish in the final kilometre.  So many times in the park I was gapped by so much that I thought to myself “well, third is okay . . .” and then she would come back and I would have to fight again.  I think it was in the last 3k or so that I noticed the gap was widening and it was now or never.  I pushed and just hoped that I had enough to hold the lead over her in the final uphill coming off of the sea wall.  The last thing I wanted was to get overtaken in the last stretch. Coming in I was surprised to see 1:12:xx on the clock as I was finishing up the hill and overjoyed with my final time of 1:13:14 (17:26 for 15-20k) for 2nd overall and 21 seconds back from 1st.  This was my second fastest half marathon ever and the fastest I have run since the fall of 2011 when I set my pb of 1:11:45.  Way faster than I had hoped and a great place to start from as I gear up for Canadian Half Marathon Champs in Calgary at the end of May!

I feel reinvigorated after this race — excited and hungry for more.  It took a couple of downs and then one big up to get my head back into the game.  Since the race I have logged two solid weeks of training and have one more big week ahead of me before I back off a little leading into Calgary.  Next weekend I am racing a local 8k as a workout and a chance to get in a good effort as well as a few more Timex series points.

The fire has been lit and I am looking forward to seeing what I can do over the next couple of weeks!

^^A group of the elites at the pre-race VIP luncheon.  I am sandwiched between Allison Macsus who finished 3rd and Jane Murage who was 1st (p.c.: Jim Hinze)