A little late getting this recap up but here is my synopsis of the Edmonton Half Marathon a couple of weeks ago.  Going into it I had been struggling with several weeks of fatigue, and though I had really started to feel better the week prior, I was still concerned that I could have a poor performance.  Thankfully the race turned out to be a confidence booster! 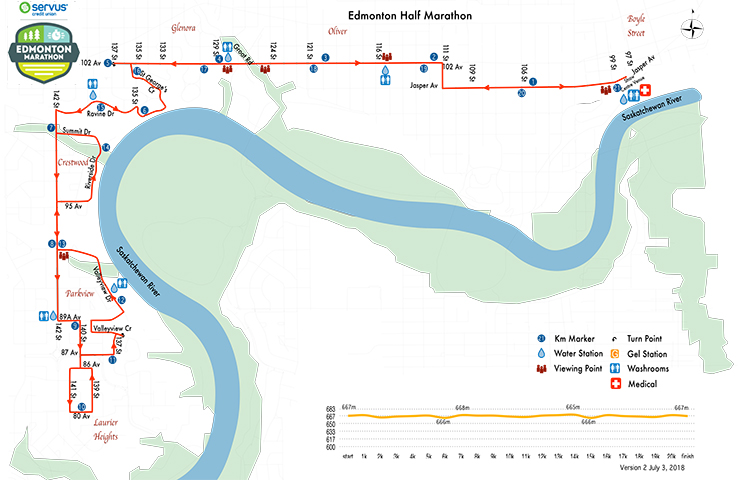 At the gun we bolted off the line much faster than I had anticipated.  Emebet Anteneh (an Ethiopian now living in the Toronto area) really took it out, shadowing one of our male competitors with Rachel Cliff a few strides behind.  The first 5K had some downhill segments so I used those to help bridge the gap back to Rachel and then to get us tucked in behind Emebet and her, at the time, run bud.  I knew the longer I could be in the group, the better.  That said, when I glanced at my watch as we approached the 5K marker I panicked a bit and immediately backed off the pace, separating me from Emebet and Rachel.  Perhaps that was my biggest mistake of the day.  Going into this race my expectations were low and I thought the pace we were going would be too hot to handle.  I also thought that someone in front of me would suffer and would come back to me — I’d be ready.

Not much happened here.  I was happy to still have Rachel in my sights.  Emebet had continued to press and Rachel was a bit back from her.  The distance had not grown much since I backed off at 5K.  Initially with my panic I thought that I would die and be caught by some runners behind me, but refocussing I knew that if I kept working hard and looking ahead I was on track to run a decent time.  So instead of thinking about what was behind, I tried to focus ahead.

I could still see Rachel.  It seemed like we continued to run a similar pace through the winding neighbourhood roads.  I knew I was still on track for a good time and that kept me motivated. 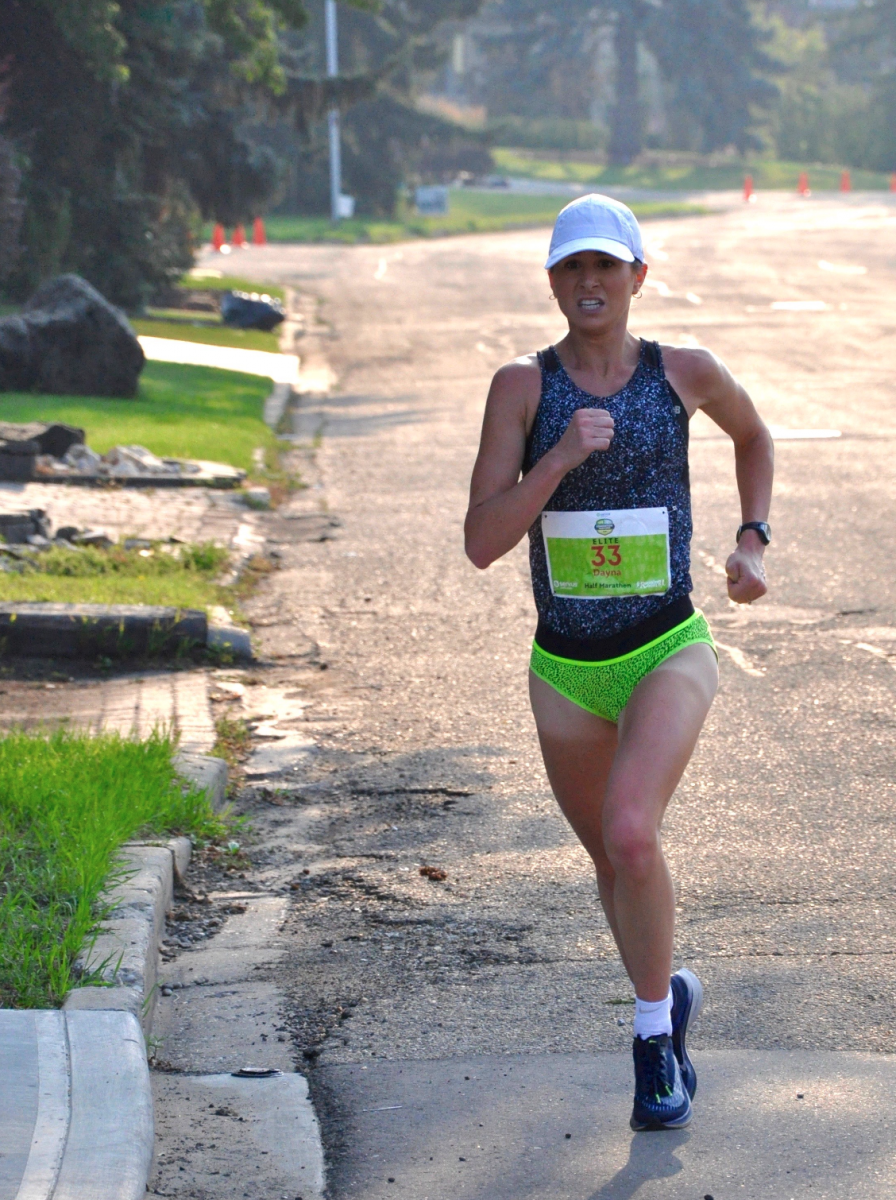 As we headed into the final, long straightaway which included a lot of uphill (the same hill we descended in the first 5K), I could still see Rachel working away ahead of me — the gap, unchanged.  We were obviously just working hard to get to the finish line.  Emebet was quite a ways ahead and had continued to extend her lead.  I felt surprisingly strong, I don’t think I could have found another gear, but my legs didn’t feel as fatigued as they sometimes do towards the end of a half marathon with an uphill finish.  Nonetheless, I was eager to get the finish line and stop.  I could hear the announcer welcoming Emebet to the finish in 1:11:23.  A short while later Rachel crossed in 1:12:20 and 18s later I came across the line.

With my low expectations going into this race I was ecstatic to run a season’s best time.  I’m also pleased with how my body felt doing it.  My legs felt strong and that gives me confidence as I go into Chicago Marathon. 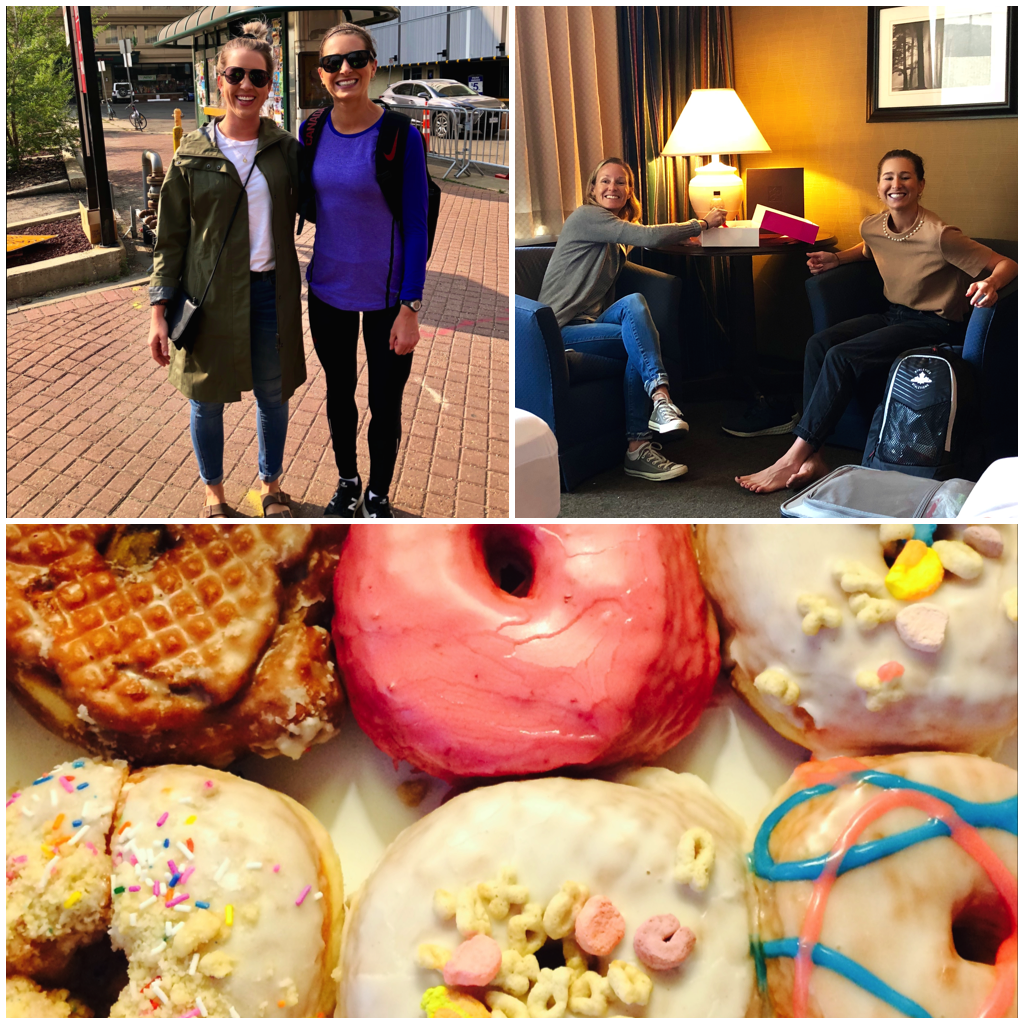 ^ So great to visit with the sister again -- she even provided us with post-race doughnuts to share:)  Cath and I could not have been happier!!!

The post race recovery went well, and I resumed workouts later in the week.  Unfortunately, by some fluke, I managed to get a micro-tear in my left gastrocnemius belly (I’m attributing it to doing deadlifts in the gym and shortly after, a treadmill run.)  Obviously not an ideal situation when you are 6 weeks out from a marathon but after some brief panicking I got to work cross-training.  A couple of days off running I could still feel it when I tested it out, so though distraught, I continued to work hard on the bike and after 6 days of cross-training had passed I was completely pain free.  I hope that my hard work on the bike has kept my fitness levels in check.  During those 6 days off I managed to get in three intense bike sessions and just under 17h of riding total.  It felt like I didn’t go outside at all since these were all done on my road bike on the computrainer!

This week has been a cautious progression to more running.  We’re keeping it on flatter terrain to stress the calf less and that has meant a lot of treadmill running which I don’t mind so much (minus it feeling like heat training).  If all goes well this week we’ll be back to a full running workload next week and we’ll be full steam ahead for Chicago.

Maybe I lost some momentum in the last week — perhaps my fitness will not be what it could be on October 7th.  What has kept me going, however, is knowing that each marathon is a chance to learn, and each build is a chance to gain fitness and mental fortitude.  I have to remind myself that it’s more about working towards becoming the best runner you can be, not the best runner at one particular race.  So if I can pick up the pieces and toe the line in Chicago this fall, then that’s another chance to better myself.  And that’s a chance I’d like to take.