So I usually skip all of the boring travel and pre-race chit chat and get right into the race.  This time, however, I feel it is necessary for me to include a few extra details.  Firstly, this will help me put things in the proper context and secondly, it will remind me to plan things out differently in the future.

Here we go.  The Indianapolis Mini Marathon (a half marthon) is on a Saturday.  The plan is to fly out on Thursday, have the day in Indianapolis to recharge, and then race on Saturday and promptly fly home.  All seems pretty standard prep for a half marathon.  Without a direct flight I knew it wouldn’t be the shortest trip but I didn’t expect things to be as rough as they were.  In summary, we left our house at 4am in the morning and after delays in San Fransisco, finally arrived at our hotel about 15 hours later.  The 3h time difference had us getting to bed after a late meal after midnight (EST).

As we were being pummelled my goal was to try to look at these unexpected events as a great opportunity to roll with the punches.  Regardless, I felt fine on my shakeout run on Friday.

Race morning came.  I was up at 4:30 to get in my usual breakfast and coffee three hours before the 7:30 race start.  The gusty winds from the previous day had subsided, and to be honest it was perfect weather, albeit a little humid.  I felt fine on my 4K warmup and after drills and strides I was ready to go.  Now I wanted to take chances in this one, knowing that I had the freedom to do so.  If I felt good I wanted to aim high but of course that always depends on how you feel.  I can always tell in the first 5K if it will be a day where things flow.  So if that was the case — and I sure hoped it would be — then my goal was to target the course record of 1:10:59.  My aim was to keep my miles between 5:20-5:24. 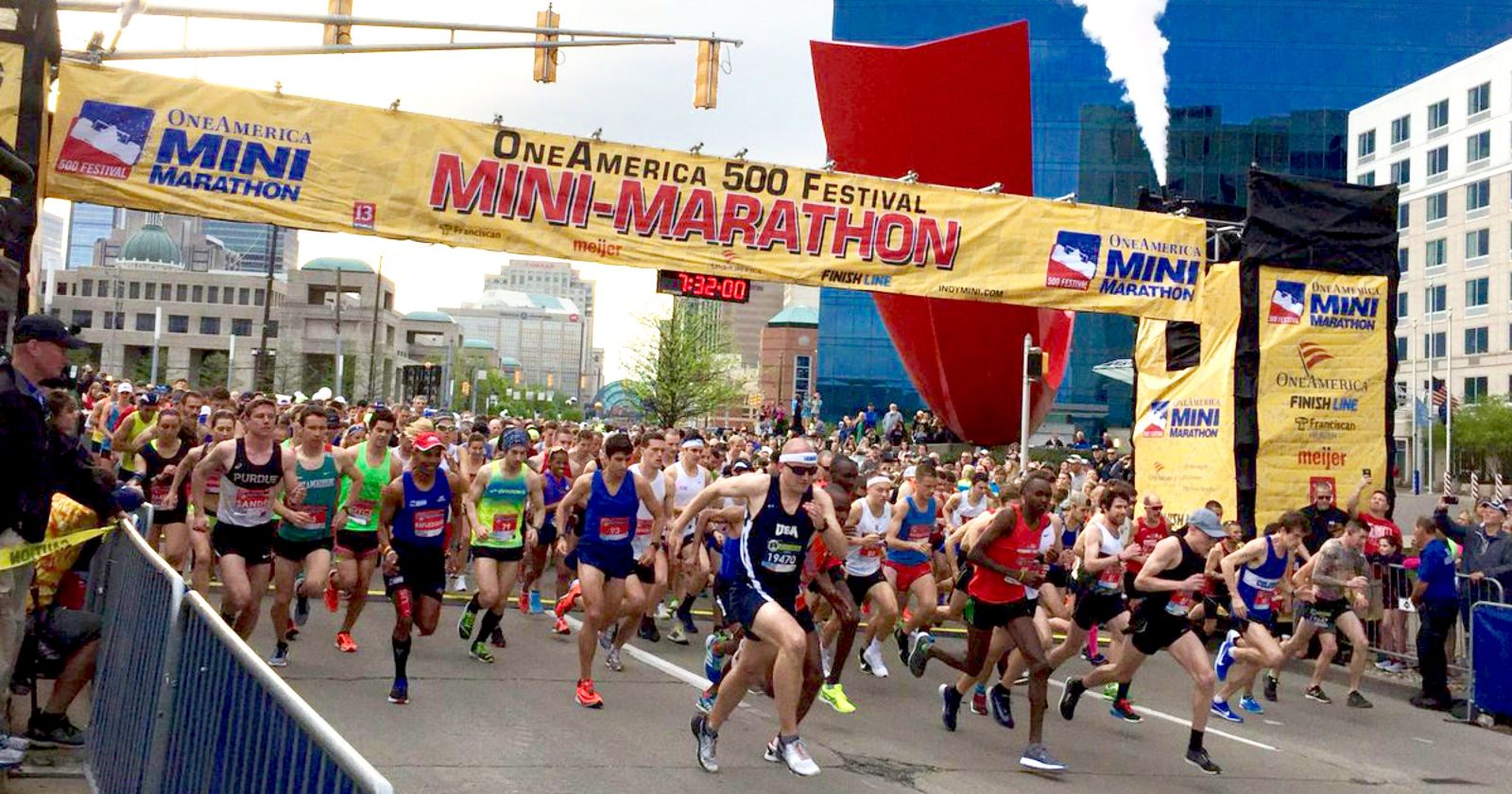 ^ The start.  Interestingly enough, the Indy Mini Marathon is touted as being the largest half marathon in the USA! (pc: Jenna Watson)

At the gun I went for it, knowing that sometimes it’s more of a challenge for me to get my legs moving from rest.  I went through the first mile in 5:20, the second mile in 5:20.  On the fast side of my target but even so, I immediatley I knew it wasn’t going to be an easy day.  I felt tired.  It did not feel like it was flowing.  At this point I abandoned the record-breaking attempt.  Perhaps I should have shifted to aiming for a new pb but my all or nothing mentally that day just shut my mind off to the mile splits.  I began to just focus on the win.

Not much to report here.  The course made its way northward towards the Indianapolis Motor Speedway.  I tried to find a comfortable rhythm.  I felt fine.  It’s hard to explain — best way to put it is that I didn’t feel like pushing — mentally or physically.

The majority of this segment was on the Speedway itself.  It was quite the atmosphere, lots of people out on the course cheering and the nice smooth road was a runner's paradise.  Right before heading onto the track Meb passed me, leading a massive pack of guys, and said some encouraging words including “Relax your shoulders.” (Funnily enough, a lot of that pack ran exactly what I had wanted to run and in hindsight I should have asked what people’s time goals were before the start!)  Anyways, thank you Meb — I relaxed for about 15s before probably tightening up again;)

It was between about 13-17K that my stomach started churning.  I knew I had a decent lead so I started to prepare myself if I eventually needed to hop into a port-a-potty at one of the aid stations that pop up every mile.  I asked my bike escort where 2nd place was on the course and he said at least 4min behind.  I certainly felt better knowing that I had time if need-be but within a few miles my stomach pains had subsided and I was able to get my rhythm back.  During these 4 kilometres or so, my pace had slowed substantially.  Thankfully, I was able to get back on track in the final stretch of the race.  I felt strong and my pace over the last couple kilometres showed it. 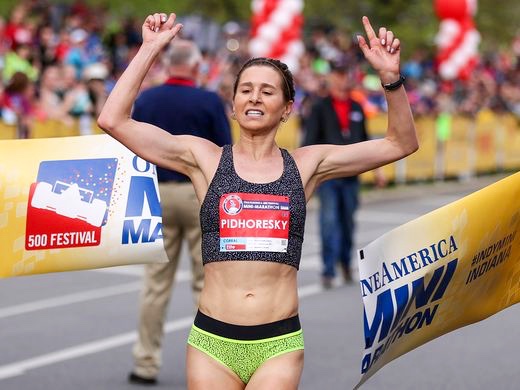 Breaking the tape is never something I take for granted.  I was thrilled to walk away with another win after three weekends in a row of racing.  I’m pleased with my time (the second fastest half I have ever run) especially considering the long travel day and time-change.  Of course I am disappointed to not come home with a new personal best — I certainly know I have it in me!  Mostly, I regret not being able to take full advantage of my fitness, the course, and the conditions that day.  In hindsight I think I would have needed an extra day in Indianapolis to make that possible. 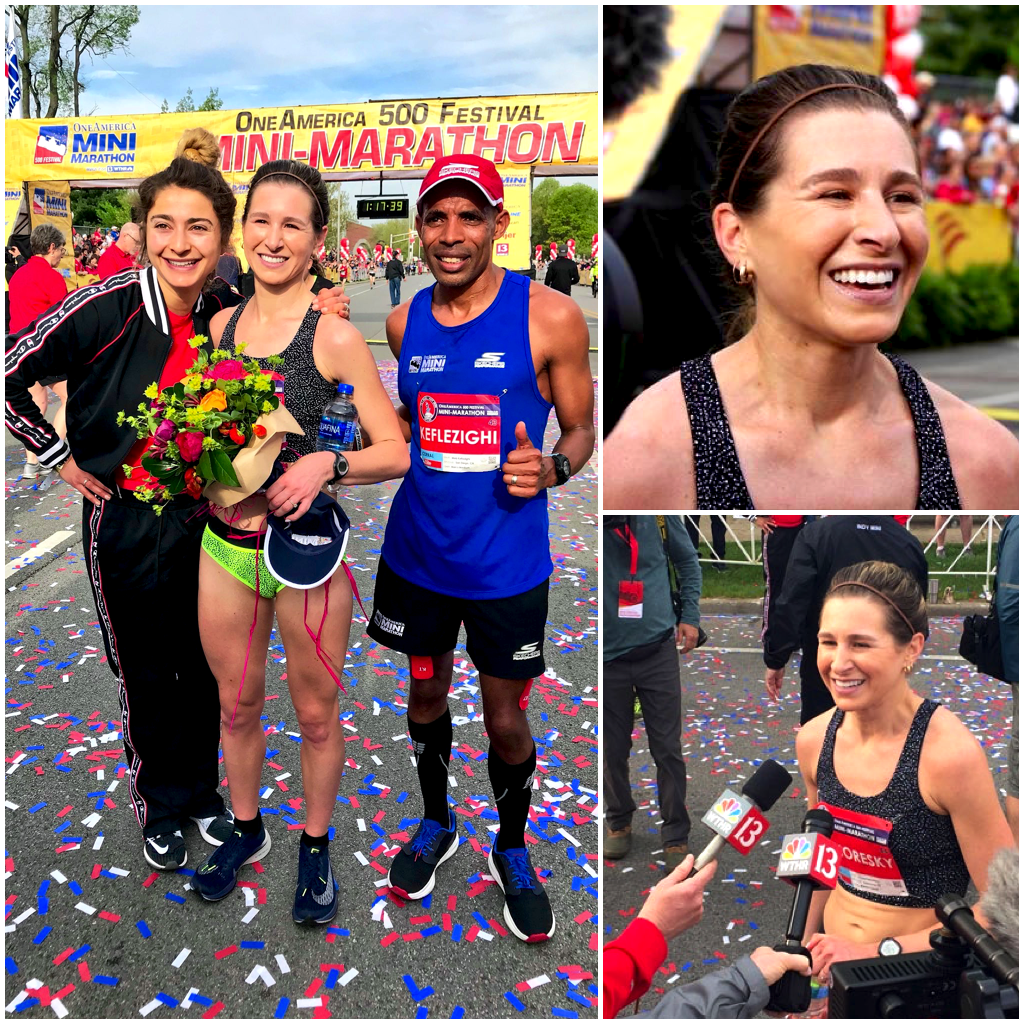 ^ After crossing the finish line I had a brief chat with the ever humble and kind Meb Keflezighi and runner, filmmaker and actor extraordinaire Alexi Pappas (pc: Anne Marie Tiernon)

Next up is the Canadian Half Marathon Championship in Calgary at the end of the month.  I’ve raced the course before, back in 2015, and I am eager to head back.  Certainly the travel will be much easier than this one!  For now we are back in the thick of things after recovering well, and I know I'll arrive in Calgary hungry and ready to race another half.