So a week ago I ran the Corktown 5K in Detroit.  I don’t think I have ever “trained through” a race more -- that being said I was quite pleased with the result.  I ran 16:35 which was good enough for 1st woman overall by a wide margin.  I moved through the race quite evenly and split 5:20 and 10:40, however, I think my lack of warmup strides and drills made a significant difference in how I felt at the beginning of the race.  I only managed to get in an easy 5K jog before scrambling to a washroom and weaving through the thousands to the start line of the corral.  Yes, when 10 000 people are racing it makes it difficult to get to there.

Off the gun it felt a bit fast but I was able to settle in beside a master and try to keep my eyes on the group ahead of me.  I broke away from my little pack I was with between mile 1 and 2 as I put my head down against the gusting winds.  The course did a little lollipop of downtown as it headed back toward the start.  At times it felt like a wall of wind was against me and I thought Josh was going to fly by me at any moment!  I tried to keep pushing and aimed to pass all the teenage boys in front of me in the last mile.  Success! I caught them all and finished strong in 7th place overall.  It was nice to see several other Windsorites at the finish line -- they are fun and so encouraging!  We certainly had a strong contingent there.  After a 10K cool down through the very crowded streets we headed home across the border.

Leading up to this race I had a heavy week of training including a Tuesday hill workout and very intense Friday session on the track.  Now Friday was the highlight of my week and going into this 8:30 am workout I knew it was going to be challenging but had yet to be told any of the details for the session.  After warmup Josh informed me it would be 1K repeats at 90s rest . . . until fail or until the max rep was reached.  Goal pace was around 3:24.  So off I went and felt really good, easily floating along and firing off 3:22 over and over and over.  I was losing count -- which was probably a good thing but I kept thinking “How many more of these do I have to do?  This has to be close to the last one!”  But no.  Around rep 14 I started to get a bit anxious, a little frustrated, and a bit heavier in the legs.  I regained my focus though when I reminded myself that this is when the workout starts to count -- to make you a better runner.  If the whole workout was easy what would be the point?  So I pushed on and my times remained the same -- all within the 3:21-3:23 range.  And then it hit me -- rep 17 was hard and I don’t know if it was mental fatigue, physical fatigue, or a combination of both but all I knew was that 3:24 felt tough.  Rep 18 was next and my legs and upper body were choppy and my times were all of a sudden dramatically slower.  That was the end of the workout for me.  3:29 meant I had failed as Josh told me then that 3:28 was the cut off time (20 reps would have been the max.)  This workout was by far my best workout of the year and even though I had failed I knew I was a better runner for it. Truthfully, if I had known beforehand that I had a workout consisting of 18x1K I’m not sure I would have been able to accomplish it.

So next up is Around the Bay 30K.  I’m excited to get to the line here and be able to put forth an effort that reflects the hard work I have put in over the winter.  I know I am fit right now, perhaps the fittest I have ever been, so it will be nice to race a distance that my training has been geared toward. It will be especially nice to be able to taper slightly for this race!  Fingers crossed I can pull out a new pb here but we’ll have to wait and see.  Good luck to everyone else racing next weekend -- Spring Thaw 5K or ATB.  Until next time! 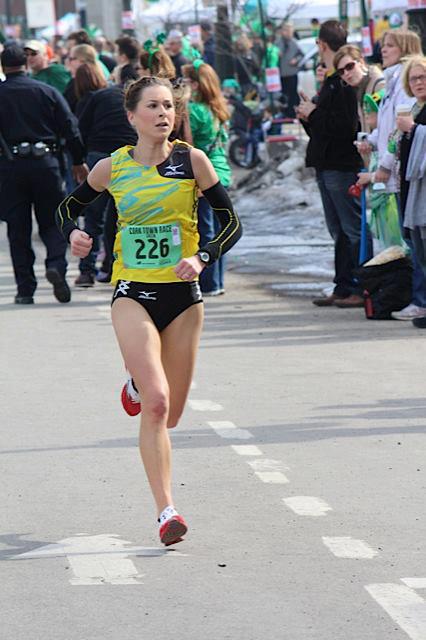