Just six days after the Around the Bay 30K I laced up to race on the hilly roads of High Park in Toronto.  It was a race I decided to stick around for whilst staying with my parents in Windsor and was a perfect opportunity to get in my first Canada Running Series race of the year.  The Race Roster Spring Run-Off 8K is a challenging course that makes it feel more akin to a 10K road race — especially with my still-fatigued quads.  It was my fifth time racing this event so I was very aware that I needed to up my recovery game post-30K in order to survive the relentless ups and downs of the course. 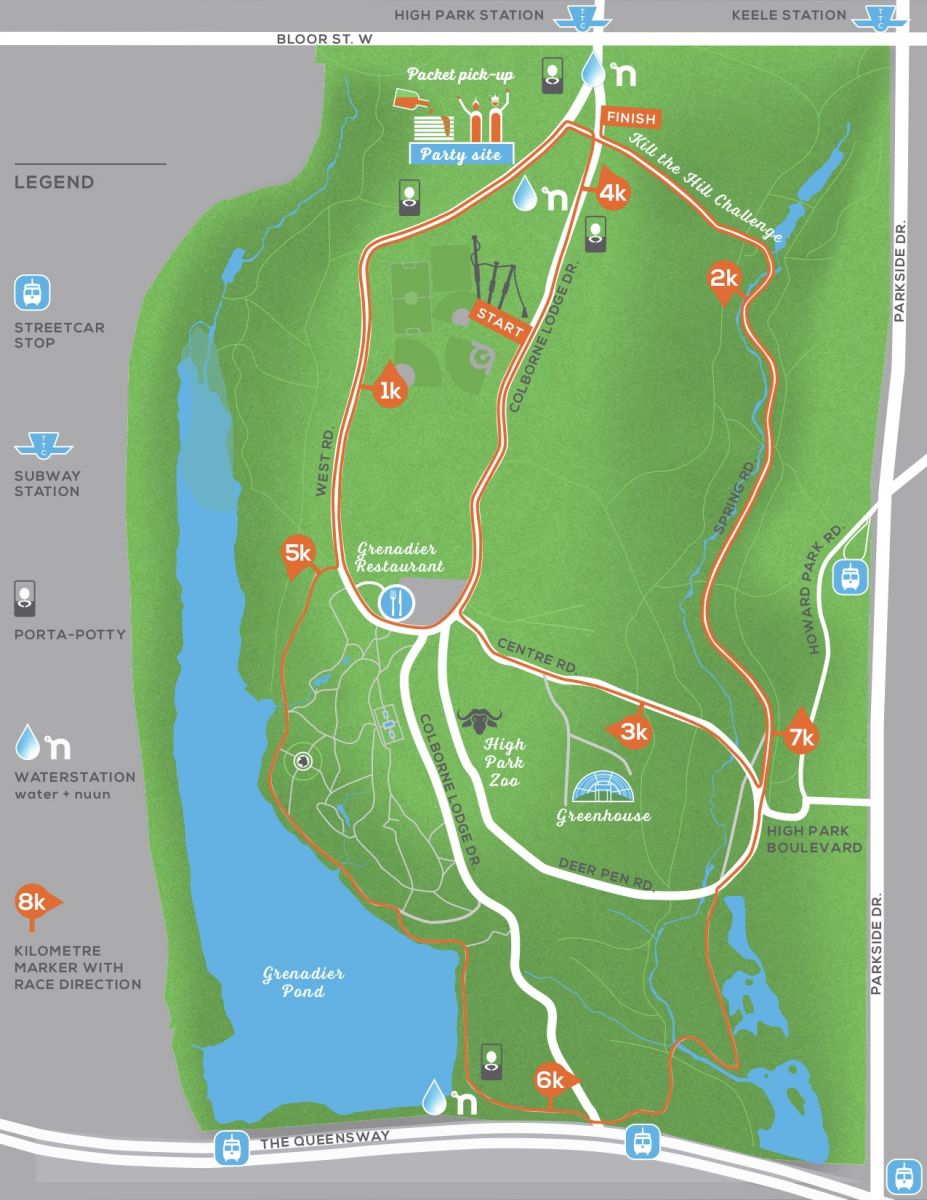 Thankfully, coming into this race my muscle-soreness had dissipated.  When asking for some pre-race guidance Josh told me to run like I did the last 3-4K of Around the Bay = hard.  This advice seemed a little disturbing at first because, that’s a lot of discomfort, but it certainly made the race easy knowing that I had only one goal — to run hard the whole time.

It’s hard to break down a race as short as an 8K in much detail so this race recap will be fairly brief.  Furthermore, the pain of racing something so short seems to leave me with less detailed memories — probably a bit of self-preservation going on there! 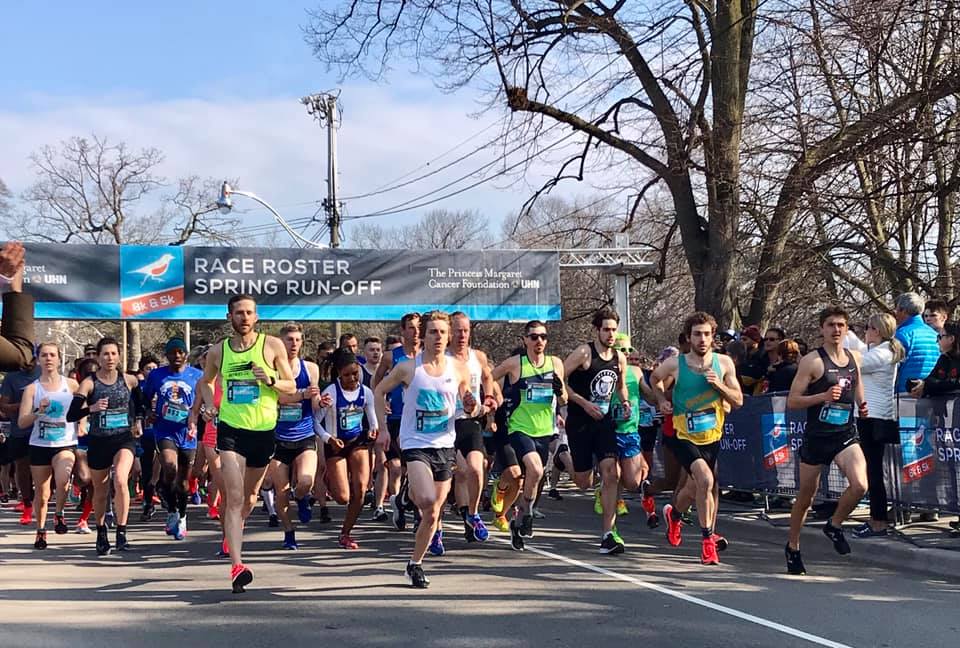 Going into this race I knew I would have to work very hard in order to squeak into the top three, and even that wasn’t a given on a good day.  From the gun I got out hard, getting off the line quickly to create some space on the narrow road before the turns started.  I was behind Sarah Inglis (a super speedy Scot) and Mengistu Emebet (the previous weekends 30K winner) and feeling pretty good.  We went through the first kilometre in 3:08.  I lost a few seconds to the top two women in the next couple hundred metres and went through the mile in 5:11 with Tamara Jewett, another fast woman who trains in the Toronto area, right by my side. 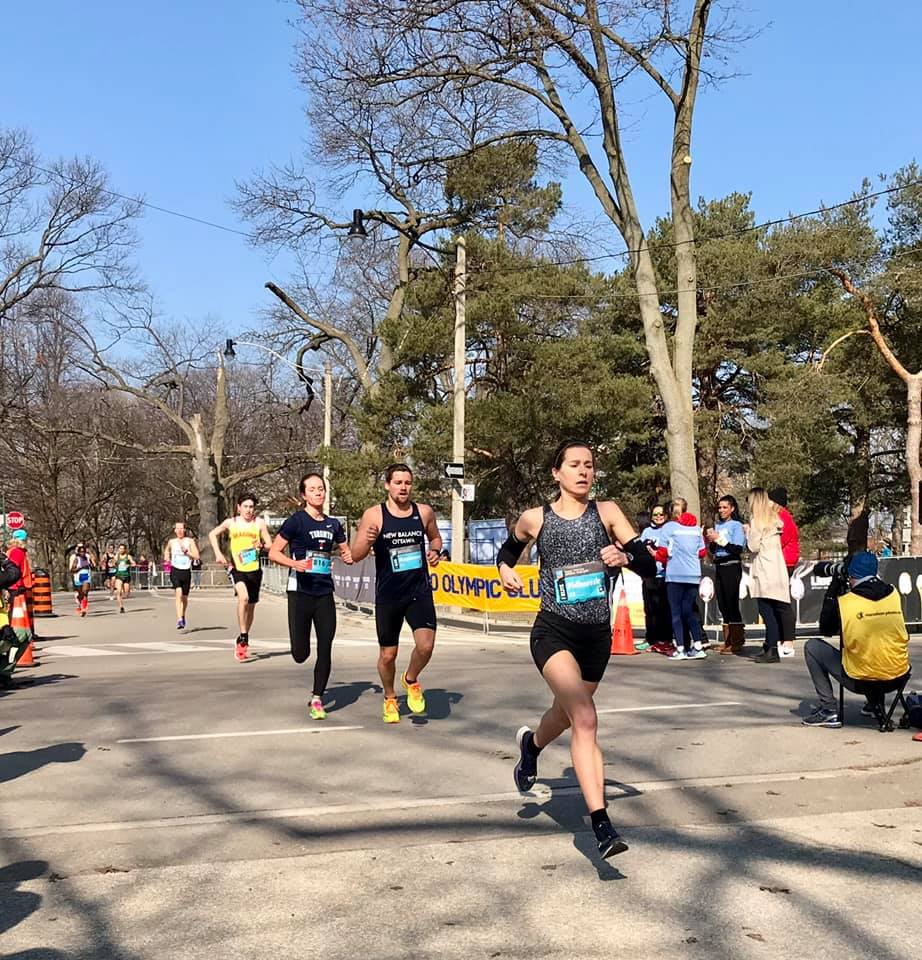 ^ Early on with Tamara close behind. (pc: Alan Brookes)

By 4K I was 5 seconds back from Tamara in third place.  The undulating terrain was challenging on my still-fatigued legs.  Yet every time I asked myself “are you going as hard as you can go?” my answer was always “yes.”  It’s tough to be in that scenario, maxed out and unable to respond to moves made around you during a race.

I kept working.  Calling on my glutes to take some of the load off of my poor quads.  Only three kilometres left to go with the final km being almost solely uphill.  I listened to the crowds, drew from their cheers — willing their energy to flow into my ragged body.

I asked my body again “is this all you have?”  Again, “yes.”  So working with what I had on the day I kept moving forwards as best I could.  Down, around, up and over the course is reminiscent of my cross-country days.  Finally, I spotted the 7K marker and prepared myself for the uphills toward the finish.  I could see the top women battling it out and Tamara was still several seconds ahead — not something I anticipated being able to catch.  Crossing over the first timing mat into the “Kill the Hill” segment I beckoned my legs to lift up the steep escarpment.  Thoughts of potentially walking up faster crossed my mind for the second weekend in a row.  Then it was a sharp right hand turn into the finish line which appears much quicker than you imagine.  Done. 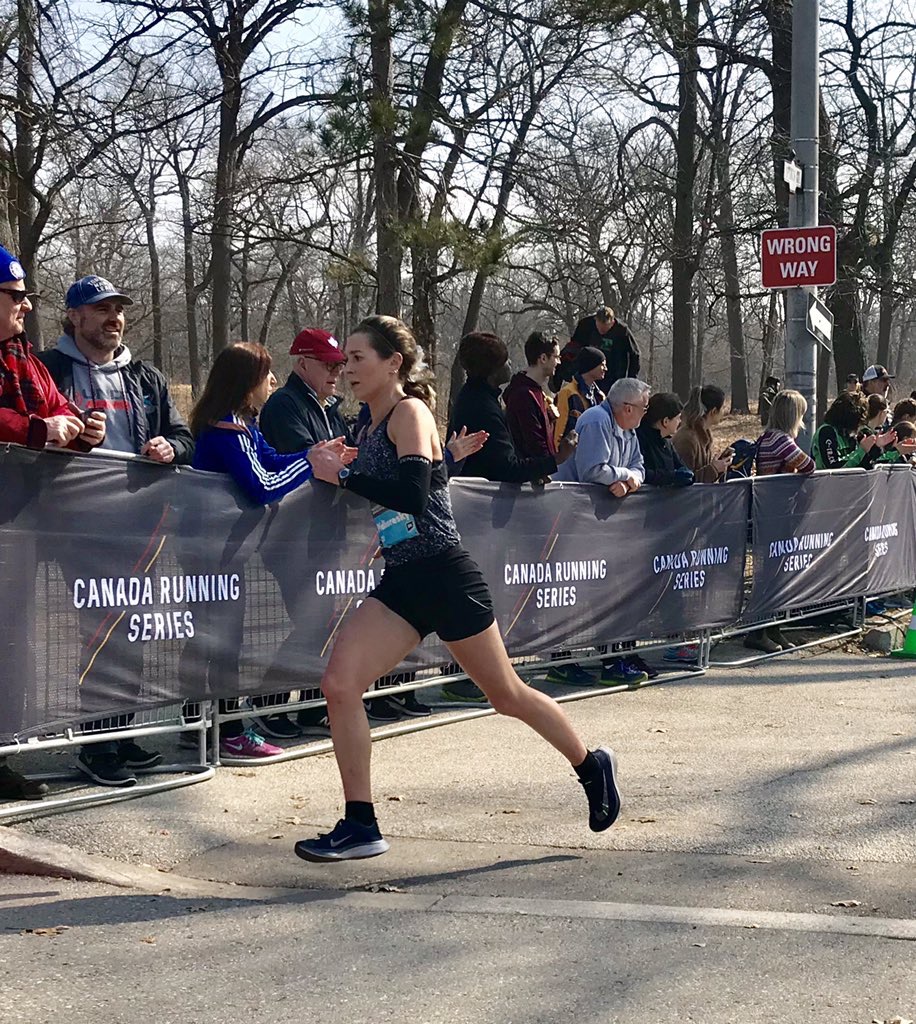 I was satisfied to know I gave it everything I had and pleased that included a new course personal best (previously my fastest time on that course was 27:31 and had not included a 30K race 6 days prior.)  Another suprise, I had the 2nd fastest "Kill the Hill" segment which is slightly hilarious when I think of how slowly my legs felt moving up it.  Looking at my first half and second half splits of 13:24 vs. 14:05 -- it's not the worst when considering the steep climb in the last kilometre.  I'll take it!  And lastly, I especially enjoyed having my parents there watching -- laughing when my dad said “You did not look like your usual, smooth self but you ran so well!”  Uh thanks Pop Pop . . . 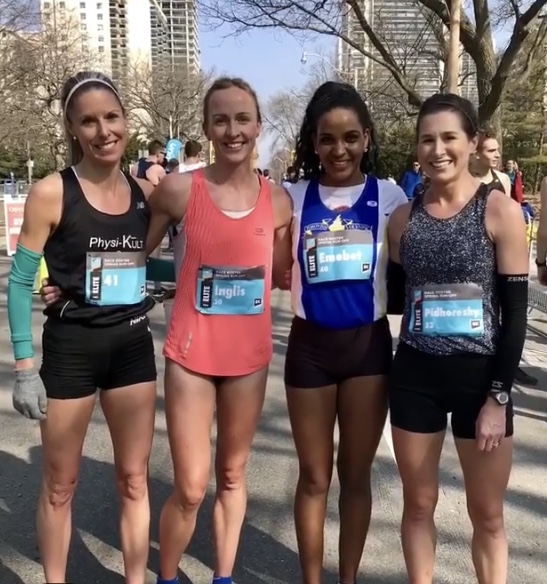 The burn, though painful, is something you want to get comfortable with — it's something that is more challenging to mimic in workouts which is why races are so helpful with this process.  I welcome the pain because I know that it makes my mind stronger when I choose to embrace it, rather than flee from it.  Because what is discomfort?  It’s pushing boundaries, strengthening the mind and the body go further and faster, so that next time, maybe, you can squeeze just a little bit more out of yourself.