So let’s start a few days ahead of time instead of jumping right into the race.  Josh and I flew in to Ottawa on Wednesday evening, a day before we would usually make the journey to give me an extra day to adjust to the three hour time-change, a challenge when the race starts at 7 am.  Things continued to go smoothly while waiting for race day to arrive: my legs were feeling good and I was remaining calm and relaxed.  I’m pleased with how I managed my nerves and anxiety which so often sends me reeling leading into big races.  I was able to sleep the best I ever have pre-marathon so that is an encouraging improvement to take away for future races!

Race morning was early.  I woke up at 3:30 and looked outside to see pouring rain that was forecasted to subside by the time we left the hotel to walk over to the start — and it did.  It left however, a lot of humidity (96% was what I heard).  My nerves continued to stay at bay as I warmed up with Krista DuChene and Rachel Hannah,  I think it’s such a pleasure to be able to warm up with someone you know before a big race.  Fifteen minute jog, drills, a couple strides and I was ready to roll.  I had a pacer, Chris Balestrini, who was willing to help take me through half.  My hope was that we would aim for 1:14:00 and there were several other men who were planning to go out in around that pace as well.  My goal was to be able to walk away from the race with my A goal of Olympic time standard (sub 2:29:30) or my B goal of top 5 which would also count as Olympic standard since Ottawa Marathon is an IAAF Gold Label race. 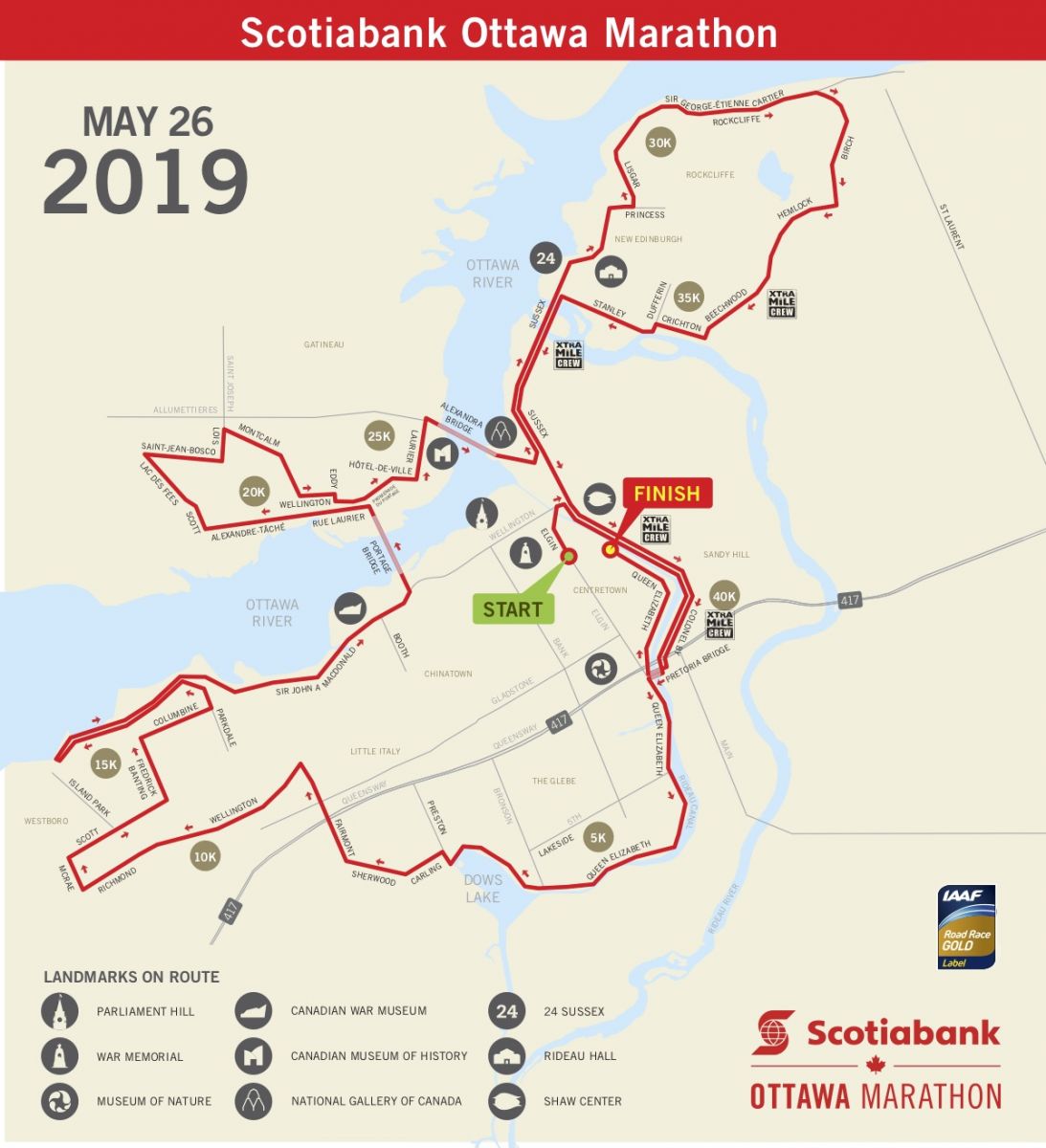 Off the start we settled into a perfect pace.  I watched as a group of 9 women faded into the distance — their pacers were targeting 2:24.  Everything felt easy although I noticed the wind was strong.  I got in my nutrition at the 5K bottle table without any issues.  I was in 10th place.

We continued on and I had a sizeable pack of men around me.  I remember looking around as we approached the 10K fuelling table and several of the guys looked like they had jumped in a pool.  They were drenched.  At this point I thought that maybe the humidity would play a bigger role than I had anticipated.  Nonetheless, I got in my bottle, drank my usual amount and we kept moving along.  We passed an elite woman on the side — I was now in 9th.

I kept reminding myself to tuck in during some of the windy sections.  I think that I need to practice that more because I often feel much better being able to stride out more freely.  Being able to work less, however, is an important strategy.  I spotted John Mason walking on the side, Reid’s pacer, another indicator that conditions today were not ideal . . . As we approached the 15K bottle station I quickly noticed the tables were missing and our bottles were neatly arranged on the ground in the same organized groups.  Chris sped up slightly to snag mine — thanks Chris!

At this point I was starting to feel my legs struggle slightly on the uphills.  So odd because my main tempo loop this year involved lots of uphills.  Perhaps a symptom of the humidity?  It seemed early to start feeling the fatigue and made me a bit disheartened.  At the same time my stomach was not feeling so hot.  I fell off the back of the pack I had been running in and saw them fade into the distance slowly while still being led by Chris and another pacer who Manny had provided named Jean Marie Uwajeneza.  I told Chris about my stomach woes and he encouragingly said to give it some time as it might go away but to let him know if I needed to stop.  Just before we were to turn left onto Portage Bridge I decided to beeline to the porto potty on the other side of the road (entirely not en route) — 20 seconds later we were back on course heading across to Gatineau.  It was easy decision to use the bathroom.  I could tell that my time goal was not going to be met and I knew that things would only escalate in the discomfort department.

It was disappointing to see my time goal slip away and to be honest my motivation was rapidly dwindling.  We were in the hillier section of the course and my legs were feeling even worse after my bathroom break.  For some reason when I exited the porto potty my legs had developed a heavier feeling than when I had entered.  I was using all my mental strategies to get up the hills.  I had prepared myself to attack in the latter sections of the race and instead my mind just wanted to quit, I didn’t want to fight, I didn’t want to be there.  The demons in my head all told me to stop but I knew that was certainly not an option. 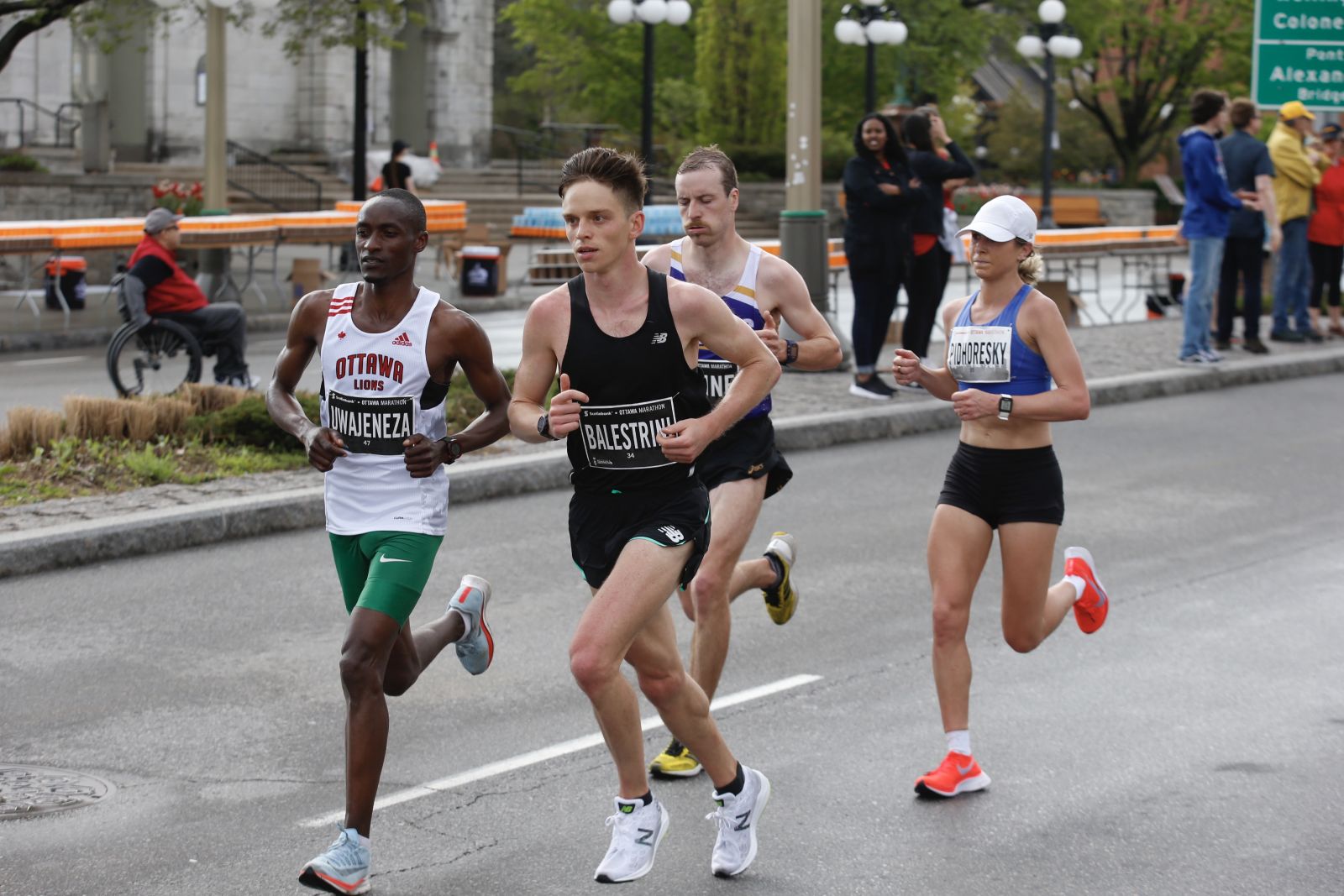 What kept me going?  Well, definitely not my fortitude.  I remember the headwind was very noticeable during this section which was surprising to me since it had been forecasted to be a westward wind which should have it at our backs I thought.  I was struggling and to be quite frank, I kept going because there was a motorcycle camera on me for much of the Gatineau sections.  I definitely couldn’t stop while they were there.  And then there was Chris and Jean Marie who were still with me, albeit probably a bit bored with my slow pace.  On top of that, we continued to pass people who HAD dropped out, who were walking on the side of the road.  So I kept thinking “Top 5 is still within your reach, it could still happen but you have to get to the line.”  Two more casualties were passed in this section and I moved up to 7th.

I wish I had had more drive and grit but I couldn’t override the heaviness in my quads.  Every so often I felt tingles of goosebumps, and twinges in my upper leg muscles, a precursor, no doubt, to muscle spasms, accompanied by a persistent side stitch in my lower abdominals.   Basically I was having a little pity party and having anything but fun.  BUT by 35K I was in 6th place, another one had given in, so I forged ahead in the hopes that maybe by some chance, ONE more would come back to me.  Chris and Jean Marie encouraged me onward and I would have glimmers of feeling good before a slight incline ravaged my quads again and I slowed. 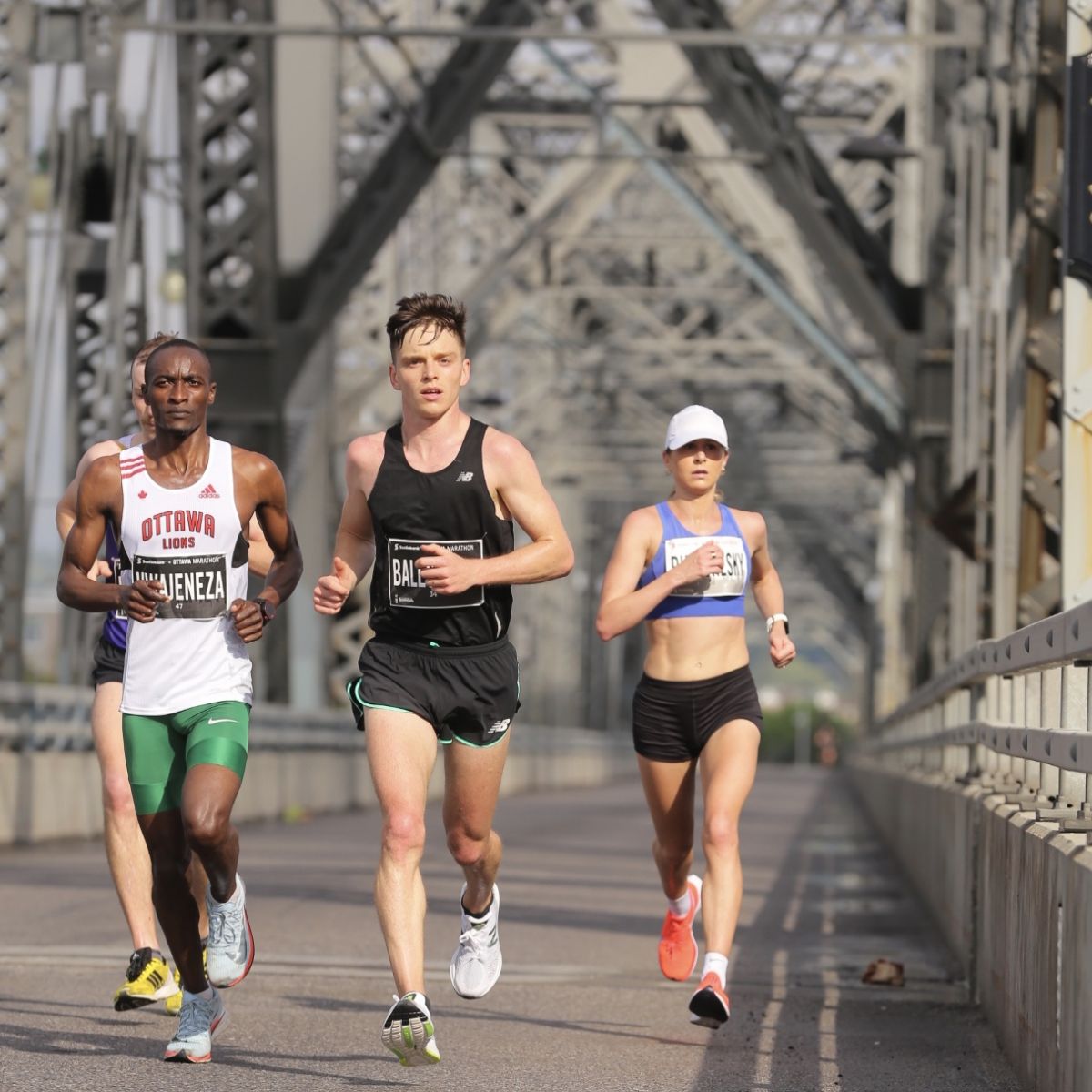 “Just get to 40K” was what I kept telling myself at this point.  I was still in 6th and hadn’t heard anything different.  In my mind I had replayed this part of the race over and over — it was when I would be an assassin, drive hard to the finish, instead I was jogging — willing my heavy legs up any murmur of a hill.  Far from what I expected, far from what I had hoped for. 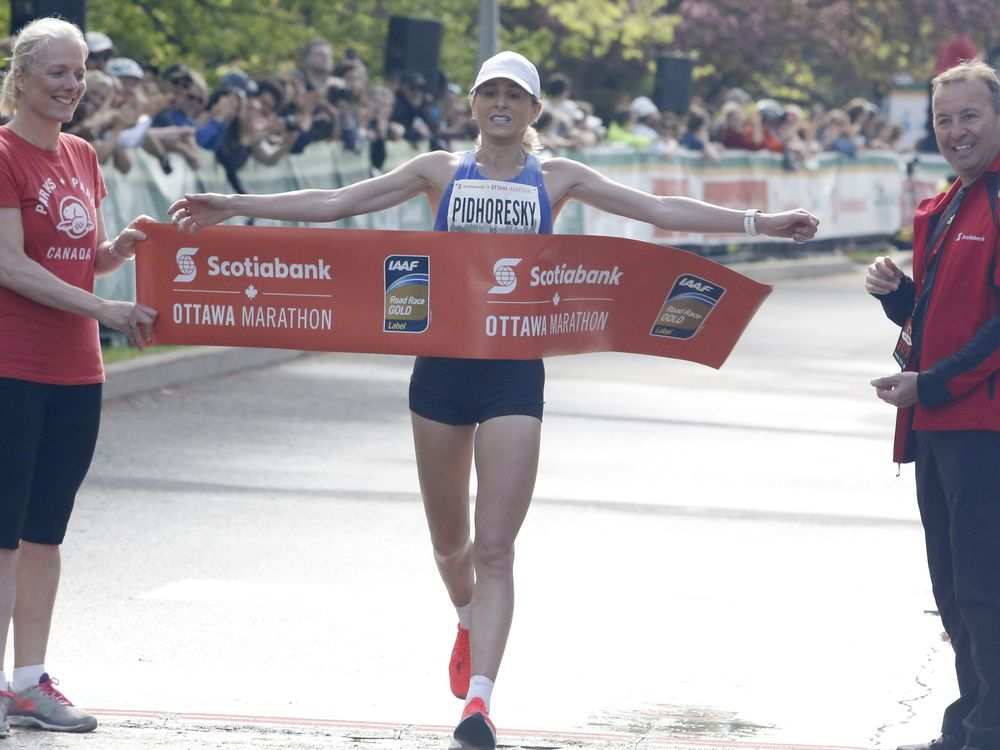 Eventually I could hear the crowds, and shortly after, the finish line came into view.  I broke the tape as top Canadian and I really was proud I toughed it out and finished but my demeanour certainly displayed some disappointment. 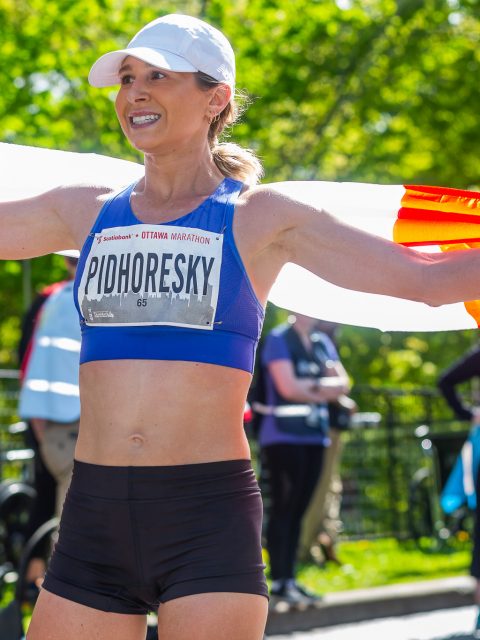 I found Josh and said “I was 6th, wasn’t I?”  So close but yet so very far from what we had set out to do.  I truly thought it was impossible to leave Ottawa without a new personal best but even that was out of reach on the day.  It’s comforting to know that many had similarly underwhelming days, to know that conditions most certainly played a part in how I felt and will hopefully prevent me from doubting every aspect of my training and build-up!  Looking at the numbers I was in 40th place overall and the 10th woman at 5K.  I finished in 23rd overall and the 6th woman.  That’s quite an attrition, especially considering my drastic positive split.

In retrospect I’m proud to be top 6 in an IAAF Gold label marathon, to finish on a tough day when all things screamed at me to stop, and I certainly continue to be aware of the fact that breaking the tape as top Canadian can NEVER be taken for granted — especially ahead of Krista and Rachel!  I know that this build was the best one yet and even though I couldn’t show my fitness on the day, I know I am a better runner at the end of the day.  All we can do is learn from these things and look forward, toward the next race, the next goal. 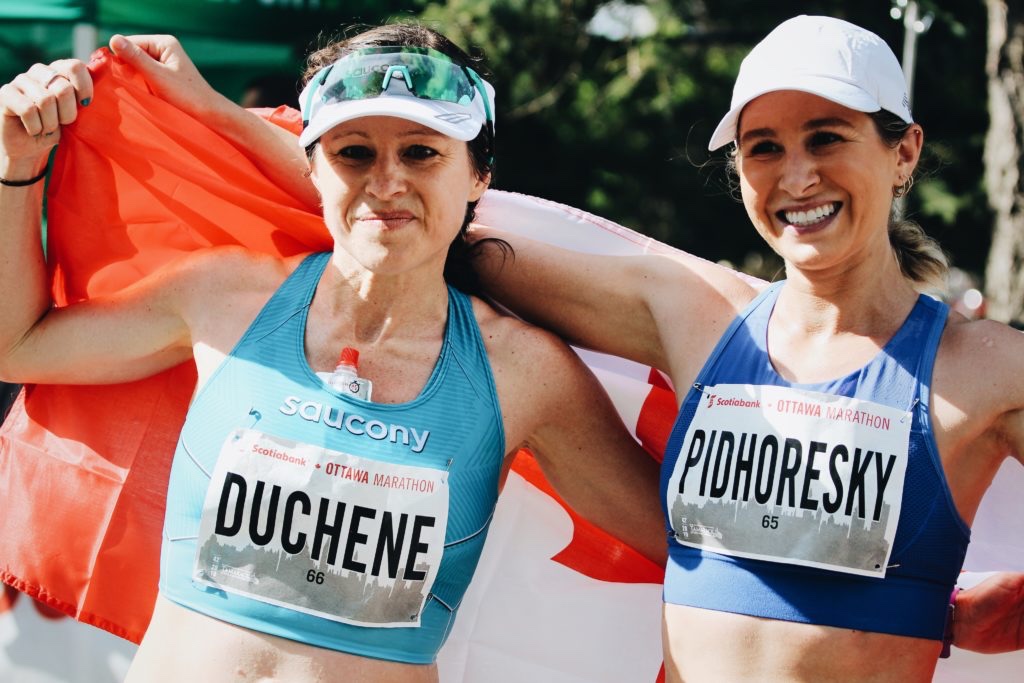 ^ Krista and I sharing the flag at the finish. (pc: Maxine Gravina)

If you were out in Ottawa cheering, volunteering or sending well-wishes from afar I thank you so much.  I felt boundless support out there on race day.  I have no idea how people knew my name as I raced by but thank you, thank you, thank you for all the cheers along the streets of Ottawa and Gatineau; it truly motivated me to continue putting one foot in front of the other.  Of course I can’t not thank Chris and Jean Marie who motivated and encouraged me the entire way!  Thank you also to my support team in Vancouver: Kimen Petersen, Jim Bowie, and Rozeela Nand who kept my body sound during the marathon build, Anne Muscat who helps strengthen my mind (we'll always have more work to do in that department;), First Endurance Canada who I trust to safely aid in my day to day nutrition and recover, and finally, to my coach and husband extraordinaire: Josh.  My main support both every day at home and alongside me in workouts.  I’m sorry I couldn’t show everyone the hard work we put in but eventually I trust the fitness will shine through.  For now though, onwards.