Last weekend was the Canadian Half Marathon Championships in Calgary.  Going into the race I was gunning for the Canadian title — something I haven’t captured since my win at the Canadian road 10K Champs in 2011!  Naturally, I knew I was due for another one.  However, the race didn’t quite go as well as I had hoped . . . let me explain.

My race plan was simple: don’t leave it until the final stretch.  Coming into the race I knew that my main competition would be Sasha Gollish.  She has a phenomenal range and much more leg speed, so it was important to use my strength, not let the race go out too slowly, and make sure I had a sizeable lead going into the finish.  That was the hope at least, but sometimes things don’t quite go to plan. 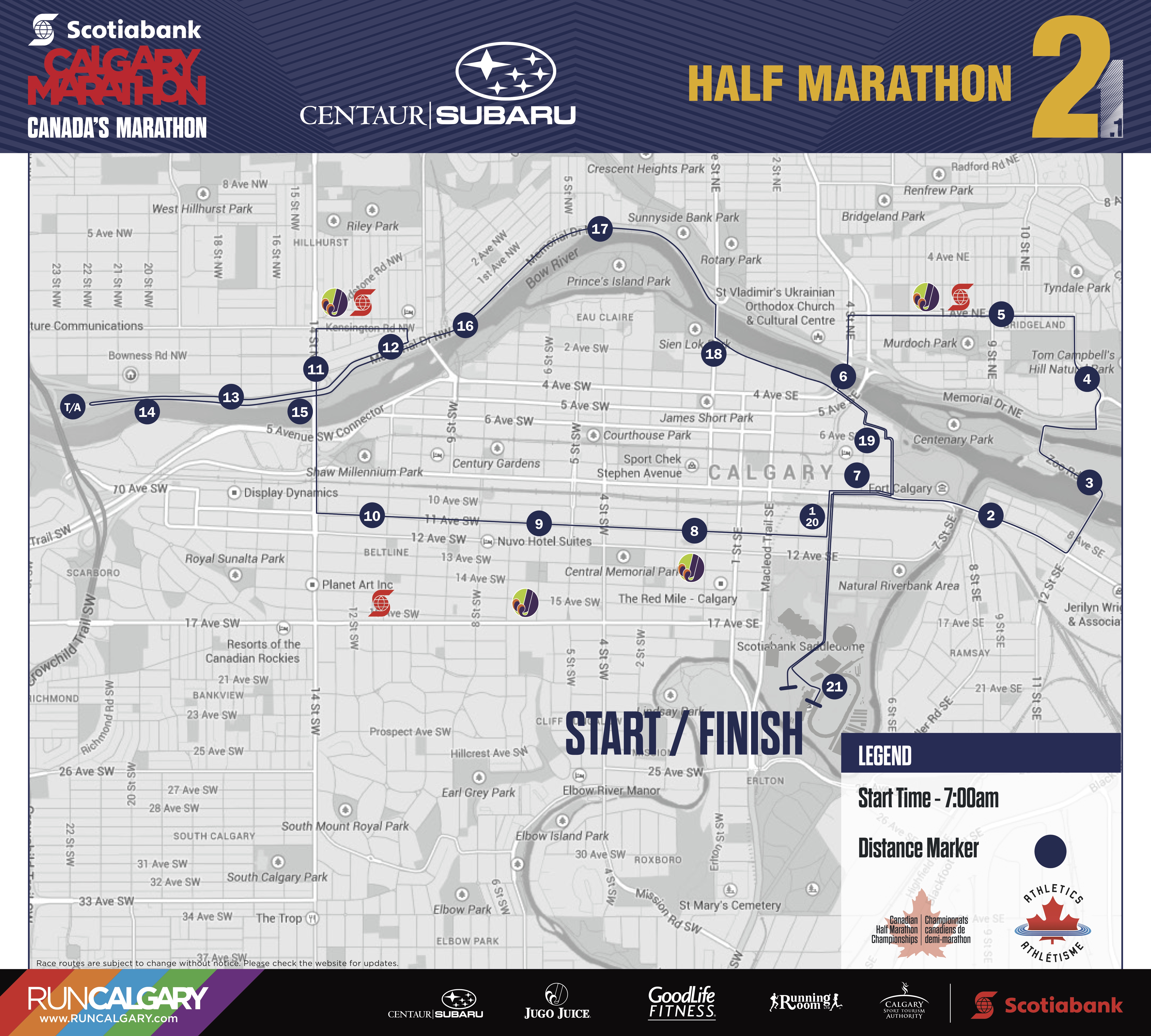 From the gun I felt great — my stride flowed and the pace was effortless despite the rolling, undulating course.  The execution of my race plan was going well.  I could feel Sasha behind me but then eventually I couldn’t.  Going through 5K in 17:01 was right where I wanted to be and put me a little over ten seconds ahead. 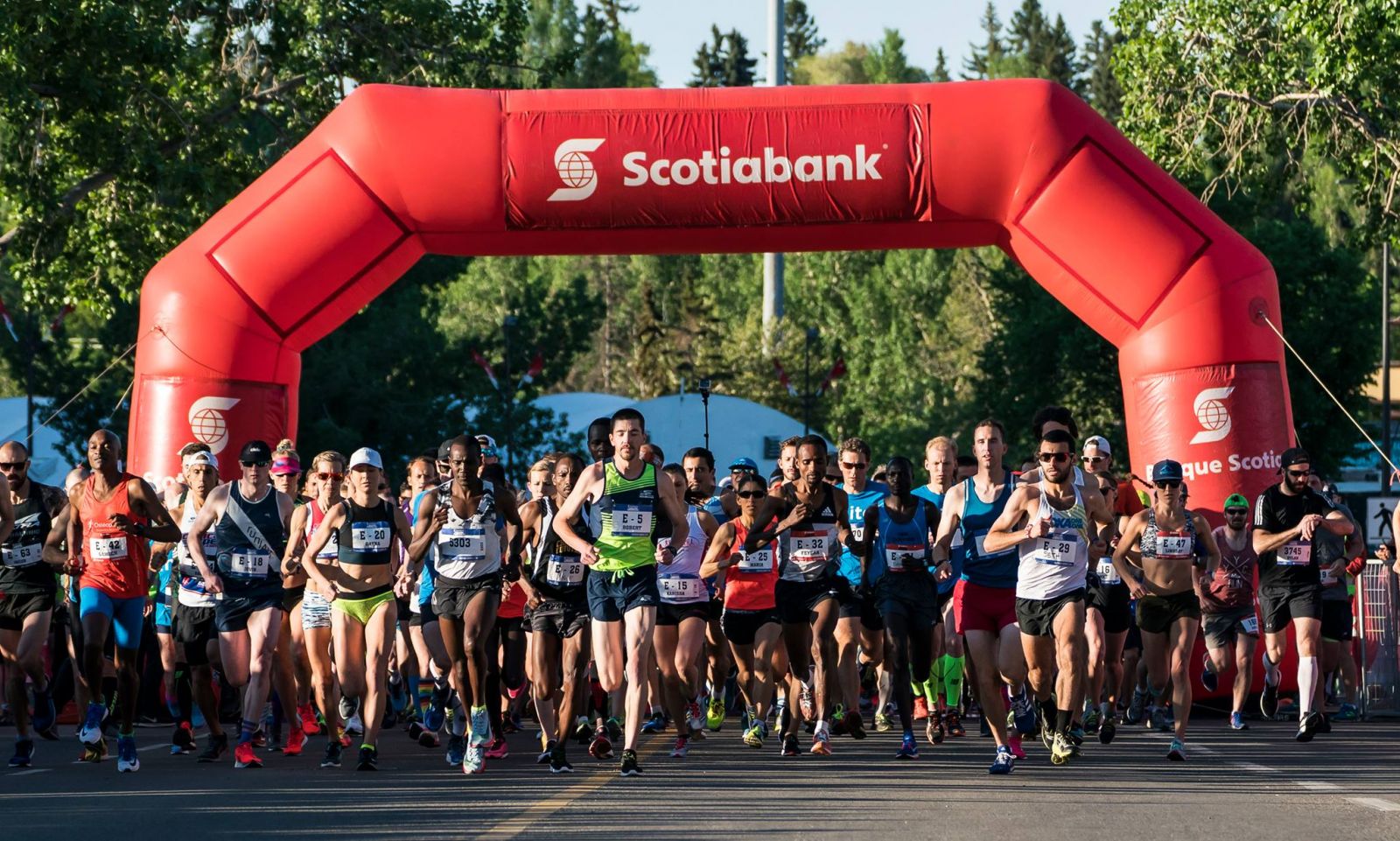 ^ Going for it from the gun. (pc: Dave Holland)

I’m not sure what happened during this section.  The first 5K was easy and flowing and then all of a sudden it wasn’t.  I keep thinking about this over and over in my mind but all I remember is suddenly feeling like my quads were sore as if they were working very hard.  How this happened, it’s impossible to know for sure.  Maybe I was over-striding, perhaps my glutes somehow switched off during the rolling hills.  Whatever the case, I couldn’t figure out how to feel good again.  I tried changing up my stride, yearning for the pep to come back in my step, but nothing seemed to help.  I could feel Sasha inching closer as we approached the 10K mark.  She made the pass, I couldn’t respond.  She was working with a guy and I could not stick onto their small pack.  I immediately fell behind and by the 10K marker I was five seconds back.  The distance only continued to grow.

During this point I tried to focus.  I’m proud of myself for not just folding and jogging it in.  I kept Sasha in my sights and I tried to keep the gap from growing.  Surprisingly I was doing a decent job.  I noticed that she had dropped off the back of the guy she had been running with and was now in a battle alone as well — we were both alone.  As we rounded the hairpin I counted the seconds — I was about just under twenty seconds back.  Still within striking distance.

^ Happy I chose to wear a hat in the Calgary sun! (pc: Sean Nielsen)

This is the part of the race I most regret.  In my mind I knew I would have to make a final push, I could still claw my way back, but I had to go for it.  However, despite knowing this was the “now or never” time to get it done, I couldn’t get myself going.  It was more of a mental block than a physical one.  Of course I was tired and my legs were burning, but I wish I could have at least attempted to dig deep.  Sometimes you never know until you try and I am still kicking myself for not trying.  It would have had to occur before we snaked our way back into the downtown area where our momentum was eaten up as the course turned and we tediously picked our way by groups of walkers who were still in the beginning stages of the half.  And unfortunately, it was during this section that much of my hard work was eaten up and Sasha got back some of the seconds I had earned back in the previous kilometres. 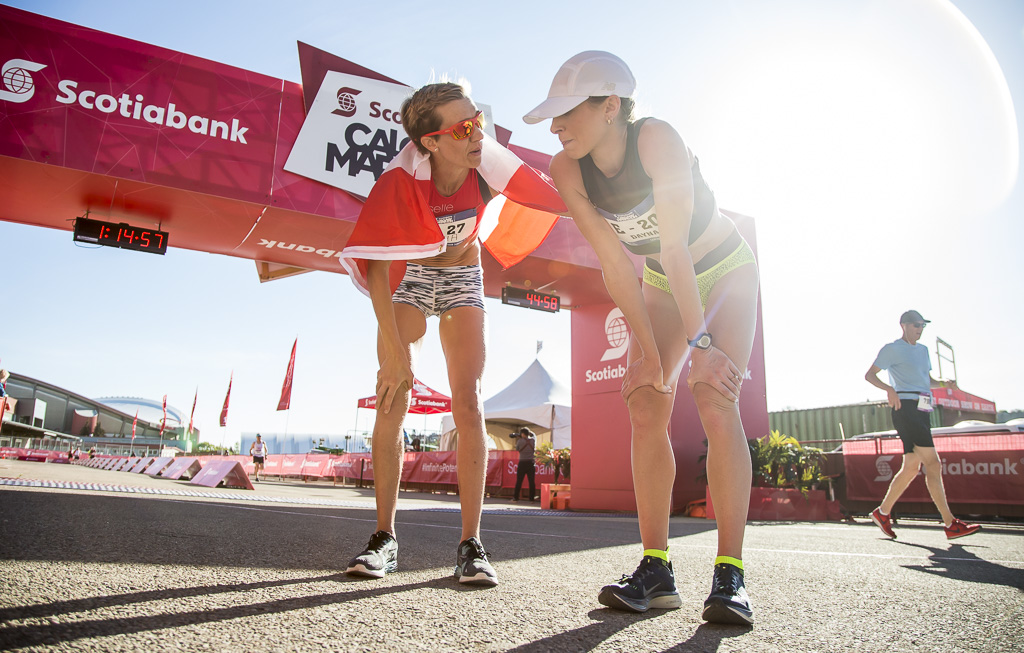 ^ We both fought hard out there! It was a battle. (pc: Dave Holland)

I crossed the line twenty-three seconds back from first place.  A disappointing result, not because I was second, or because the time was slower (everyone’s time was on the slower side it seemed), but because I didn’t leave it all out there.  It’s frustrating to finish a race with regrets.  I may not always be able to control how I feel during a race, whether the legs have it or not, but I do have the opportunity to control if I give it my all.

So, I have two more races to round out my spring season and I hope I can make the most of those opportunities.  Next up is the Toronto Waterfront 10K in a couple of weeks,  another chance for me to try to break the 33 minute barrier.  I’m excited to get back to the 10K distance after racing two half marathons most recently.  It should be fun and I hope this time I can dig deep and go to the well!