So I have a little under five weeks until Around the Bay and I already have two races under my belt.  They went okay, I was happy to get the win in both, but I was hoping to run faster.  Either way they made me realize I have tonnes of work to do (something I already knew but was again reiterated) and I am feeling like the clock is ticking!

First up was the Icebreaker 8K on February 1st.  At the start I went out with a group of guys but within the first kilometre I eased up a bit, expecting them to come back to me.  I quickly realized I should have just latched on because it was windy and I was alone in no man’s land the whole race.  I ended up running 27:31.  My tactical error is something I would rather be reminded of now in a small, early season race than to make that mistake again at a Championship race when it really counts.

Two weeks later I ran The First Half.  It’s a race I have been wanting to do for years and I was happy to finally make it to the start line.  It was a bit daunting to race a half marathon so early into my spring but it provided a good gauge to see where I am at.  I went out hard from the gun, perhaps a bit (a lot) too hard.  My early ambitious start began to take a toll during the second half of the race but thankfully I had enough of a lead ahead of second place to be able to just hold that position.  I finished in 1:16:10 with another lesson learned.  I was hoping to run around 1:14 but I think my fast pace out of gate fried my legs for the second half.  Either way, a win is a win and it felt great to start off my spring with a BC Championship.

Around the Bay will be here before I know it and I just tackled my first 30K (since the spring of 2013) this past Sunday.  I was glad to get it done and even happier that it was my fastest 30K training run ever, despite feeling like my legs were made of lead.  I ran the first 15K with Josh and then he got on the bike and rode with me as I ratcheted down the pace for the next 15K.  It was a great morning session and I ended the day with an easy hour on the trainer followed by a strength circuit.  I’ve kept 2-3 hours of biking throughout the week to help flush out the legs after hard sessions, aid in glute activation, and add a bit more to my weekly totals.

Another highlight of the month was having my sister Kim come in from Edmonton and be on the sidelines for the First Half.  It’s always good to have her and we enjoyed touring around and eating some yummy food during her stay.  We indulged in the famous Grounds for Coffee cinnamon rolls, had our usual sushi outing, made some delicious summer rolls for dinner, and constructed a rather delectable lox cream cheese bagel with capers and pickled red onions.  One of my favourite discoveries during her visit was Mamalee Malaysian Delight on West Broadway.  They have a chicken laksa to die for!  If you love chicken skin, a little cartilage, and noodles in a warm and rich curry and coconut broth then this soup is for you.  If you do not, then we can’t be friends.

As an end note I have to say that I am so thankful to feel healthy again.  It’s something that really resonated with me on my Saturday evening run.  I had felt really tired that morning while running with Josh on the beaches and I was dreading going out alone before dinner.  It was dark and quiet and as I was running it just felt utterly peaceful. I wondered why and then realized the major contributor was my pain-free body.  Nothing hurt.  There was no cacophony of torment shooting throughout, nothing to distract me from the silent environment I was running through.  That’s when I realized that despite my tired, heavy legs, which eventually would feel fresh and spry again, I was healthy and that was something to rejoice! 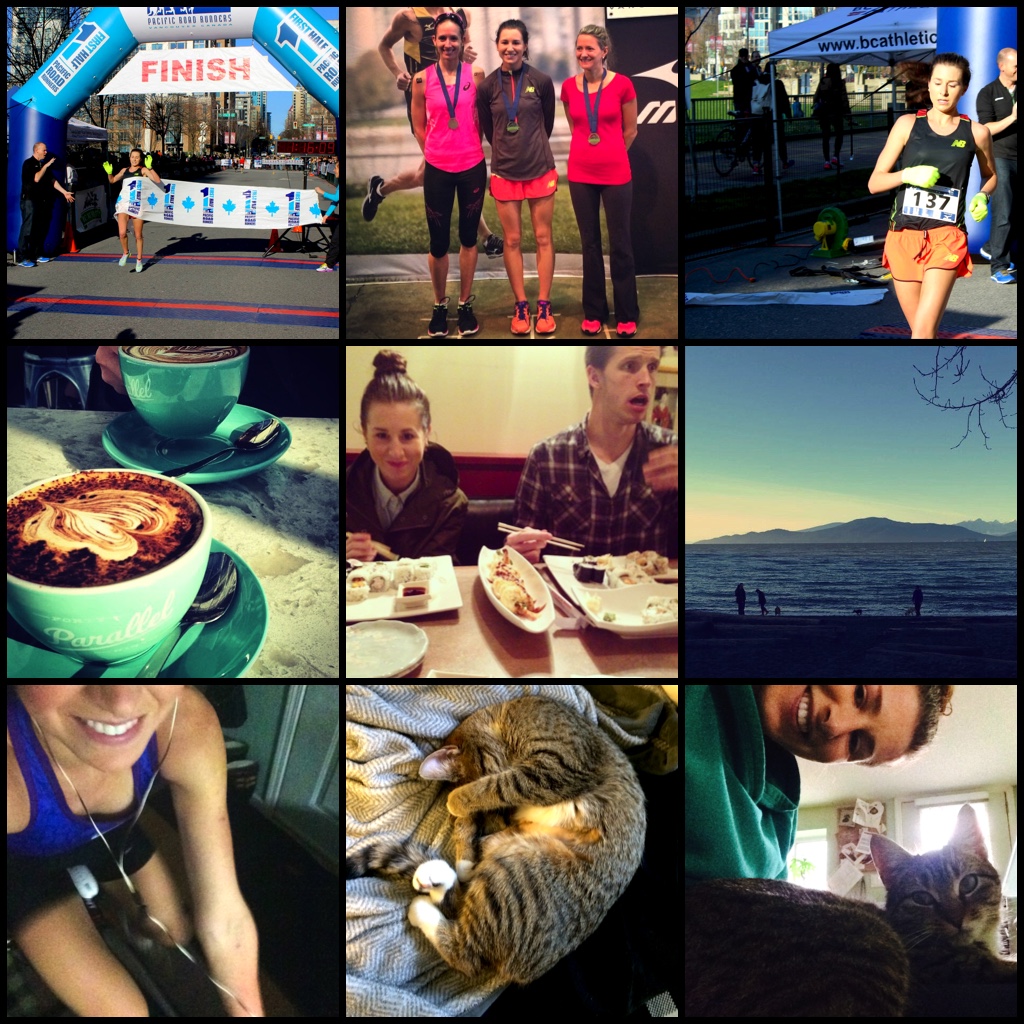 ^ First Half: photo credits to Frank Stebner & my sis

^^ Venezuelan Coffees are my absolute fave! Still not sure how Kelly Wiebe got this shot (it's a keeper!) And gorgeous views of Spanish Banks :)

^^^ Getting work done on the bike.  Look at this little squirrel!  Elle and I taking a selfie.