It feels good to be done my first target race of the spring, Around the Bay 30K.  Here is a brief recap of my last three spring road races that spanned the last three weeks.

First up was the BMO St. Patrick’s Day 5K.  St. Pat’s is an event that I had wanted to race last year so it was fantastic to finally be there to toe the line.  I was nervous.  I find that 5K races hurt like hell!  At the same time I was excited to see where I was at “speed-wise.”  I figured I would be happy to be around 16:30-16:45 since most of my workouts have been geared towards targeting half-marathon pace and because the course is sufficiently challenging with several hills.  From the gun I went out in 2nd place behind Rachel Cliff who I knew was going to be hard to beat in a 5K.  She went through the first mile 13s faster than me!!!  I kept looking ahead and trying to attack the hills.  It was over before I knew it, finishing in 16:36 (2nd place behind Rachel) and pleased with my effort and how strong I felt throughout the race.  Afterwards I headed down to Beaver Lake and completed a workout of 5x1K before cooling down.  Perfect to be able to make races a part of a bigger workout!

Next up was Canada Running Series’ Modo Spring Run-Off 8K.  I was debating whether to do this race because I wanted to feel good for Around the Bay but we decided it would be another good workout and opportune time to work on my mental game.  My goal for the race was to be more aggressive at the start and to try not to lose it all in the first kilometre.  From the line I pushed out harder than the 5K and was running with Lanni and Rachel for the first kilometre.  I lost about 2 seconds in the next but continued to run strong, keeping my head up and eyes on them.  I knew my speed was lacking since my first goal race was the 30K so it was all about keeping my legs moving and staying alert in case someone up front faltered.  In the end Lanni took the win, followed by Rachel, and I was able to grab 3rd in an 8K personal best time of 27:13.  Immediately following the race I headed down to Beaver Lake to get in a solid workout of 3K + 2K + 1K — made especially fun with the company of Lanni!  Following the awards I finished up my cool down with Catherine before heading home — a big day in the books and a successful one at that.  (Check out Cathy’s new blog HERE - she is basically my hero!)

^ Natasha, Me, Catherine, and Rachel after Modo 8K. ^ Rolling on the seawall during Modo 8K.

So those two races helped me prepare for Around the Bay both mentally and physically as they were big workouts in my legs.  Not all races serve the same purpose.  Perhaps I am “racing” a lot — it’s something that people often chastise but I believe that if I am are not tapering for a race and using it essentially as a workout then it can be a huge benefit to my training week.  Adding in those post-race workouts allows me to take a day or two easier in the following days and that extra recovery allows the workout to sink in, resulting in big gains.  Racing for me at this point is also about trying to get back my race mentality.  It’s something that I have been struggling to find again after being out of the mix the last couple years and I find that only racing will help me to relearn how to push through the pain.  So that’s my little spiel on “racing too much” . . .

Around the Bay 30K in Hamilton, Ontario is a race that I love and fear; it’s both fun and tortuous on the mind and the body.  I went into the race knowing that I was fit and in a position to shoot for the win.  I knew that I wasn’t going to go after the record (not quite there yet!) so my one and only goal was to be at the top and hopefully feel good doing it.  It’s a tough course and with the cold and windy conditions on race day I knew that times wouldn’t be very quick so maybe I would walk away with a pb, but maybe not.  Right from the start I knew the pace was a bit quick but I felt relaxed so I just went with it, knowing that it would slow down as the hills came.  I went through 5K in 17:10 and 10K in 34:57 — still a bit fast but I knew I could muscle through it.  Then my stomach started bothering me and I knew I would have to make a pit stop eventually.  I kept my eyes peeled and my pace slowed for the next 4K as I tried to keep my stomach discomfort under control.  I finally made a bathroom stop at around 14K and felt much better over the next 5K or so.  I did, however, not want to take any more gels and was feeling less than awesome, worried that I was going to have more issues down the road.  I managed to go through 20K in 1:11:41 and the half marathon in 1:15:30 which I am happy about considering the hills and stomach issues.  The rest of the race was just a grind as I tried to keep a steady pace over the relentless rolling hills.  In my opinion the hardest and most demoralizing segment was the final 5-7K as the terrain flattened out, greeting us with a gusting headwind during a part of course where you can usually roll to the finish.  Furthermore, I stopped one more time to use the bathroom at an aid station around 24K (I think I was just really paranoid at this point and wanted to be on the safe side!)  Nonetheless, it was all worth it to run into the stadium and break the tape knowing that I had accomplished what I set out to do.  Funny enough, looking at my past ATB stats I realized that if I am anything at this race, it is consistent: in 2011 I was 1st in 1:50:46, in 2012 I was 2nd in 1:50:48 and this year I was 1st in 1:50:47 — a bit ridiculous!

To wrap this up, it is good to be home and recovering well from the 30K.  We had a relaxing week in Windsor with family and it was fun to have my mum travel up to Hamilton with us to watch the race.  In the end I am feeling relieved to have my longest race of the spring done.  Easy runs on Monday and Tuesday rid my quads of all the soreness they were experiencing post-race and I am excited to get back to workouts as I gear up to Sun Run 10K in two and a half weeks and TC 10K the following week.  Can’t wait to see how those unfold!!! 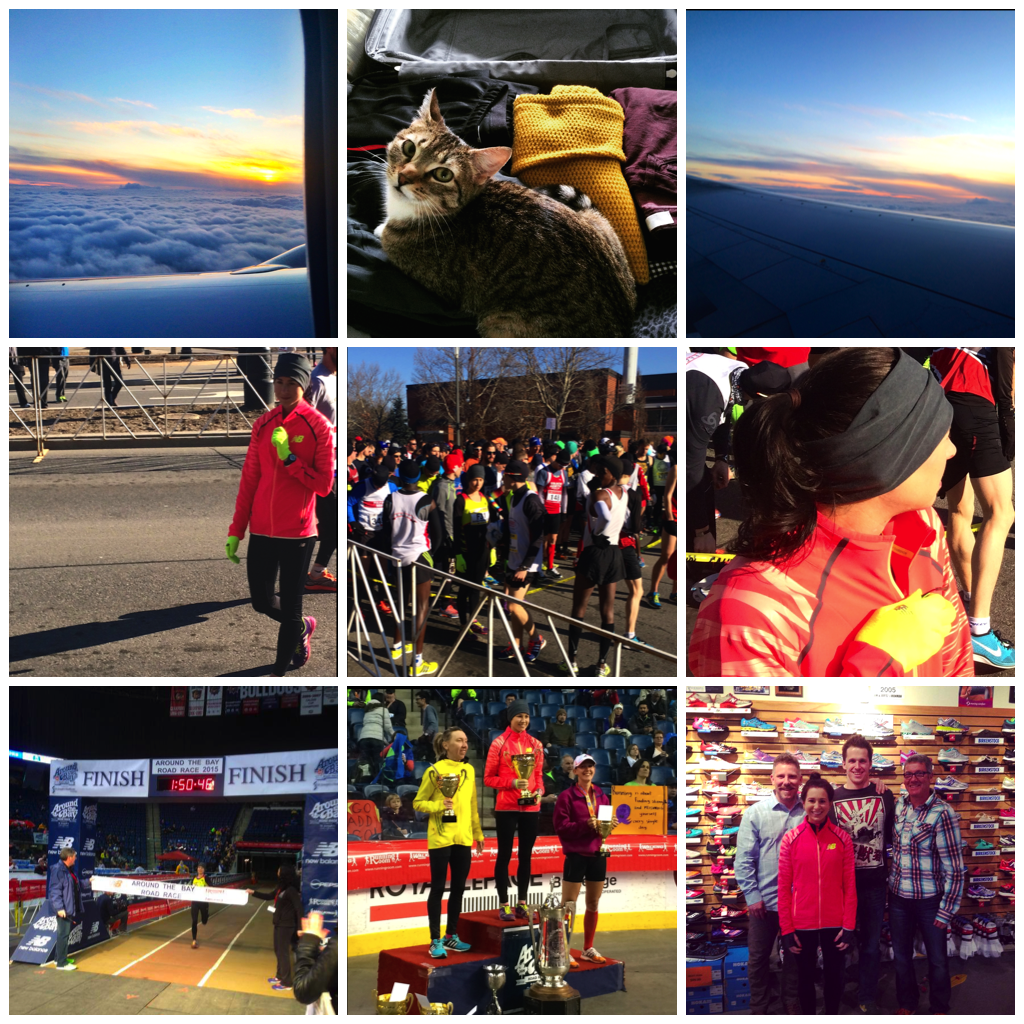 ^^^ Flying out of Vancouver towards Windsor.  Elle wanted to come too!

^^ Pre-race preparations in the corral. Nervous as I know the pain that is to come.

^ Finishing up in the stadium and then back on top of the podium.  Later we enjoyed visiting our friends at the Running Factory.