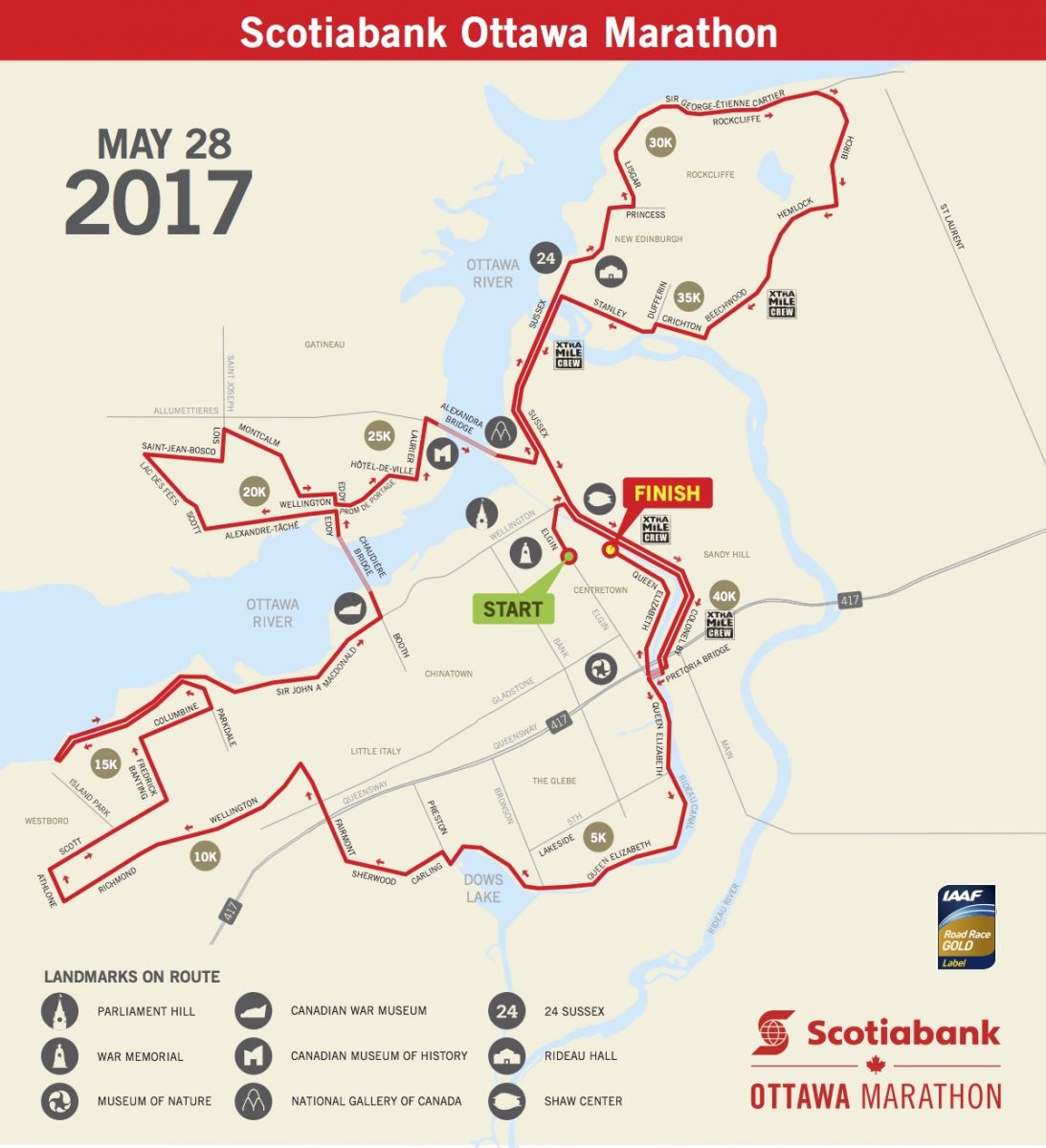 Here's how the race played out:

After the usual jostling at the gun I settled in behind my pacer.  We had agreed on 2:32 pace and were aiming to go through half in 1:15:30 -1:16:00.  A large group quickly formed around us — a lot of men and one Polish woman who I knew was targeting the 2:28 territory.  I felt we were going a bit quick but the group was large and I wasn’t certain of the pace because I missed spotting the first couple kilometre markers.  When I saw the 5K split I thought “Josh is going to be mad — I said I wasn’t going to do this! Oops.”

The pace chilled down a bit.  The Polish contingent forged ahead quickly in a large mass and I stayed with my pacer.  Unfortunately, he turned to me around the 9K marker and said “I have a problem.  My calf . . . “  Not an ideal problem to have in the early stages of a marathon when I had hoped he could take me through at least 35K but that’s life!  I just looked at him and said “Do what you have to do.”  And then I was left with only two other men around me, which quickly whittled down to just me.  I was soon all alone with my thoughts on the starting-to-sizzle pavement.

This is when I noticed the heat — the sun especially.  I really wished I had worn a visor or hat to shield my face because it was intense.  I was prepared to race this on my own and not use my loss of a pacer as an excuse for a poor performance.  I knew I was strong enough!

I arrived at the first sponge station at 16K.  I grabbed a couple to get the cooling benefits and stuffed one in the back of my race top.  I passed Josh at around 18K.  He said the pace was good and I replied with “It’s hot!”  Then he mentioned that the women’s lead pack had blown up and they were scattered everywhere.  That didn’t help me much because I felt like I was barely holding it together myself.  I knew my pace was still good, as I split through half in 1:16:01.  On the slower end of our target but I knew that at the very least I could still manage to be under 2:37.

Apparently I exploded at some point around here.  Perhaps it was the hills and heat working against me.  That being said, in this section I passed 6 casualties of the race, including one Kenyan woman.

Another sponge station at 25K.  One sponge out, another sponge in — just trying to keep the core temperature down.  Still struggling.  I certainly need to mentally work on pushing through the 20-30K chunk.  I continued to rise in the ranks though, as more succumbed to the heat.

I hit 30K in 1:50:13.  That was about 13 seconds slower than the slow end of the range I had written on my hand but I knew it was still quick enough to try to stay under 2:37 if I worked hard.  I could not dilly-dally though or I would miss it.  Mentally it was much easier to know I was nearing 35K.  At that point I knew I could dig deep and just run to the finish.  I continued to pass other runners, another motivating factor.

Relieved to be within the final 7K of this race.  To me, the end was already in sight.  My legs still felt quite good — at around 38K, however, the heaviness slowly started to set in.  Nothing too debilitating but the spring in my step began to disappear.  My head was also starting to tingle — a symptom of the heat.  The last sponge station was at 36K and I took full advantage of it.  The crowds were thicker in this portion and I was so thankful for this!  As I approached the 40K marker I saw Natasha, Catherine, and Rachel there cheering loudly and a glance at the clock told me I had enough time but it could be close.

The last 2.2K flew by.  I fought hard to keep my legs moving and the grimace on my face was certainly permanent for those final few kilometres.  I knew that if I let up I could miss the time by mere seconds so I ensured I worked hard to the finish.  The crowds certainly lifted me during this point of the race and it was my fastest segment of the second half.  I broke the tape and was handed the Canadian flag.  Josh walked over and said “You did it!” 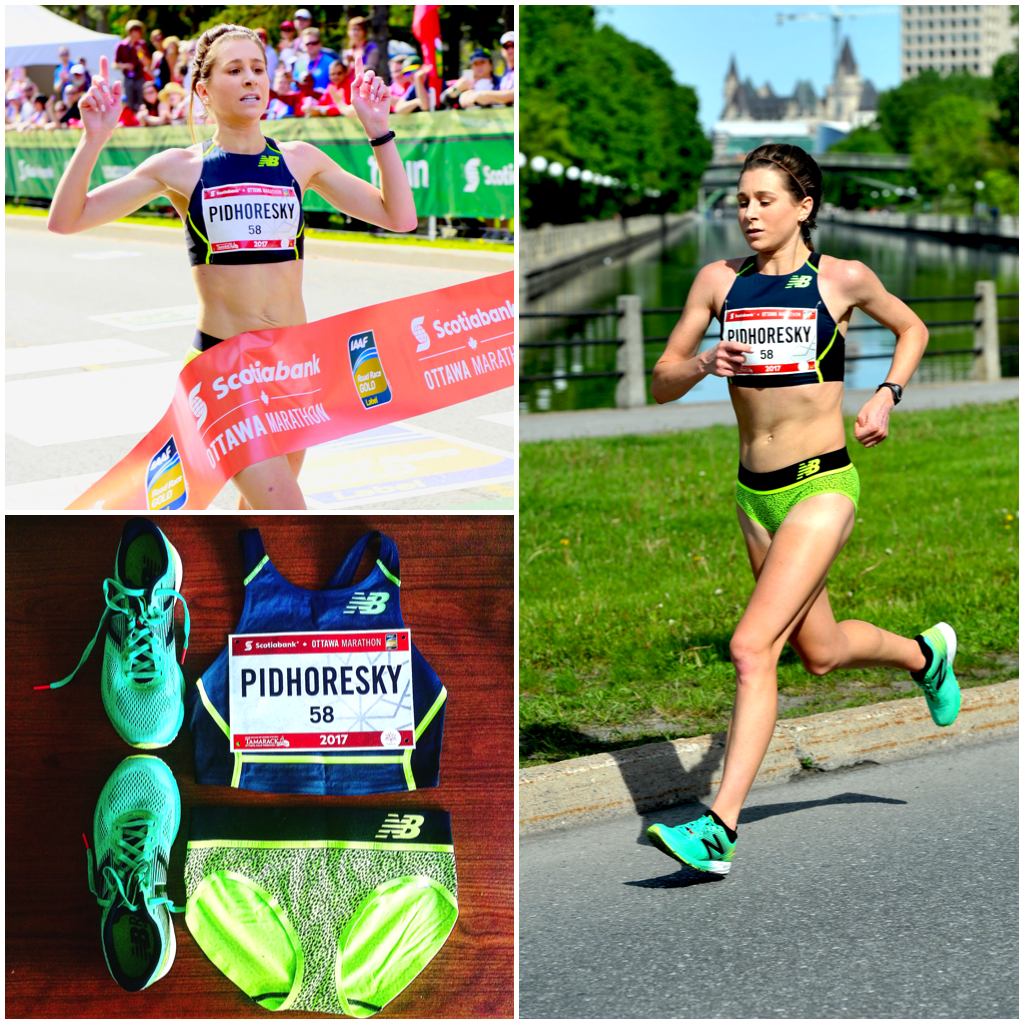 ^ Really need to work on my finish-line smile!

^^ I haven't spent much time in Ottawa but it sure was prettier than I anticipated. I experienced such a wonderful tour of the city.

Of course I would have loved to have run faster but I accomplished my number one goal: to achieve a qualifying mark for the World Championships in London this August that would rank me in contention of a spot.  This past Monday Athletics Canada officially announced my selection to the team along with Rachel Hannah and Tarah Korir.  I am delighted to have earned this place on Team Canada and I am looking forward to racing smart and placing as high as I possibly can in this very deep field.  I know that this will be an incredible learning experience and for that I am very thankful.

In other good news, I am pleased to say that my body has held up quite well post-race.  The slight muscle soreness I did experience had disappeared within 48 hours.  After four days off I began running again, starting with some short 6K runs on Friday and Saturday and building to 12K on Sunday and Monday. Since everything is feeling adequate (thanks especially to Kimen at Petersen Wellness Clinic for my two massages last week) our training can commence. I'll keep you updated as we stride toward London 2017! 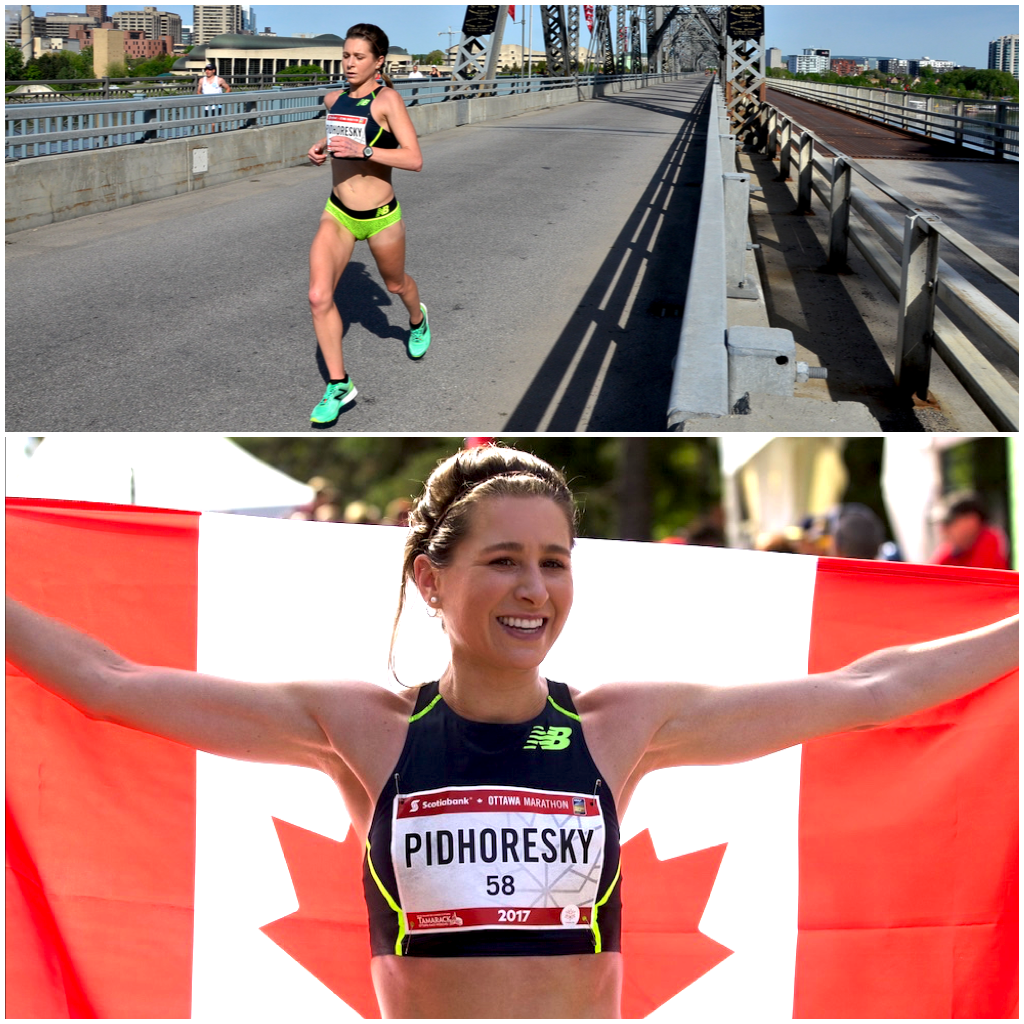 ^ Running back into Ottawa from Gatineau -- lovely to briefly tour the province of Quebec.

^^ Relieved to finish and hold the flag. Satisfied but still hungry for more. (p.c.: Matt Stetson)