It’s been almost exactly a year since I ran my last marathon.  Perhaps that is what caused me to forget the slog and fatigue that comes with logging bigger miles.  Coming into this fall marathon build I mistakenly thought it would be a piece of cake and that my fitness that I displayed over the spring would transfer easily into the marathon training.  Pro tip: NEVER expect anything to be easy.

So here we are: eight weeks out from the Chicago Marathon.  And after several weeks of fatigue and struggling through workouts, I am finally feeling like my body has adjusted to the increased mileage.  It’s very likely my tiredness was exasperated by the heat and humidity as well as the increased volume and larger workouts, and perhaps even by the chest cold I had back in mid-July.  During these weeks I of course questioned what was happening but was continually reminded that sometimes it just takes longer for your body to adjust.  I was healthy, my blood work was all clear, and I just had to keep showing up and work hard to recover in between sessions whilst constantly reminding myself not to fret!

During this early build phase I also raced a 10K in Edmonton on July 22.  When I first registered for the race Josh reminded me that I would probably not be at the same fitness.  I had a couple weeks of workouts in the bank but the volume had increased drastically — so by the time the race approached my tired legs were beginning to think that racing was a bad idea.  That said, my workouts showed I was fit so I was only hopeful I could put out a good result. 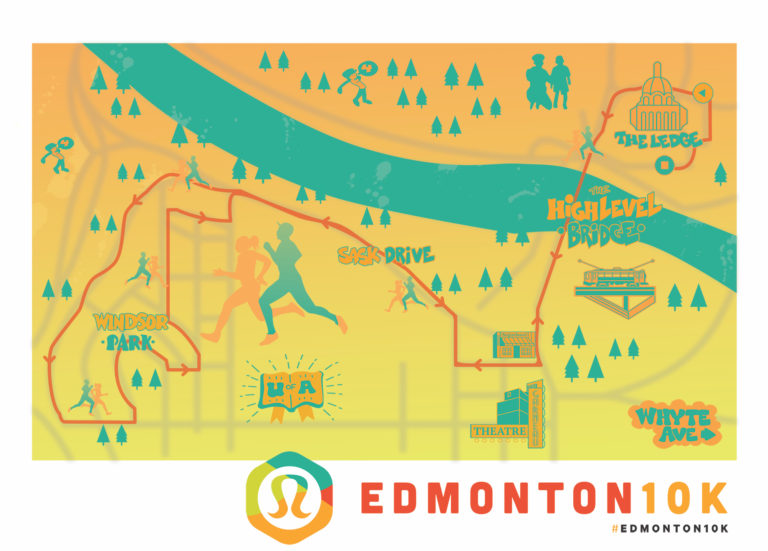 Race morning the wind was gusting at 30k/h but the temperature was perfect.  When the gun went off I stayed conservative, not wanting things to go out too spicy.  The course was quite undulating in the first half and our times showed.  Sasha had settled in behind me and Leslie was a bit off to the side but only a few paces back.  I was actually surprised by how slowly we were going.  My legs felt like they were moving through jello.  At around the 4K mark Sasha and Leslie took off in front of me and, though I tried to respond, my legs would not do me any favours.

It was disappointing to be so out of contention in the race so early on.  My heavy legs felt every single increase of elevation on the course.  My goal of contending for the win quickly shifted to maintaining my third place position and staying under the time that was set to get the full prize money (35:20).  I was in a state, to say the least.

I was through 5K in 17:36 — about 10s back from Leslie and Sasha and about a minute slower than the last time I ran a 10K!  That said, this course was certainly slower, and the conditions proved challenging for many.  During the second half of the race I just tried to keep looking ahead, I focussed on keeping the legs moving, and I even had some company for much of it with a fellow male runner.  I closed the second half in 17:28 to finish in 35:04 with 3rd woman overall. 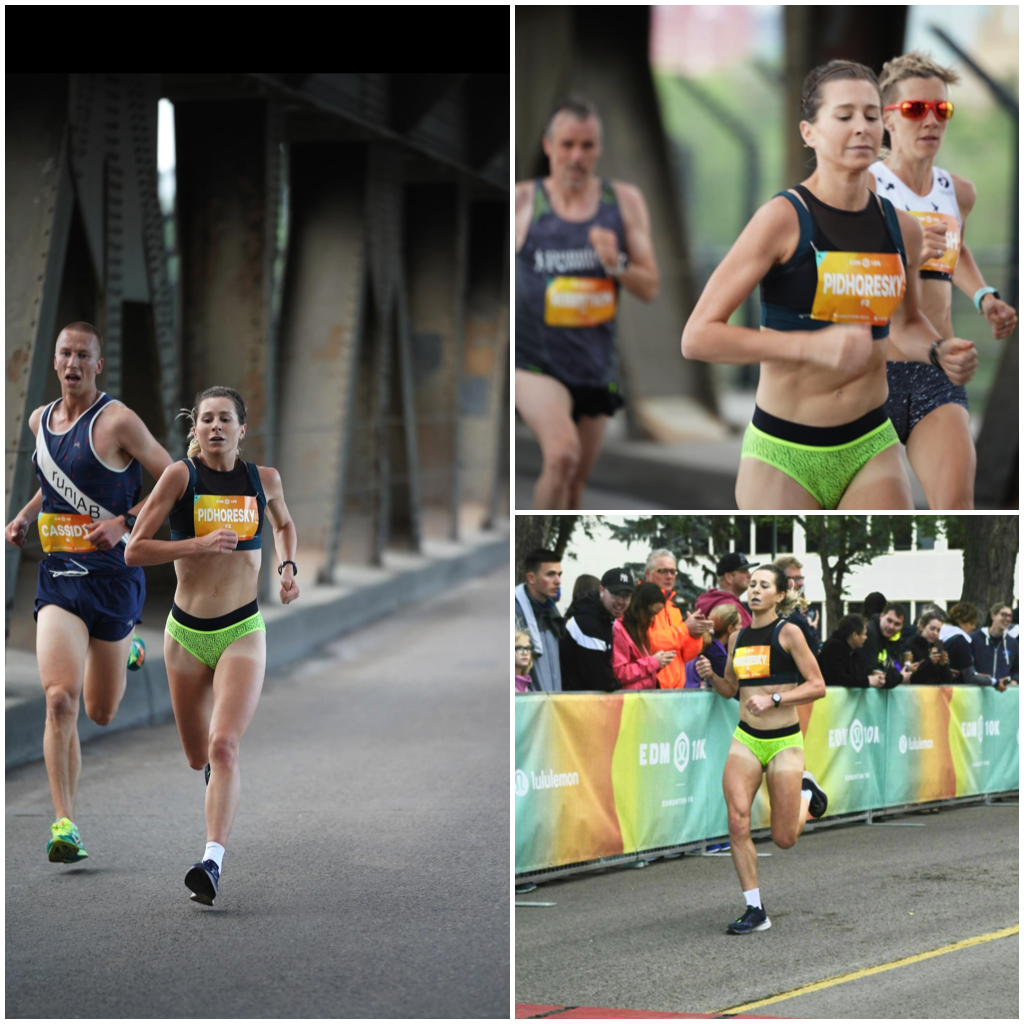 ^ Sasha and I crossing High Level Bridge around 1K into the race.

^^ Just coming across the finish line and keeping my head up:)

^^^ Working hard in the last kilometre as I come back over High Level Bridge with a fellow runner.

Maybe racing was a bad idea since we knew it just didn’t make sense to add in a taper so early in my buildup back.  It’s not particularly fun to race when your legs feel like cement and you significantly underperform.  Nonetheless, it happened and I’d like to think of it as more of a “marathon-pace” workout (haha!) and a good opportunity to practice mental toughness.  It was a chance to keep going when everything in your body is telling you to stop and walk it in. 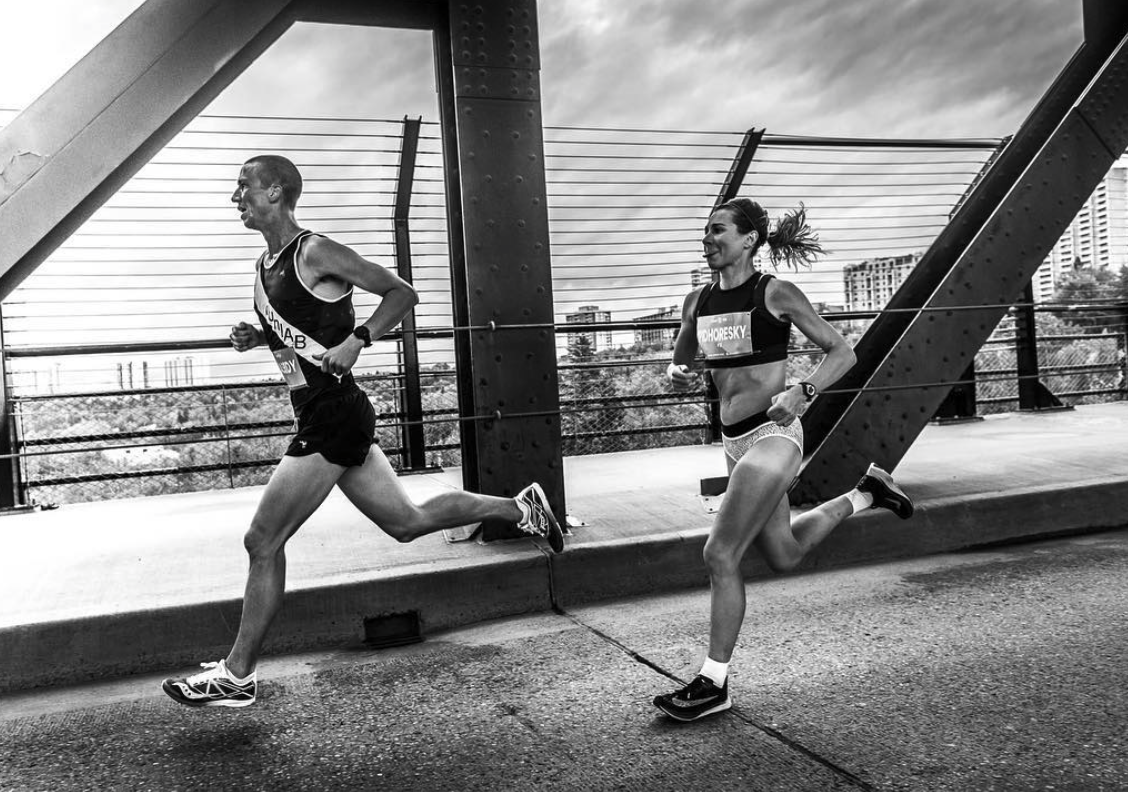 Fast forward to now and we’re several weeks post-race and I am gearing up for the Edmonton Half Marathon.  It’s a good time in the build to have a slight taper going into this half before we really hunker down for 7 more weeks of heavy marathon training.  I’m looking forward to heading back to Edmonton and getting in a good hard effort.  It’s hard to know what to expect from my body at the moment but that’s marathon training for yah!  I’ll let you know how it pans out.