Going into Around the Bay 30K is always a bit nerve-wracking for me.  It’s a challenging early season race, the weather is always uncertain at that time of year, and it’s tough to know what kind of competition will be toeing the line.  That said, I somehow keep coming back and this year I was looking to nab my 4th win (in 2012 I was 2nd to Krista DuChene, to summarize my ATB history).

This year the nerves were still there, as they always are, but I felt less of a need to race super hard.  I knew Krista was aiming to run a more moderate effort, with Boston being on the horizon, so I think that caused me to approach the race in a calmer manner.  Still, with it being the longest race of my spring season, I was going to give it the respect it deserved.

Race morning was chilly.  With windchill, the thermometer read -11C — not what I am use to running in and I certainly felt a bit more laboured in the breathing department.  The wind was strong but not as gusty as the previous year.  It’s spring in Ontario — it is never NOT windy. 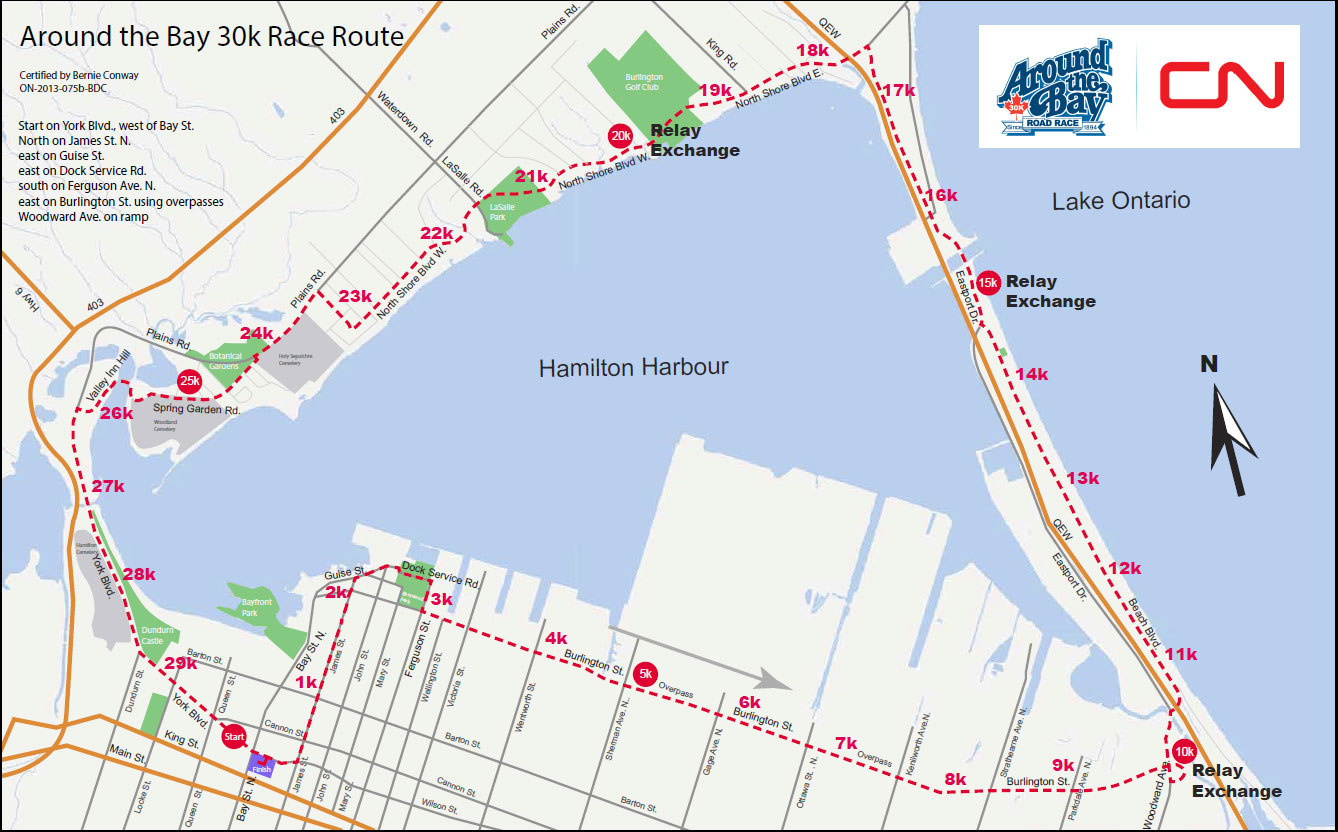 From the gun I settled in fairly quickly.  We raced out of the downtown core and into a straight section into the wind (as per usual).  I was a bit slower through 5K than I expected and quickly realized it was probably not going to be a day for a personal best.

We continued to run into the wind as well as up several rollers and overpasses.  At this point I was very much wishing I had held onto a group of guys for this section.  Thankfully around 9K Andrew Yorke came by and motioned to tuck in behind him.  What a help that was! He dragged me out of the windy section as we turned to cross Lake Ontario and Hamilton Harbour.

Not much to report during this section in the race.  I took my gel at about the 40min mark which was an accomplishment!  I wasn’t sure if Krista was in sight when I peeked behind at the 10K mark as we corkscrewed up the ramp.  It was hard to see and I knew she had been training on the hills a lot so I knew it was important to stay focused and keep working hard.  Basically, I continued to run scared.

I appreciated the rollers that began at the 18K mark.  I certainly prefer the smaller ones, but it was a nice change and it helped to wake the legs up.  Additionally, the scenery from 18-26K is quite lovely even though it is probably the slowest part of the course.  It almost makes up for the challenging hills! 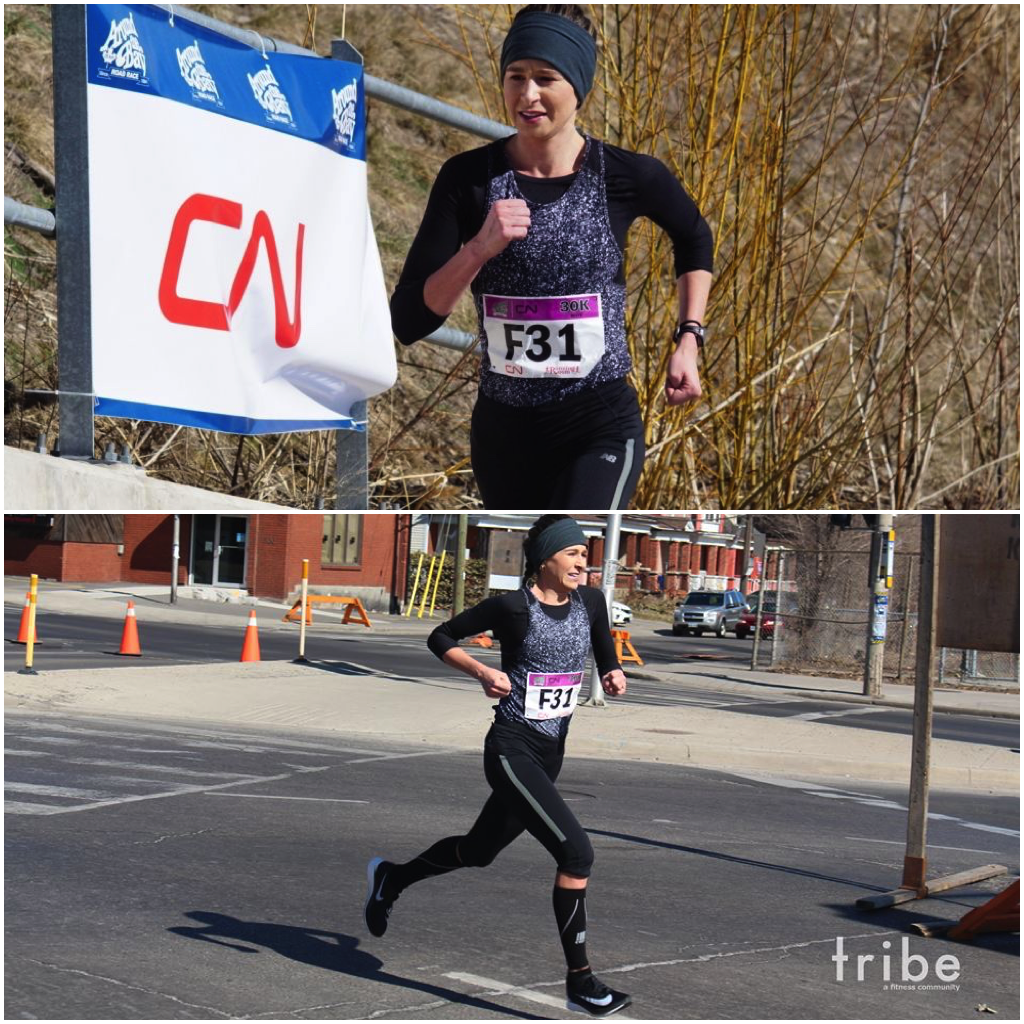 ^^ Enjoying one of the flatter, windier stretches of road (pc: Tribe Fitness).

I took my second gel at 1h20 — honestly that’s a miracle.  I am so pleased that I have finally been able to figure out how to get nutrition in without wanting to vomit or run to a port-a-potty.  Course-wise, the hills were beginning to burn a bit in some sections but I knew I just had to get to 26k.

Up the final big hill — it seemed longer than usual this year!  But so nice to know that the rest of the way is mostly flat to the finish.  My legs were feeling fatigued in that last 4K as I fought the wind right to the end. At this point I knew that I had a large enough gap on Krista and just had to make it to the line.

Breaking the tape at ATB always brings a flood of emotions with it.  It’s a challenge, it doesn’t feel easy — it feels hard!  I suppose it should feel hard and I will probably always have moments of doubt and despair within races.  I think the challenge also came from my long hiatus after the marathon at Worlds in August.  It was a long time to not race and I am still getting that grit back. 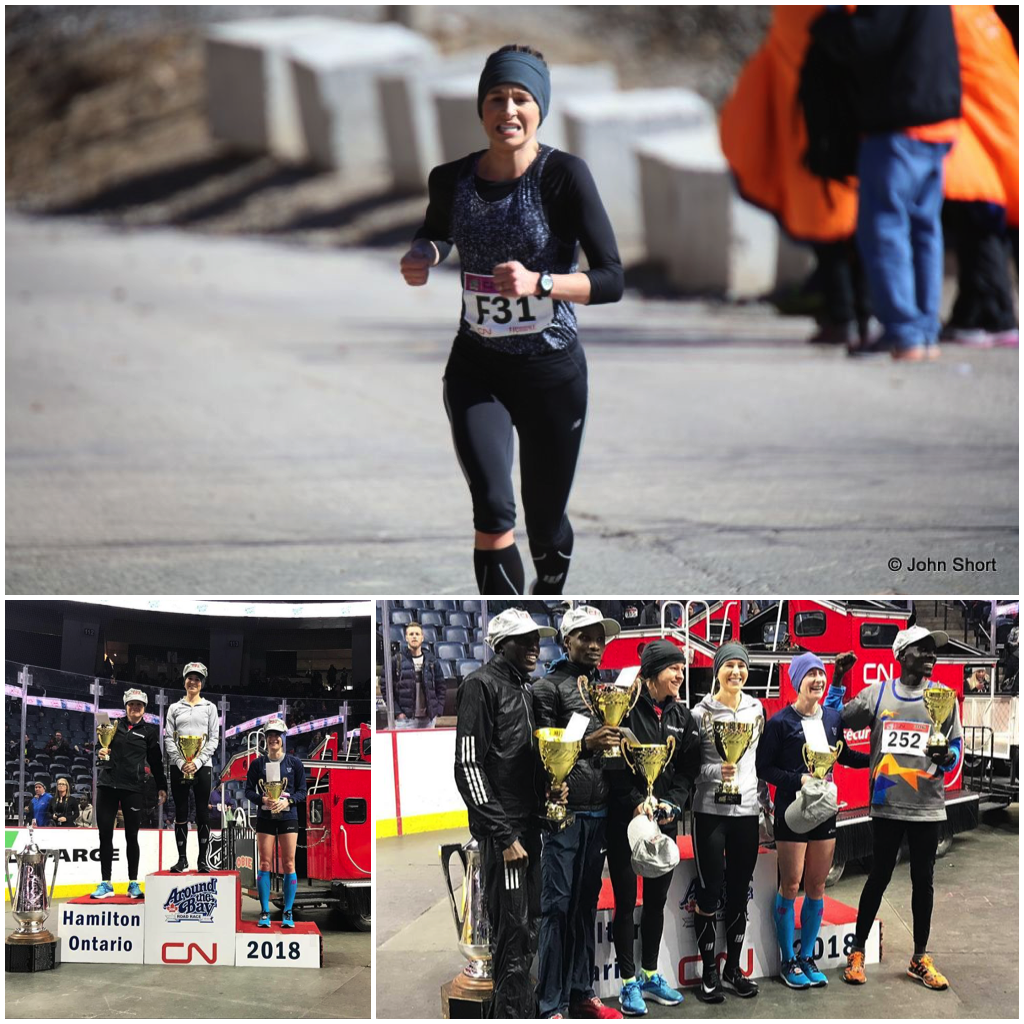 ^ Gritting the teeth as I climb the final hill at 26K (pc: John Short).

^^ Sharing the podium with Krista DuChene who was 2nd and Kait Toohey who placed 3rd.  Krista is gearing up for Boston in a few weeks! (pc: @bayracerun)

All in all I did what I set out to do.  This race isn’t about time — a bit chilly to try to run a pb I think.  It’s tough to say if I could have pushed myself more, I think my mind just wanted to keep things comfortable so I am torn as to whether I was just mentally weak or if the weather made it more difficult to dig deep.  Hard to say.  At the very least I am thrilled I was able to take my gels and feel good doing that.  Such a simple concept and task has not proven easy for me over the years.  Progress is being made!

A huge regret and issue I hope to address in future races is how many times I looked behind me.  Especially from 15-26K!  It was incessant and I was annoying myself.  Of course the best way to fix this is to run looking ahead instead of saying “don’t look behind.”  So the next few races I hope to run with confidence, focus on myself, and look ahead. 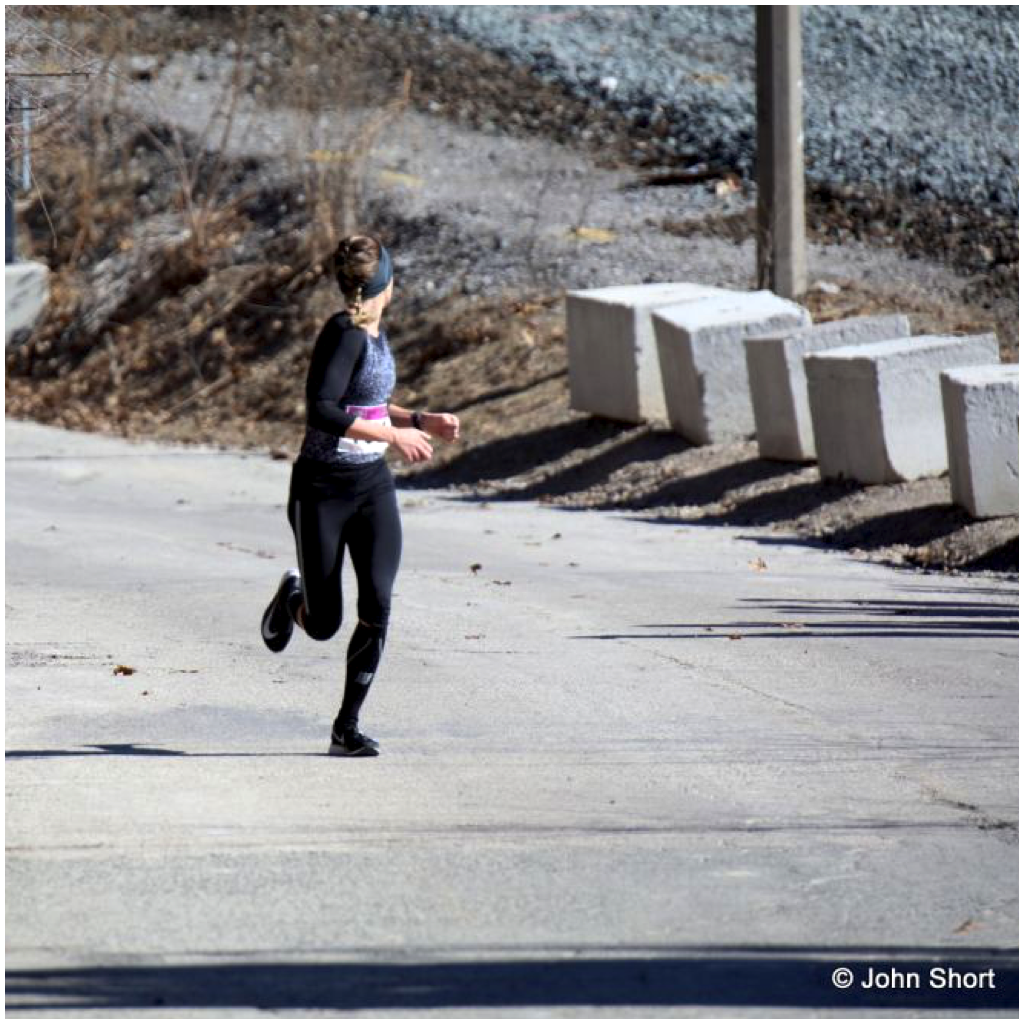 ^ Cringing just looking at this photo.  Ugh, guess what Dayna -- you look ridiculous and every time you look behind you are slowing down (pc: John Short).

Recovery since the race has gone well and we’re now focusing on more speed-based workouts.  The mileage is going down to a more moderate level and the sharpening has begun as we head into a couple of 10Ks in the coming weeks.  Hoping for some shiny new pbs — I’ll keep you posted!