As my last race before I toe the line at the Scotiabank Ottawa Marathon I chose to keep things local and lace up for the BMO Vancouver Half Marathon.  We chose to do this race in the midst of heavy training and just a few days after a 35K long run workout that included: 15K at marathon pace, 2K jog, and 6x1K faster than marathon pace off 1K jog.  That workout went really well but I hoped I could recover fast enough to be able to give the course record at BMO a shot.  Whatever the case, my task was simple: run strong and as fast as you can.

I had a slightly extended warmup of 6K before the race to get in a few more kilometres for the day.  Josh also ran the half so it was nice to have company as we jogged around in the early morning hours.  The sun was shielded from the clouds and I was thankful for the extra coolness that would create. 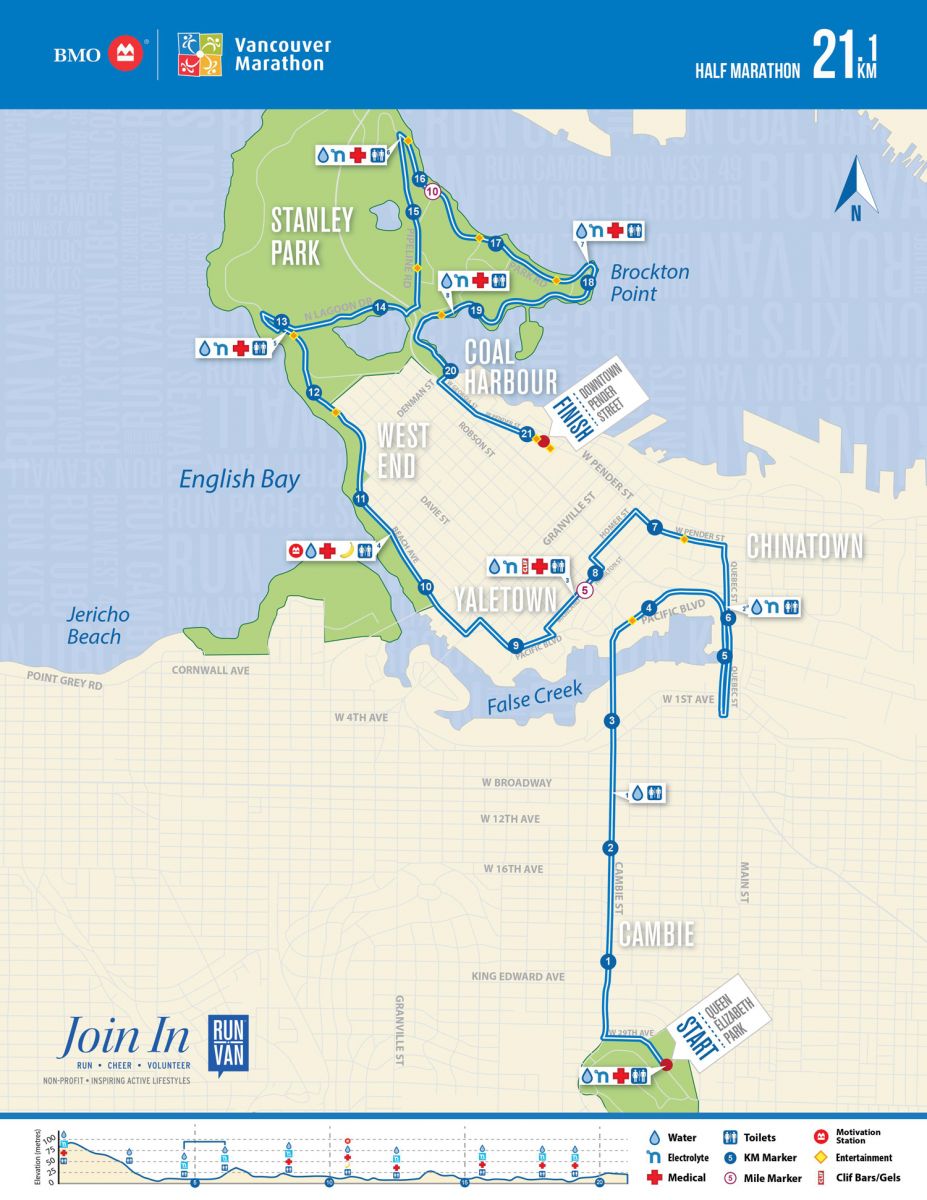 Off the line I really eased into the race.  I relaxed on the long 3K of downhill and took note of my surroundings and the competitors around me.  For a brief moment I thought “maybe I am not nervous enough for this . . .” since I was feeling unusually relaxed.  Off in the distance I could see Jerry Ziak and I knew he would be a good person to run with.  He was probably 60m ahead though and I wasn’t sure if I could close the gap.  I ended up catching up to him at around the 4K mark which was ideal since we had both been running mostly alone up until that point.  I mentioned to him that I was hoping to run under the course record which was just over 1:12:50 and he said we were definitely on pace for that.  Now I could just settle in and turn my mind off.

There were a couple of ups and downs as we snaked through Chinatown and Yaletown.  Sometimes I would find myself several metres behind Jerry but would ease back to his side when I recovered from the uphills.  This probably speaks more to my tired legs from a heavy week of training going into the race but I am glad I was able to close the gaps when they did form.  I wasn’t focussed on splits but thought only of staying with Jerry.  Having that as my sole task, and using other techniques to break up the tough spots, really kept me in the moment.

I took a gel at around 40 minutes in.  We were heading into Stanley Park soon and I knew that more hills awaited.  The hardest patch of the race for me occurred just after the 14K mark as we rounded the corner and proceeded to climb up Pipeline Rd.  Suddenly my legs would not lift and Jerry was immediately several paces ahead.  I tried to get going but could barely make it up the hill at a walking pace.  I was able to recover on the downhill but the damage had been done.  I know Jerry is a great closer in races so my hopes of catching up after that falter were almost non-existent. 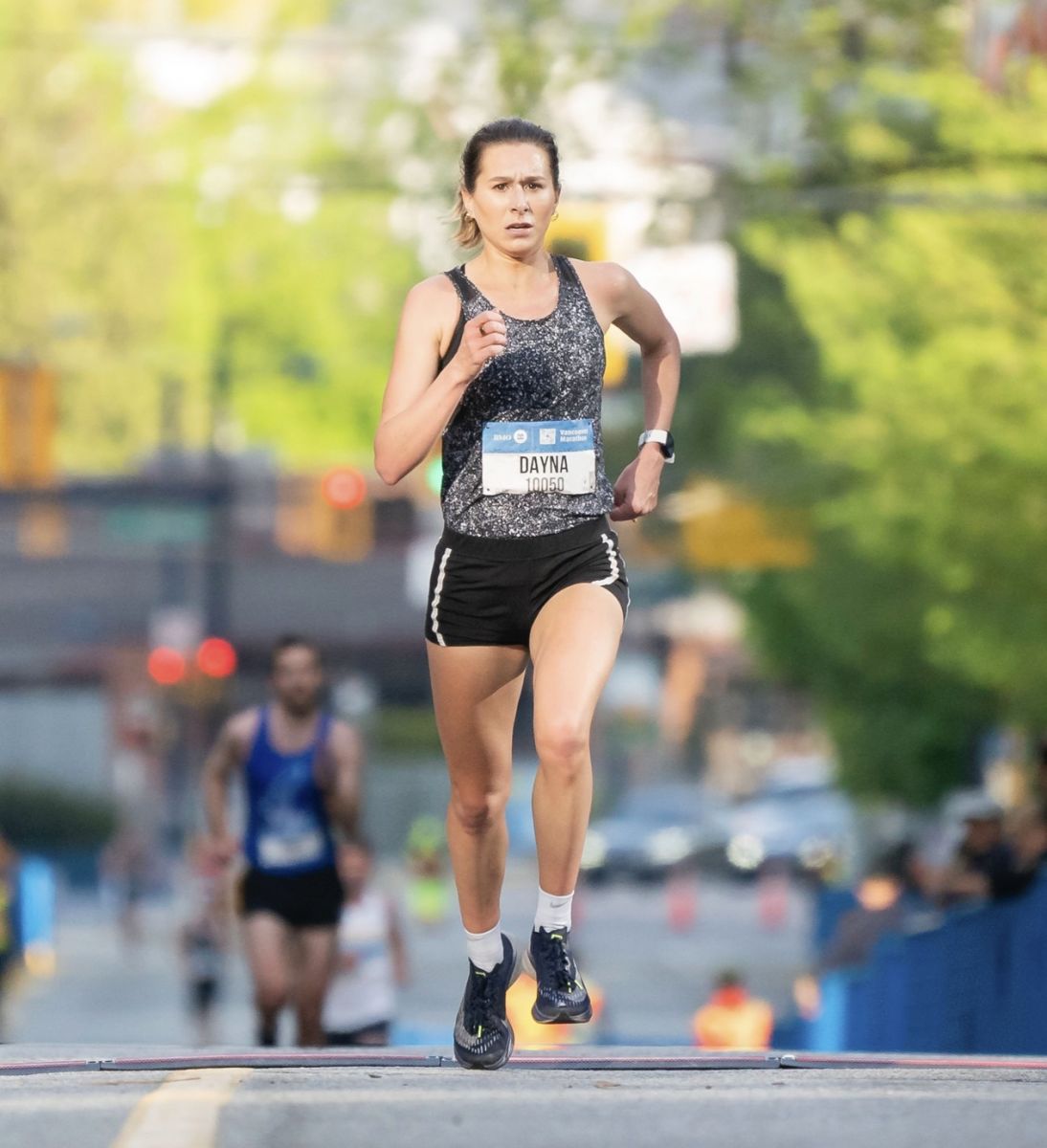 ^Climbing up W Pender towards the finish line.

I regained my rhythm and focussed on working hard on my own.  Keeping an eye on things ahead and working the ups and downs of Stanley park whilst thinking that I could still maybe get the record.  Just knowing that I might be close helped me stay focused because I would certainly regret throwing in the towel and then missing it by seconds.  That said, as I climbed up W Pender to the finish line I knew that I just couldn’t get there fast enough.  The clock ticked past 1:13 — I missed the record by 14s.  Jerry finished in 1:12:20 . . . oh what could have been!

^ Done. Need to work on actually smiling, although I blame the uphill finish.

All in all I’m pleased with that one.  I would probably be very disappointed had I been fresh and targeting a half marathon but in the context of the marathon build it was a great workout and it highlights the strength I have developed over the course of these past few months.  Mentally, I hope I can go into Ottawa with the same mindset that I had here.  I felt really relaxed, unstressed, and calm pre-race.  Perhaps, it was because I knew it was just about giving my best effort and my goals, otherwise, were quite loose.  Whatever the case, I have discovered through the years that when I run free and unhampered by forced outcomes, it’s easier to run my best.  Maybe that mindset is tough to execute on the goal race day but essentially I want to treat the Ottawa Marathon as a celebration of all of the hard work I have put in, and then see where that gets me! 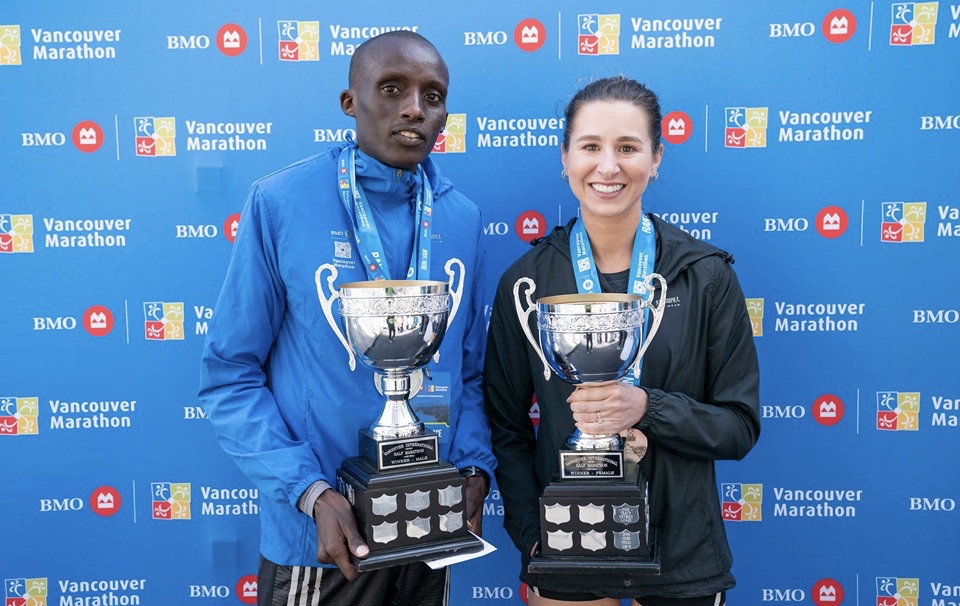