This past weekend I ran the Banque Scotia 21K de Montreal, my first Canada Running Series race of the year.  I flew in on Friday evening and it was great practice to try to get the body feeling good and adjust to the 3 hour time change with a short lead up to the Sunday morning race — an especially good simulation for Ottawa Marathon as I will have one extra day in that instance.  This past weekend my goal was to try to run fast, knowing that my legs might not allow for much, I was hoping for the best.  If I felt fresh I was prepared to push it and if not then I would aim to run faster than marathon pace.  Here’s how the race played out:

This section of the course was rerouted to include several kilometres on gravel, probably slowing things down a bit, but regardless I knew that it was going to be a tough day right off the bat.  My legs felt heavy, my stride felt long, and things just felt hard.  So, knowing that today was not going to be a pb day, I switched gears and focussed on just keeping a steady effort and securing the win.

Half of this section was a big headwind as we looped around the Olympic Basin.  I was on my own with no one to tuck in behind — this seems to be a recurring theme from my spring races — it was in this section where I began to settle into a steadier rhythm.

Not much had changed here.  I connected with another runner and it was nice to have company as we worked through the long stretches of wind together.  I felt secure in my position at this point, noticing that 2nd place was at least a minute behind at the halfway mark.

At this point of the race I was thinking about a recent workout I had done during a long run which included 2x6K intervals off 1K jog.  It was comforting to know that I had only 6K to go and certainly I knew I could do that!

The finish line came quickly and I was surprised to see my time.  Obviously I had taken my 5K splits along the way but I hadn't bothered to pay attention to my overall time or my ETA.  I had just assumed that because my legs felt so tired I was going to run much slower.  I was elated to come in much faster than marathon pace — despite not getting a pb (it was my 4th fastest half marathon time), it inidcates we're on the right track.  It was just not a day that everything clicked and that’s okay.  The stars can’t always align.

When I look back at the the week leading into the race it’s easy to see why my legs may not have felt super peppy.  Despite having a couple short easy days on Friday and Saturday, I had run my longest long run workout the following Sunday totalling 38K.  Following that, on Wednesday I had completed a workout of 6x2K on the roads.  With Ottawa looming in the distance it’s okay for a half to feel hard at this point — the goal is to feel fresh on May 28th.

Next up is the Times Colonist 10K in Victoria this Sunday.  I am expecting it to burn more than this past weekend but I am glad that it will be over quicker.  It will be nice to not have to travel far for this one and I am looking forward to trying to better my 10K personal best.  Catherine Watkins and I will be heading over together for this one so I know it will be a fun trip.  Stay tuned for that recap next week.  Thank you everyone for the positive feedback and congratulatory messages — this spring is certainly off to a great start and I really appreciate all the support! 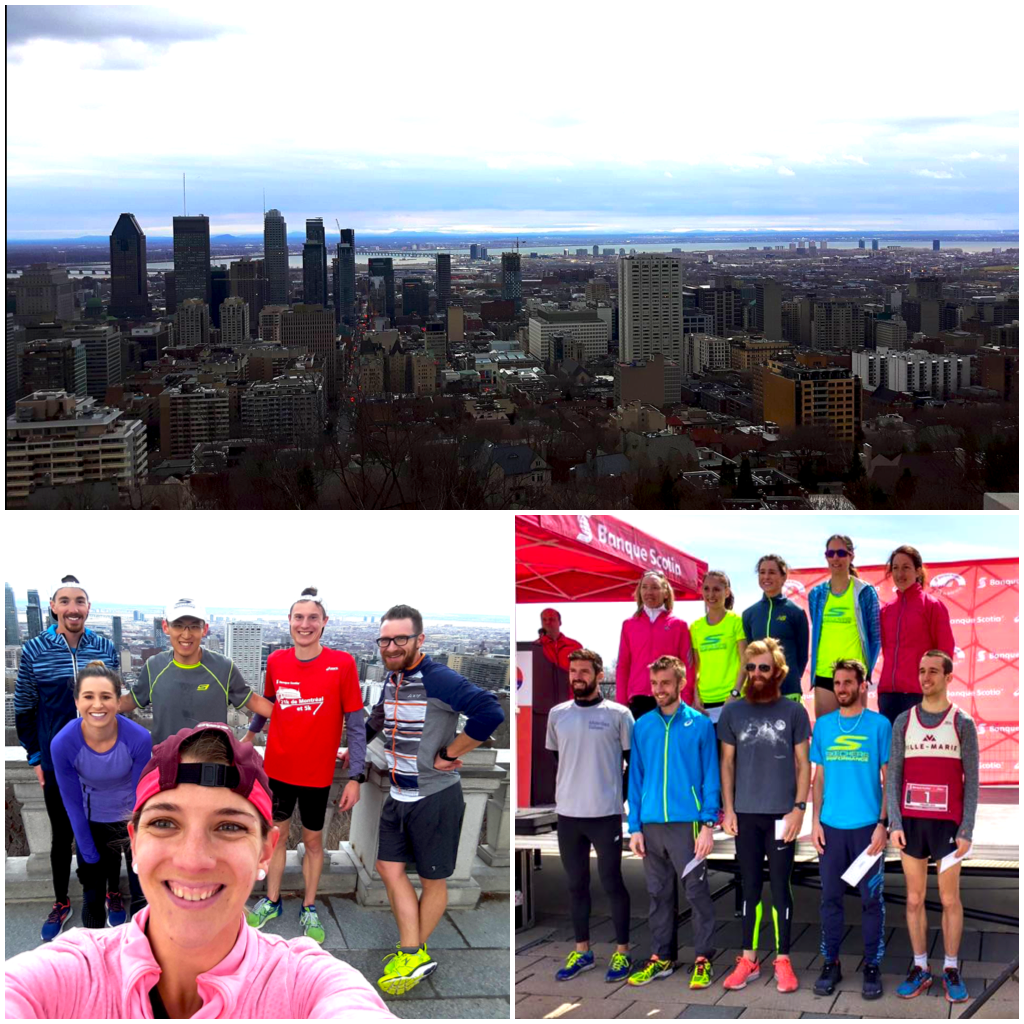 ^It was great to catch up with some Lancer Alums this weekend.  I was able to meet up with Josh and Tanis Bolton and other fellow running friends for a shakeout after my long flight.  We ran up Mont Royal and Tanis captured the pictures of the skyline and our group.  The following day I also connected with former Lancer Stephaney Hortian -- it was such a treat to see these faces again!