It has been almost seven weeks since the marathon.  I have finally gathered my thoughts and I will tell you about the good, the bad, and the ugly!

As discussed in my last post, prior to the race, I was feeling ready and workouts had gone splendidly.  I flew to Windsor eight days out from the race so I could adjust fully to the time change and relax at home.  I set my alarm to wake up at 5:30AM every morning to prepare myself for the early morning as well as I could.  As usual, the intense marathon taper really made me feel awful but I knew this was a normal reaction for me.  My short workouts during race week felt fine but the easy runs had me feeling sluggish.  Thankfully it is something I now recognize and I didn’t let it stress me out.  I knew that come race day I would feel ready to go!

So the taper legs were nothing to worry about but there was something that was causing me to wonder.  About two weeks before the marathon I was feeling a bit of tightness in my low back (sacral-iliac area) when, and only when, I was bending to pick things up around the house.  When I went in for my regular physiotherapy appointment he adjusted my SI and mentioned that I had just been "out".  Perfect! I booked a chiropractor appointment at my favourite place in Windsor for a post-flight adjustment to make sure the flight didn’t put me out of whack again and I felt very secure that my body was in the best form for this race.

A week out from the marathon, however, I was feeling a bit of pressure in the SI area while I was running.  Not pain, but just something that I noticed.  It was so slight that I was almost sure I would not even feel it during the race.  The feeling continued on almost every run but with the marathon only days out all I could do was express my fears to Josh and then put them out of my mind, stay positive, and trust that my body was ready to tackle the challenge.  I knew that my fitness was greater than it ever had been and was dialled in mentally — all I had to do was give it my all.

As expected, the race was wonderfully organized. The hotel, meals, expo, and bottle drop all went off without a hitch.  Krista and I had planned to run together since we had similar targets of 2:28-2:30 and we had our own pacer to help us along (mine was Dancan Kasia).  Weather was going be the challenge though, as it was calling for high winds and high humidity.  I was a little worried about my stomach in a high humidity situation  — that was definitely my greatest fear.  To control as much as I could I had brought my own dinner from home and went with my usual white rice and smoked salmon making sure to eat early to give myself enough time to digest before the morning.  I was in bed by 8:30 and even slept!

Race morning I had my usual oatmeal with banana, and coffee with coconut milk.  A quick check of the weather revealed a warm day, windy,  and a chance of rain.  Not ideal but we were all in the same boat.  A short warm up jog with the girls revealed that my legs felt good.  I felt peppy and light.  After some strides and drills I was primed and ready to go.

When the starting gun went off Krista and I found each other quickly.  I felt, however, like I was having to put on the breaks to run with her on the downhill so I just creeped slightly ahead with Dancan to keep things feeling loose.  Additionally, it had begun to rain and I remember thinking that I wished I had worn a cap!

The downhill continued and then levelled off.  I might have been a bit excited here and Dancan kept telling me that the pace was fine and to relax.  I think my inexperience may have shown through a bit and in hindsight I probably should have hung back a bit more due to the weather.  I did not adjust my goals based on the weather as this was on the fast side of goal-pace.  That being said I tend to really relax on downhills and just go with them.

The first flat section of the day with slight rolling.  Pace evened out.  My bottle was missing from the 15K drink table so I grabbed some gatorade instead.

Between 13 and 22K I remember having to tuck in behind Dancan due to the wind.  Nothing eventful really happening but lots of cheers for Dancan because he’s kinda a big deal!

The windy sections continued until we headed north on an out and back section. I split through half in 1:15:13 and mentioned to Dancan that my legs were feeling a bit heavy but that it was probably just a rough patch.  To me it was worrisome that I had been feeling the low back pressure from the start.  I was almost positive it would have been masked by adrenaline.  The pressure was turning into pain — and by 25K it was intense.  The pain also felt like it was inhibiting some muscles in my hips and legs . . .

The pace significantly dropped during this segment. The pain was extreme and magnified on every downhill section which was quite often as the rolling course continued.  I was passed by Krista and Rachel at around 29K as they moved into the 1-2 position.  I could not respond.

Dancan had dropped.  I was pacer-less and had no ideas how I was going to finish.  But I knew I had to get to the line.  I was motivated by the fact that I was still in 3rd and needed to finish at least 5th to solidify my CRS standings.  I stopped once for a short time from the pain.  I remember wishing there were potato chips at the aid stations.  I drank my whole bottle.

I wish I could say I had a short picnic during this brutal split but I was slowly making it home and stopped a couple times to get my bearings after some very painful downhill sections.  I kept grabbing my low back as if that would help . . . it did not.

Longest 2.2K of my life but I was so happy to finish and maintain my top 3 position.  I just wanted to stop running.  So much pain! 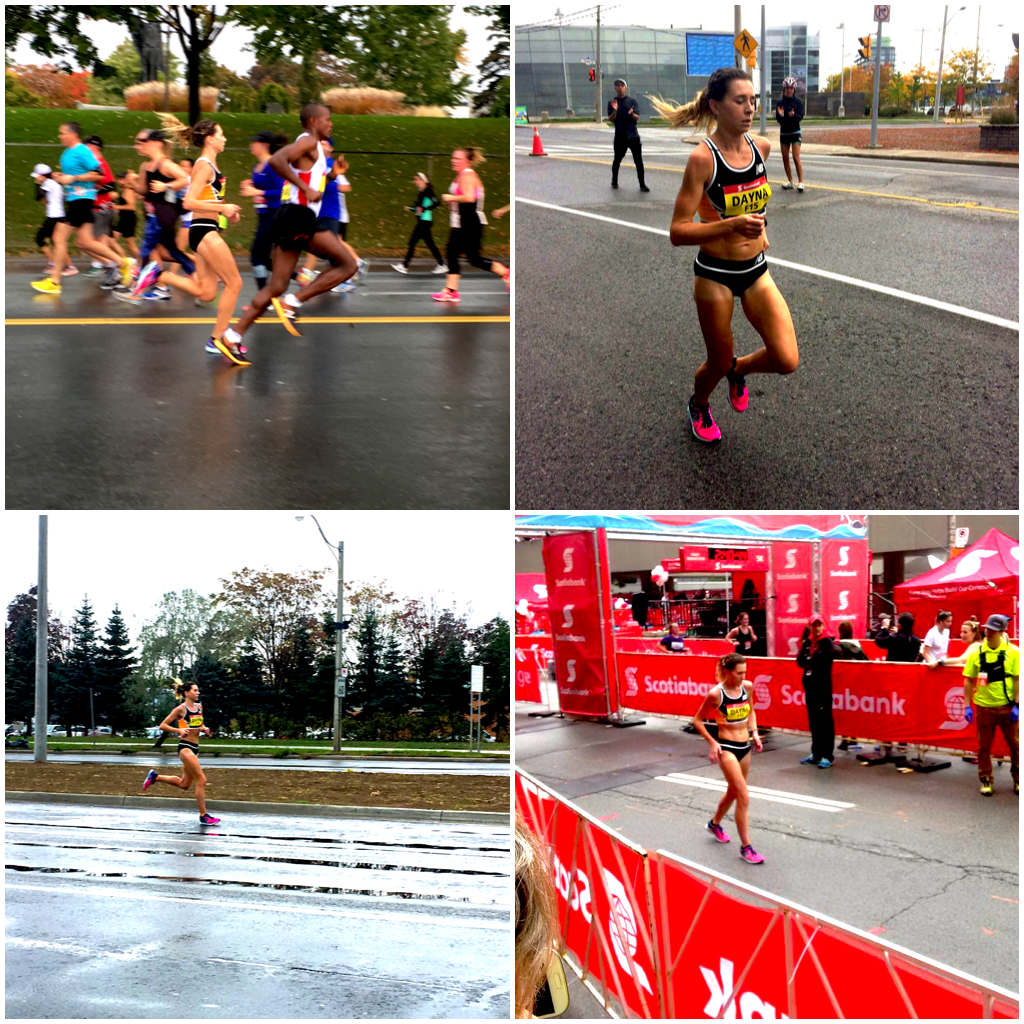 After the post-race interview I couldn’t take a step.  They wheeled me to the medical tent and tried to work things out but nothing was helping and I was wheeled to the elite area to find Josh.  Poor Josh had to carry me around for the rest of the day because any weight-bearing was unmanageable.

I iced and stayed in bed the whole evening.  The next morning I awoke and during my slow trek to the bathroom I fainted. Twice.  Josh was on his phone dialling 911 but I talked him out of it.  We needed to get home.  We flew out of Windsor Tuesday afternoon and I needed a wheelchair in the airports — so that was fun . . .

A week post-race I was starting to be able to move around without the aid of a chair to hang on to (like a walker).  Two weeks post-race I was walking at a more normal pace with only slight discomfort.  I stated back exercising at about 2.5 weeks on the bike trainer at home and have continued with just an hour a day.

It was a sacral stress fracture on the left side in my sacral ala.  That explains the pain I experienced during the race.  Although it is always frustrating to have to deal with an injury, I am thankful it is a bone.  Bones heal.  I am at 6.5 weeks now and not running yet but hopefully will be soon.

Lots went wrong in this marathon but a lot went right as well.  I was able to trust the taper, my nutrition was on point and I suffered no GI distress, and I finished.  I know this race did not accurately reflect my fitness but in marathons things rarely go perfectly.  I know I can build upon this effort and, although I definitely said “I never want to do that again” upon crossing the finish line, I am already eager to give it another go!

^ Erin Burrett snapped this pic of Josh carrying me to the hotel post-race.
^^ Heading home to Vancouver in style --  in my airport wheelchair.