To preface this post, when I had originally signed up for Houston back in the summer I was thinking of it as an opportunity to target a shiny new personal best and, of course, to motivate me through the winter months.  Then life happened.  I travelled to Mexico for two weeks in November/December, and then home for a week during Christmas.  My training was okay but it was not conducive to putting me in a position to go after that pb.  In Mexico the heat was challenging as always, so workouts were purely effort-based (fartleks).  Additionally, I struggled with fatigue from travelling and thus felt quite unmotivated when we were home for the holidays.  I ran each day but I did much less quality than we had initially planned — and I was fine with that — it’s Christmas, it’s a long season, and I wanted to enjoy a more relaxed offseason.  BUT that Houston half just continued to taunt me and I desperately wanted to wipe it from my schedule so I could feel less stressed.  Flights, however, are never easy to cancel so the alternative plan, as Josh so aptly put it, was to adjust my goals.  I don’t usually travel that far for a race unless I feel like I can take advantage of the opportunity and put forth a good performance, but here we were. 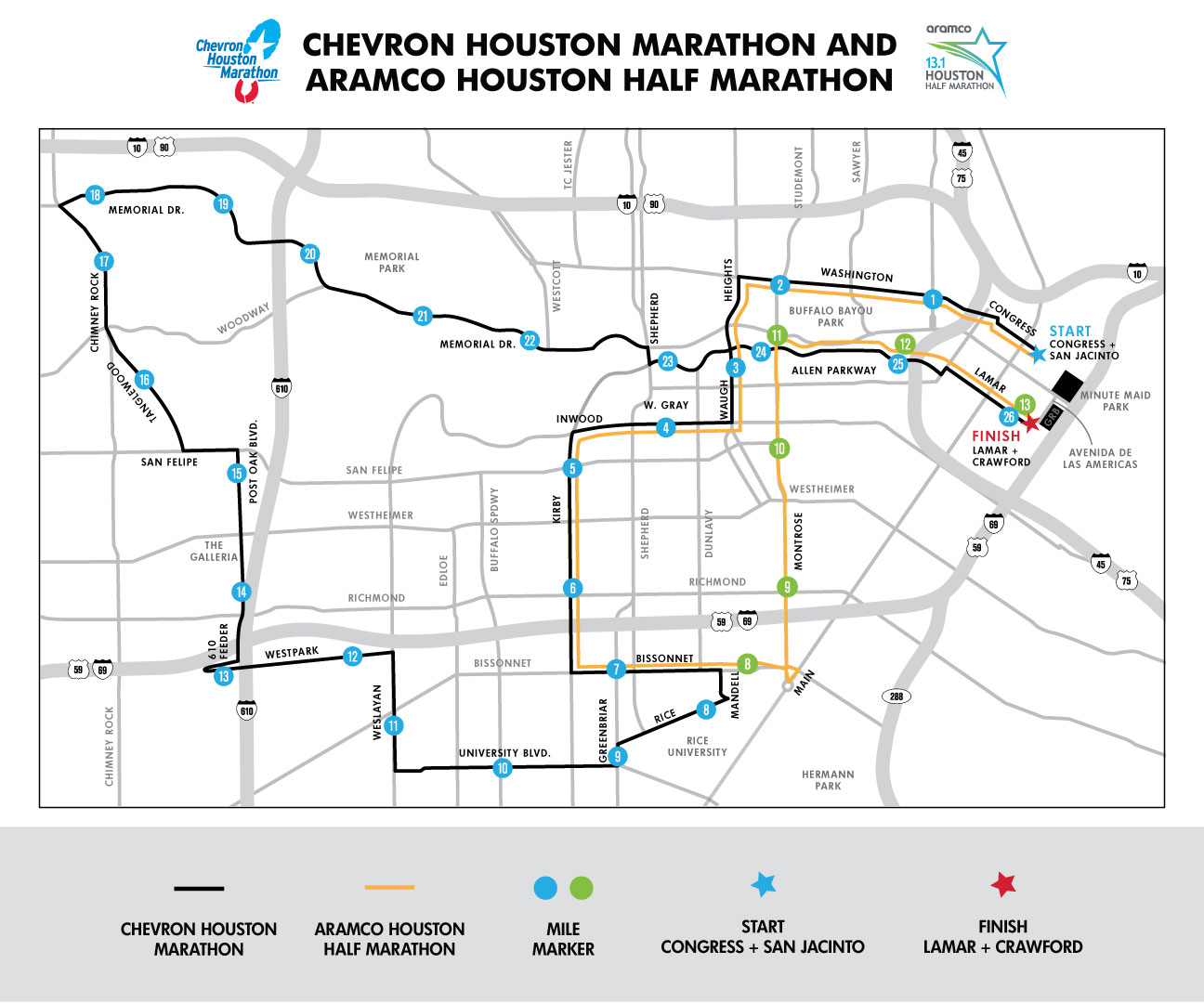 Goals were adjusted.  It wasn’t that I was no longer trying to run fast but instead of putting a time goal out there I solely thought of this race as a gauge of fitness.  Fast or slow we were so far ahead of the A-race spring goals that it didn’t matter.  So I decided I would just run hard.  Go out, run hard and try to settle in as best I could but to continue pressing the whole way.  If I faded at any point I knew that the training we would implement in the future would eventually fill in those gaps.  Workouts prior to this race were short (as we focussed on the speed side of things) so I was aware that I may be lacking in the strength-component needed for a longer race.  But whatever the case, any gaps in fitness would be remedied during the future training cycle.

So here’s a short synopsis of the race.  It was a chilly day in Houston.  We woke up to a windy, brisk morning with the “feels like” well below 0. 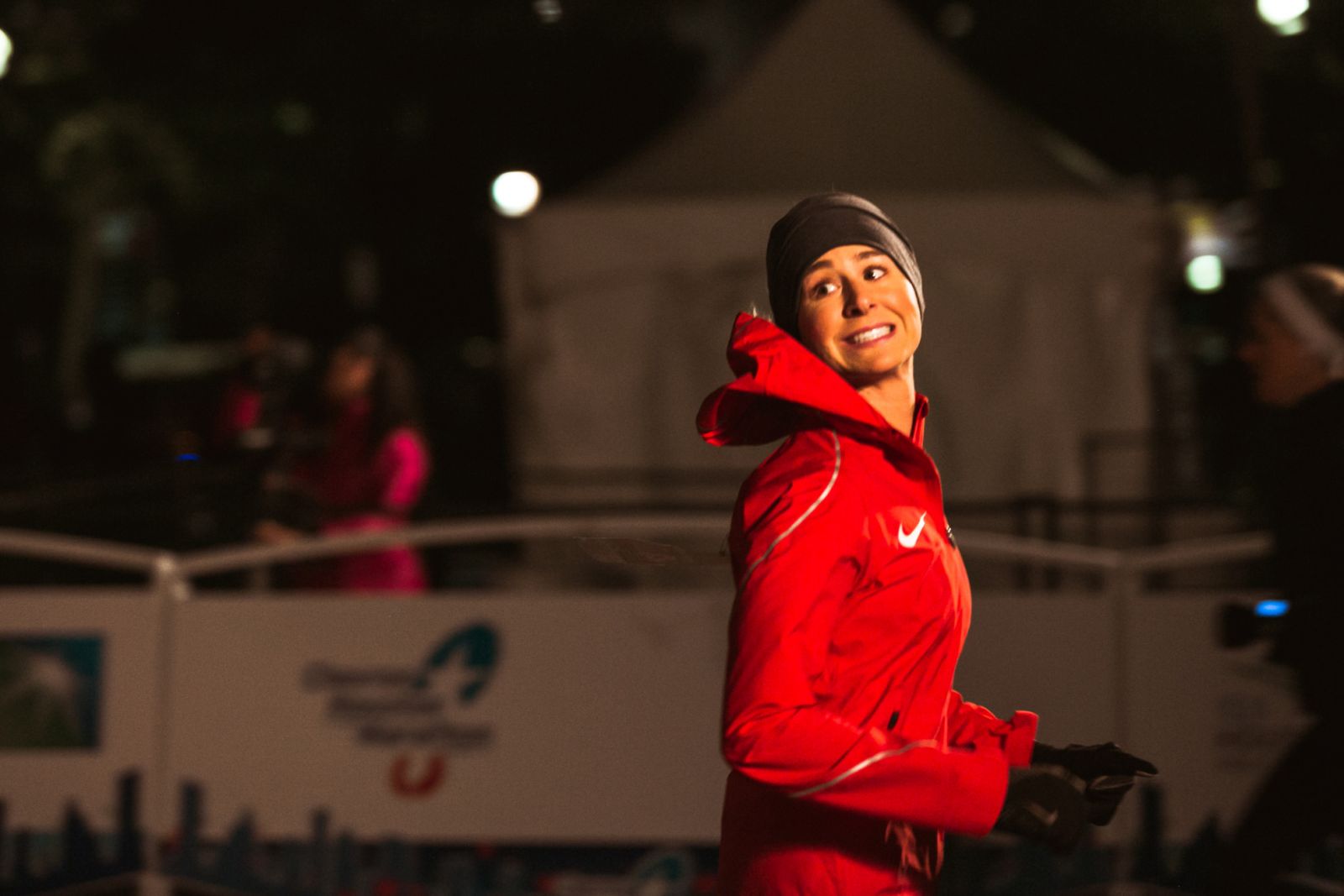 ^ My 5K warm up in all the warm clothing I could layer on.  Feeling calm and collected and able to run free with my loose goals in mind. (pc: Fredis Benitez)

We were quick out of the gates here and I think a part of me just wanted to get going so I could warm up.  The first mile involved a lot of downhill so it was a great opportunity to get the legs moving and feel out my surroundings.  Natasha was near me, as well as a couple other girls that I thought I could possibly key off of, depending on how I felt.  At around 2 miles I remember thinking, “how are we only at 2 miles . . . this is going to be a long race.”  Great thoughts to have. . .  By this point, Natasha had eased ahead and I had settled in beside a UK athlete. 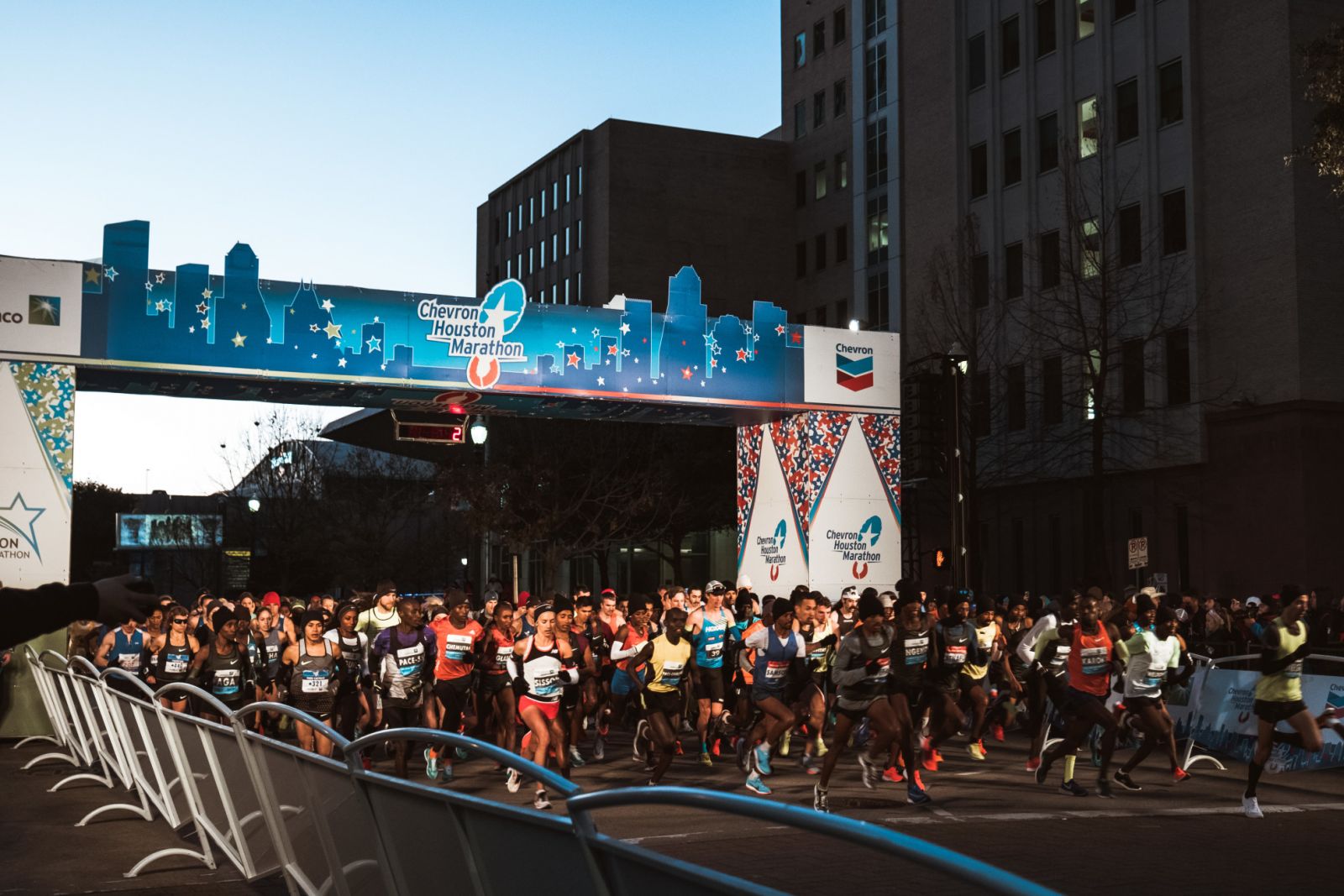 ^ One of the deepest fields I have ever been a part of! (pc: Fredis Benitez)

I continued to work hard beside the UK woman.  It was helpful to have company and get me into a rhythm.  I knew that I should try to stay with her as long as possible knowing that if I let her get away it would be much easier to become complacent, feel sorry for myself, and slow my pace.  I certainly had doubts come into my mind during this segment.  I was worried I was just going to jog it in because, well, it felt hard, and I wasn’t sure how much more I would be able to handle.

At 10K I felt like a switch went off in my mind and we were halfway done (even though we weren’t).  At this point I knew I could deal with the discomfort for the rest of the race.  It’s also the point in the race where I realized my stopwatch had not actually started.  Annoying, but probably for the best.  I knew I just had to run as hard as I could and my goals were independent of time.  I was still running with my UK friend and we continued that way for a couple more kilometres.  Then, just before the 14K mark, we rounded the corner onto Montrose and the icy wind slapped us in the face.  I found myself in front with no one to tuck in behind so I just worked hard and focussed on maintaining a solid effort, knowing all too well that my pace was likely plummeting.

The wheels had come off a long while back but I was confident I could get to the finish line in a respectable time and that’s what kept me going in this final segment.  That said, I felt my legs get heavier and heavier by the mile and the miles felt longer and longer.  Eventually, I could see the finish line after what felt like the longest straightaway of all time.  I saw the clock tick up from 1:12:XX and gave Josh a playful grimace as he yelled at me to keep pushing or I wouldn’t break 1:13.  As if I had any gear left in my legs . . . 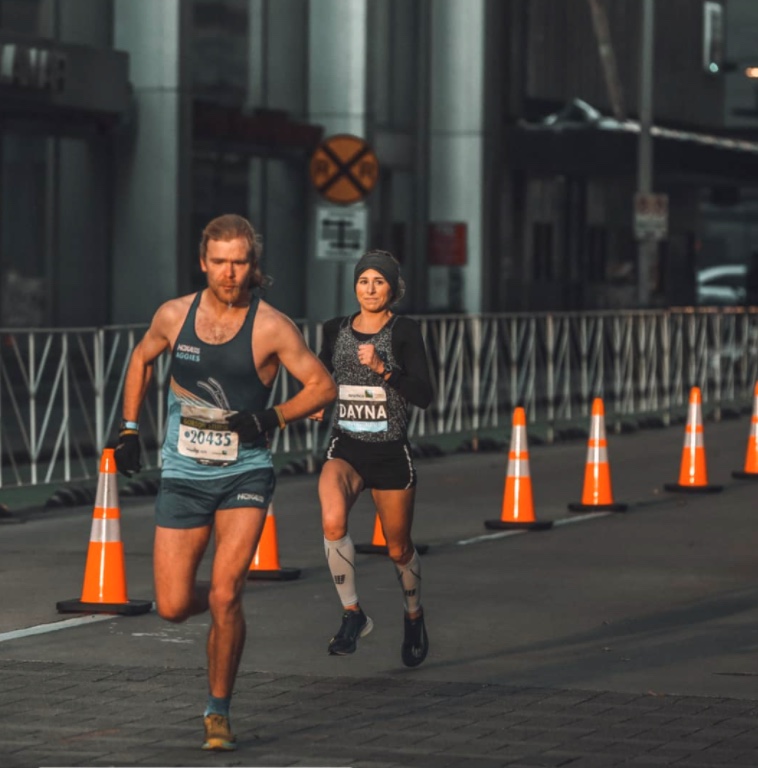 ^ Kicking it home or just barely making it there? (pc: Foon Fu)

So taking everything into perspective, it was a great race.  I’m excited about the fitness I displayed so prematurely in my marathon block (really, before we’ve even started a block) and I am eager to get back to training to fill in those gaps where I know I was lacking.  I have no doubt that more miles and longer workouts will be the biggest game-changer the next time I race.

So for now it is back to work.  You can check out my tentative spring schedule HERE.  I have two solid months until my next race  which means lots of time to put in the miles and harden the legs.  In the meantime though, you can check out my Instagram for more frequent updates to my training.  Thanks for reading!