The World Half Team was released yesterday.  First off, congratulations to Lanni Marchant, Laura Batterink, and Tarah Korir for making the team and earning that spot to race the World Half Marathon Championships in Cardiff, Wales later this month.  I am disappointed to not be a part of this team but my absence from the list certainly came as no surprise.  I just didn’t get the chance to race fast enough.

When they first released the qualifying standards for World Half I thought I already had a solid mark.  I had raced BMO Half Marathon in May of last year with a time of 1:13:14.  I quickly discovered however that this course was not eligible to be counted due to the start and finish being too far away from each other.  When I decided to run Houston Marathon I put World Half out of my head knowing I probably wouldn’t get the chance to race another fast half before the deadline.  Oh well.  Then my DNF in Houston created a chance for me to recover more quickly and go after the standard at First Half half marathon in Vancouver on February 14.  My training had been solid and I was excited to try to run a fast one even though the course is quite slow.  Additionally, the weather had other ideas . . .

The morning of First Half the wind was blowing, it was chilly, and it was steadily raining.  I went out at a decent clip but knew immediately at the 5k marker that today was not going to be the day.  I felt strong, despite the conditions, and just maintained a solid effort throughout the rest of the race to secure the win in 1:15:11.  At this point I had set up an a secondary race attempt to be able to try again so the goal was to not leave it all out there on the course.

My secondary option was Rock ’n’ Roll New Orleans half marathon two weeks later.  It was a flat course and would be in milder conditions.  After First Half I knew that I would be able to run fast enough there!  Unfortunately, the Monday night after the race I woke up with a fever, sore chest and a pounding headache.  I never get sick — it has been over a year since I have gotten so much as a cough or the sniffles never mind a fever and a virus that was potent enough to leave me bedridden for a day.  So the week after First Half was spent sleeping and barely being able to jog 5 min kilometres.  The following week, a week out from my 2nd attempt I was feeling like my energy levels were returning and my easy running pace was back to normal.  Unfortunately, I was still not able to easily run any intensity.  My Wednesday workout was dismal and I struggled to run marathon pace, never mind anything close to half marathon pace.  What to do . . .

We searched for alternative races that would give me more time to recover.  Nothing feasible came back.  We debated travelling to Ontario for Chilly Half but that in itself was a risk since the weather can be unpredictable that time of year.  I wondered if I should can the whole trip but knew I would regret not giving it one final attempt.  I have had lead ups to races in the past where I have felt absolutely dreadful but then race-day everything has come together.  So I had hope.

I arrived in New Orleans, Louisiana on Friday evening.  I had my usual terrible sleep but I think nothing of those anymore.  On Saturday I did my shakeout run on the hotel treadmill since the streets surrounding the hotel in the French Quarter were packed with people.  My legs felt a tad heavy but not terrible and my pick ups felt good.  Maybe this was all going to come together after all!!!

Race morning I arose at 4am.  Race start was at 7:30 and I wanted to get in some food and be up long enough to actually wake up since my body was still behind 2 hours in Vancouver.  My warm up was uneventful -- I didn’t feel particularly peppy but I didn't feel terrible.  When I entered the corral to do my strides the elite coordinator introduced me to Kevin Castille (a 43 year old 1:04 half marathoner).  He had raced the US marathon trials in early February and was offering to pace any women.  I told him that would be amazing and I was going for 1:13:00.  I finished up my strides feeling quite good and then awaited the start beside Neely Spence Gracey who also hoped to help me out if she could.  We went out almost right on pace, I knew however that it felt much harder than it should at this early stage.  The first 2 miles were on pace and that was about it.  My legs felt heavy and I had nothing.  I knew this might happen but I was hoping to not have to run an entire half marathon feeling like death.  Neely had pushed on ahead and I told Kevin that he could go and help her out if he wanted -- I was already in the hurt locker.  The rest of the race I just ran how I could at a steady pace.  Much slower than marathon pace but still enough to secure a 2nd place in the race.  I crossed the line in 1:18:41 and I honestly couldn’t even be mad.  Race day had brought me a perfect setup: mild temperatures, minimal wind, a personal pacer, and a pancake flat course.  My body, however, would have none of it.  BUT I had tried, made the trip and toed the line with a confidence that I could do it.  Some things are just out of our control.

Afterwards, Neely, Dylan (her husband), and my roommate Tina Muir ( a GBR athlete who had won the 10k — and was 2nd overall) all met up to explore the French Quarter and get some Louisiana cuisine.  We dined on po-boys with fried alligator, hushpuppies, and beignets — it was so enjoyable to be in their company and I am happy to have met more running friends!  They all flew out that evening so I wandered around a bit more by myself and was able to get my hands on a cafe latte from Cafe du Monde (and more beignets ;).  I certainly do not regret my trip to New Orleans and I hope to return one day and be able to take advantage of the very fast course.  Thank you Rock ’n’ Roll for having me! 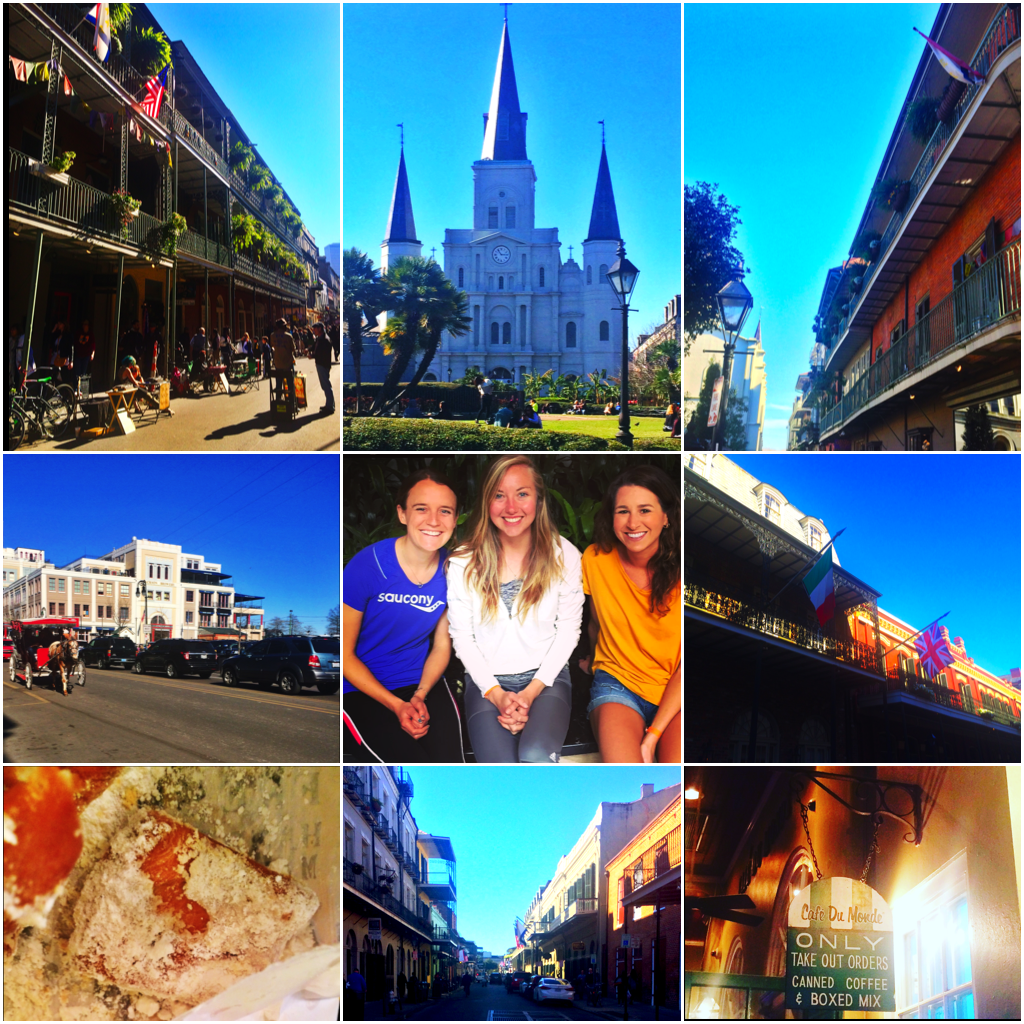 ^ Perfect blue skies as I toured around the French Quarter the day before the race.  I was wowed by the arcitecture, gorgeous wrought iron, and old-world charm.

^^ The middle photo pictures Tina Muir, Neely Spence Gracey and I in our hotel lobby before they headed home.  So grateful to have met these two wonderful women.

^^^ Beignets. I would fly back strickly for these pillows of goodness!

So next on the agenda are a few short races as I gear up for the Around the Bay 30K on April 3rd.  I will be racing the St. Patrick’s Day 5K this Saturday followed by the Modo Spring Run-Off Vancouver 8K eight days later.  More importantly though, I will be racing the Scotiabank Ottawa Marathon on May 29th.  My build towards this last shot at the Rio Olympics has just begun and I am eager to give the marathon another go.  Check out my race schedule here to see what else is on my spring campaign and stay tuned for my upcoming race reports!