To lace up only 3-weeks post-marathon was a bit of an unconventional approach, however I had had my sights set on this race for a while.  Mainly, I was interested to see how my body would handle the challenge of a quick turnaround.  It’s information and feedback I could use if I chose to race shortly after a marathon in the future — perhaps if I needed another shot at running a particular time standard.  Also, the Manitoba Marathon was the host for the Canadian Half Marathon Championships so it was another opportunity to try to podium at a Championship event.  With all this in mind, I felt very relaxed heading into the weekend’s race even though I was unsure how my body would handle the half marathon distance.

Race morning was pretty perfect conditions for Winnipeg in June.  The temperature stayed on the lower side (~14C at the start) and the wind was noticeable but not gusting.  I did find it to be humid but I think that spoke more to the 7am start time.

My legs were feeling a tad heavy during my 4K warmup but nothing that lacing up some flats couldn’t solve . . . or at least I hoped! 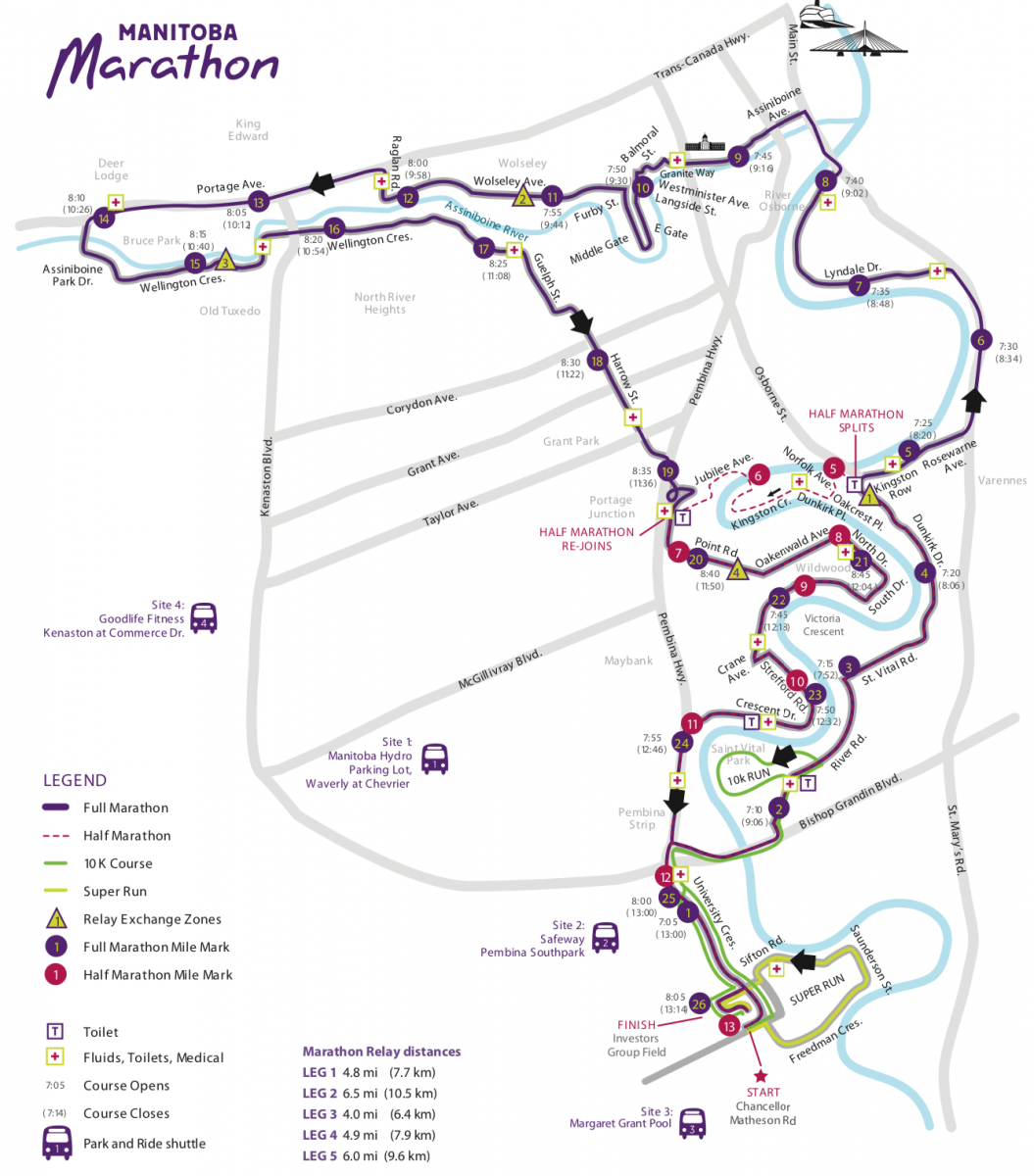 From the gun I tucked in behind some guys and Malindi Elmore was right there as well.  I knew she was fit.  She completely crushed me in the Vancouver Sun Run earlier in the year.  If she was on, I knew it would be delusional to think that I could challenge her.  Within the first few kilometres, as much as I wanted to keep pushing to hang on I knew that this pace was bit much for me — especially in a race where I was more focused on placing than on time.  It was not a race I could win.  So at around 3K I backed off, lost the pack, and settled into an easier pace where I aimed to target 3:30/k.  I knew I’d created enough separation from the other women that 3:30s would be enough to maintain my position.  I’m not going to lie but it sort of sucked.  I felt like this race was going to go on for forever since I was now in no mans land and still had so much farther to go.

I was doing well.  Clicking off 3:30s easily and focussing on one kilometre at a time. I kept thinking about my cadence, moving my arms quicker and hoping my legs would follow suit.  Nothing felt terrible but I didn’t have the usually pep in my step.

At just after 11K I took a gel.  I know it’s not necessary but I think I was hoping for a little burst of energy.  Instead I almost choked on it.  Well done.  Shortly after I felt my stomach start to turn and even began to keep an eye out for a port-a-potty.  I spotted a cluster of them but decided to wait it out.  Eventually the discomfort dissipated but I noticed my pace had slowed a bit during those kilometres of angst.  I tried to refocus and get back on track pace-wise.  Looking ahead, using the arms, increasing the cadence, one kilometre at a time.

At this point the course had been snaking along the river since just after the halfway mark.  It was quieter and often lined by trees and included a couple of slight inclines but it was generally flat.  I could see a fellow racer ahead and I kept my eye on him.  It seemed like we had been going the same pace for a very long time.  Eventually I could tell that I was starting to inch a little closer.  The course joined back up to highway at around 18K and shortly after I was able to make the pass.  It had been such a lonely race it was nice to have some human contact for a short time as we exchanged encouragments with one another.  The main uphill of the race was at 19K as we headed towards the stadium where we would finish.  It was a bit slower going since we had now merged with the 10K participants and there was some dodging and veering and it was certainly hard to run the shortest line.  Either way, we were closing in on the finish line.  I think I must have missed my chance to merge in as I entered the Stadium because I found myself finishing in the 10K shoot instead of the half marathon shoot -- again, probably not the shortest route.

Long route, short route it really doesn’t matter in the grand scheme.  For me this was about placing the best I could at the Canadian Championship. Times don't matter as much in a Championship race and certainly not when I knew I wouldn't be targetting my best so soon after the marathon.

All in all, I was pleased with how my body responded and how I maintained focus during what felt like a very long race due to the circumstances of being alone almost the whole time.  I feel confident in my recovery protocol post-marathon and there is not much I would change in terms of what we did the weeks following the marathon.  I think it’s a great reference point for the future.  Of course, if I did have to race so soon after a marathon I would probably look for something farther out than 3-weeks so that I could feel sharper. 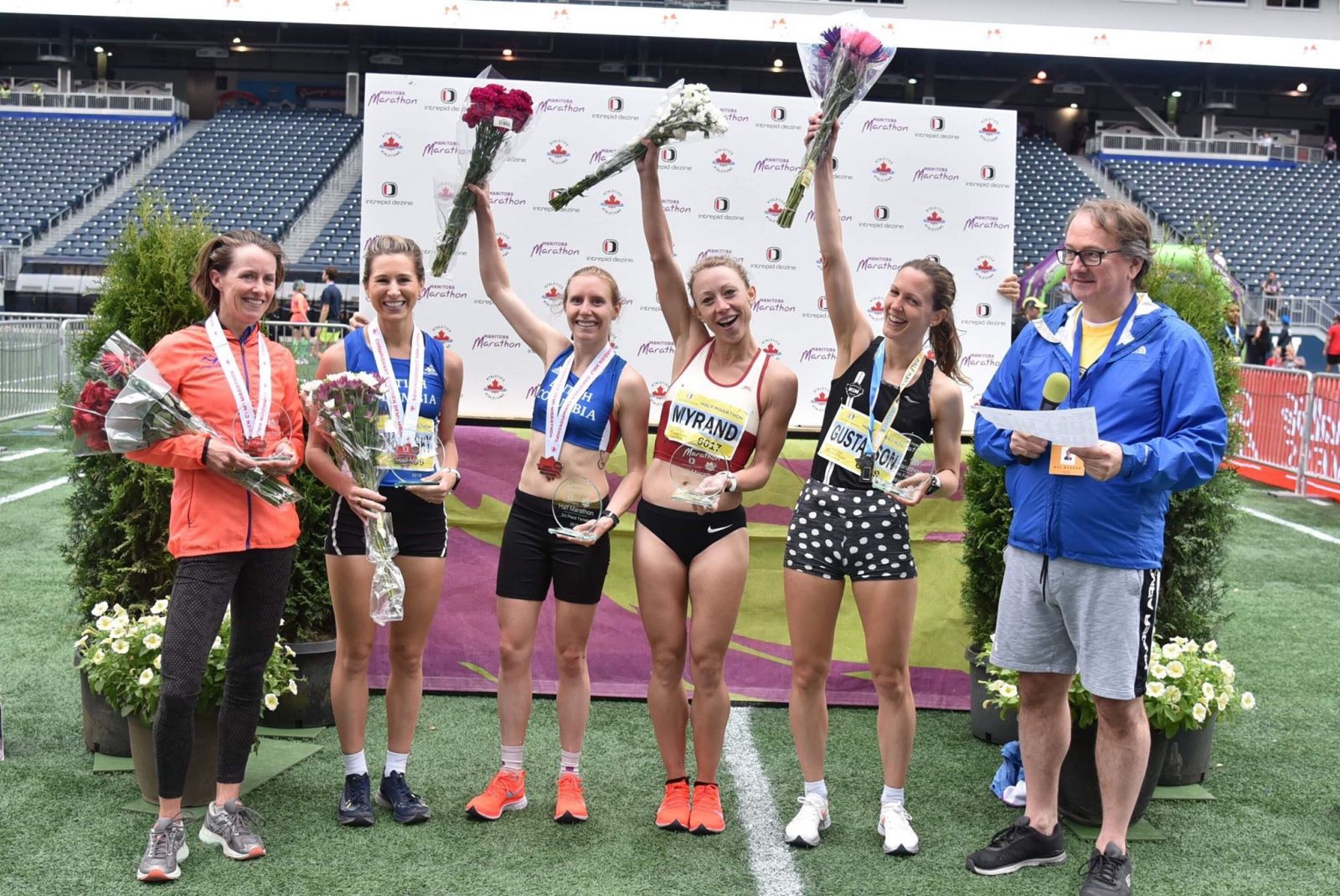 Next up is the Scotiabank Vancouver Half Marathon.  I added this one in at the last minute because it involves zero travel.  I promise this is the last one!  Next week I'll be recovering and preparing the body before the fall marathon build.  Until then, just humour me please;).