So my spring season has come to a close.  Perhaps it didn’t yield the results I know I am capable of but sometimes races don’t always come together on the day.  I still know that I am back to great form and have some fast times in me which I hope to display in the future.  After racing Calgary, which served at the Canadian Half Marathon Championships, I decided to take my break and forgo racing Scotiabank Vancouver Half Marathon.  But let’s rewind . . .

The week leading into Calgary I decided to use the Shaughnessy 8k as a workout.  It was told the course was quite hilly, turn-y, and challenging but I was gunning for the record nonetheless, and hoping to set a new 8k PB in the process.  Well, that did not happen!  It was a complete 1k uphill to start a two looped undulating course that somehow seemed to have more long uphills than downhills.  Immediately it felt impossible to be able to get back on pace but I tried to run hard and use it as a true workout.  The finish was a big downhill back to the start and I knew it would be close.  In the end I missed the record by 5 seconds and ran 27:33.  Still fun to get out there and push it!  To cap off the morning I was able to complete 4x1k on the nearby track and a substantial cool down. 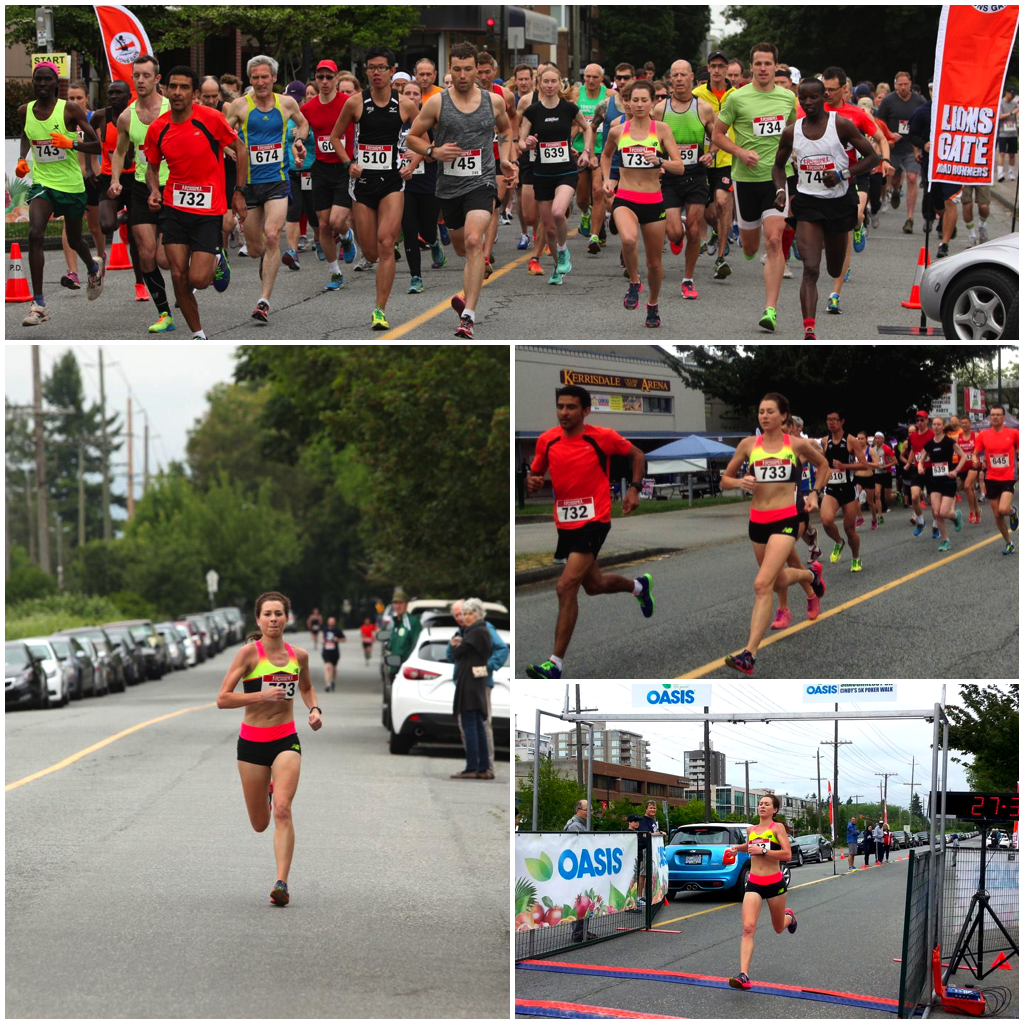 Calgary came on quickly after this.  We flew in on Friday and my legs felt dead on the shakeout after the flight.  Probably the taper-induced deadness — but it is never a great feeling to feel like death in the days leading up to an important race.  Saturday included another easy run and strides and left me feeling a bit more confident and ready to tackle Sunday.

It was a very very early morning.  With the start time of the race at an alarming 6:30 am I was up  at 3:30 trying to get in some coffee and feel alive before the start.  I felt nervous and anxious.  When the gun went off it was Lanni, Natasha, and I together together for the first couple kilometres.  The course had been described to me as flat — lies, all lies!  The undulations immediately made my legs feel heavy despite it feeling like a very easy pace.  I tried to just keep the effort easy and lost some contact with Lanni and Natasha going up a hill knowing that I could get back to them on the downslope.  There was no downslope.  Essentially, this was where I decided to stop pushing.  It was barely 5k into the race and my mind was telling me to just make sure I kept my position.  Thankfully I had a couple of guys near me to keep me focussed but it was not a very enjoyable 16-ish kilometres knowing I had just given up mentally.   I finished in 1:16:10, well over what I know I was capable of running.  Despite the disappointment of my race not coming together on the day it was still a great honour to be able to capture 3rd at the Canadian Half Marathon Championships.  I have previously collected two silvers (need to get that gold one day) and being able to medal is always an accomplishment. 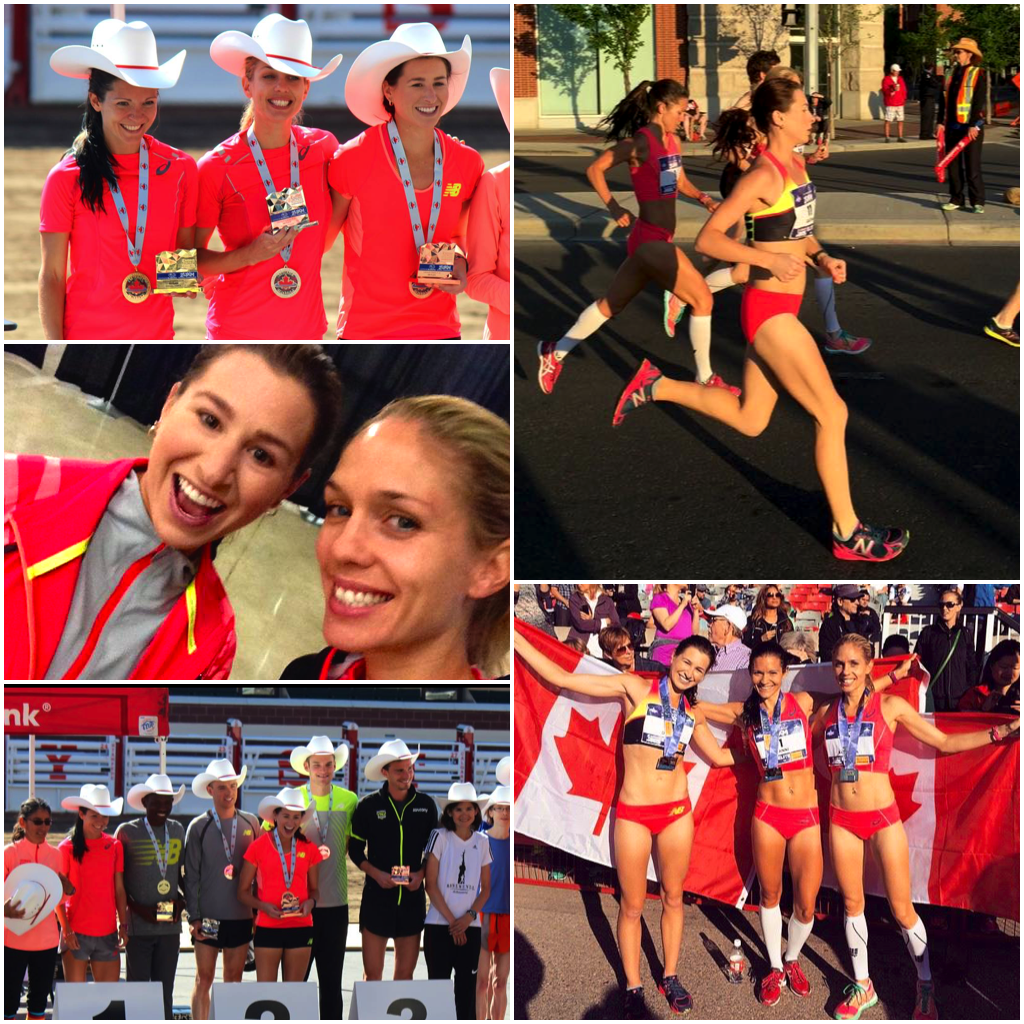 ^ Lanni, Tash and I at the awards ceremony (p.c.: Frank Stebner) + Me in the early kms of the race (p.c.: Deanna Larson)

^^ Naturally, a pre-race selfie was in order because everyone loves 6:30AM race starts . . . said no one ever!

With Calgary behind me I was looking forward to racing Scotiabank Vancouver Half Marathon as my last race and having the opportunity of posting a new personal best but in the days following Calgary I was experiencing some soreness in my shin which was likely brought on by the cambered route in Calgary.  Because of this, I decided to end the season as opposed to pushing through, racing, and creating a bigger problem.  Better to err on the safe side and not get greedy by trying to chase fast times!  Since then I’ve had some easy weeks and I am now slowly building back up so I can begin workouts in preparation for the fall.

So thus completes my first full spring season since 2011.  I raced NINE times over the course of four months (including three half marathons and one 30k.)  I set a new personal best in the 8k (at Modo Spring Run Off) and ran my fastest half since 2011 which was also my second faster half ever (at BMO Vancouver Half Marathon.)  Next time, I hope to bring to you some of my fall plans and update you on how training is progressing.  As of right now I feel like I took four weeks off when essentially it was about four days . . . I’m sure many of you can relate!  Until next time:)