This always seems to happen to me — I put the whole blog writing thing on the back burner when running becomes a bit tedious.  It’s not that I want to hide anything but sometimes it’s confusing when one day you feel good and then the next day not so much . . . it’s tough to find the words when your body doesn’t know what or how to feel.  So this is what has been going on.

I left you with a sub-par performance at the Rock ’n’ Roll New Orleans half marathon.  I got sick less than two weeks before the race and could not recover in time to not feel like death . . . so that was fun.  It was fine though, I got over it, and planned to lace up for some shorter races including the St. Patrick’s Day 5K and Modo Spring Run Off 8K.  Leading up to the 5K I could feel my right shin starting to flare up but it wasn’t anything that was hampering me.  I just noticed it.  Then warming up for the race I could feel a slight hitch in my stride.  It was just a 5k though, and despite going out way too hard, I ended up finishing 2nd in 16:40.  Not a terrible time for the time of year.

My shins have continually plagued me so it was ominous to feel that twinge again.  The week between the 5K and the 8K things got progressively worse.  I had already begun incorporating more cross-training to compensate for the reduced mileage leading into the St. Patrick’s Day 5K but now I was spending more time cross-training than running!  Furthermore, symptomatically it became more of a painful lower leg weakness — so easy running without a hitch in my stride was becoming impossible.  I sought out treatments that could be helpful called prolozone therapy and neural prolotherapy.  I figured that if these could decrease the inflammation then I could salvage the rest of my spring season.  Ottawa was the main goal but I needed to be able to run in order to put in the proper training for a marathon.

I had my first prolo session the Wednesday before Modo 8K.  It left me unable to even attempt running for 2 days.  Modo was going to be tough.  Somehow though, the race went okay.  I went out fast and had a good group for the first 2k but my quads quickly started to burn.  All of my time on the bike trainer the past week was coming back to haunt me.  Thankfully I was able to cruise the rest of race and maintain my 2nd place position. The shin didn’t feel worse but it didn’t feel better either.

I continued with the prolo treatments.  Running was possible when it felt okay (it flip flopped day to day) but most of my hours were spent on the bike or cybex arc trainer (my favourite elliptical cross-training machine).  I aimed to get in at least 3 hours every day to try to maintain whatever fitness I could.  It sounds extreme, perhaps, but I knew that if I wanted to race Ottawa Marathon I would have to do a lot of work if I wasn’t running.

In the meantime, I flew to Ontario where I had committed to doing a couple of races — Around the Bay 30K and the Race Roster Spring Run-Off 8K.  It was helpful to be home and not working and I was able to get in a lot of training throughout the day.  In the end though, I decided to forgo racing Around the Bay 30K — it was a tough decision but that course can really beat you up and I was already in a mangled state.  Instead I focussed on doing the 8K in Toronto — I knew my body couldn’t handle doing both.

The Wednesday before the race I did a short 4x1200m workout with 400m recovery jog in between.  I needed to make sure I could actually run fast since I hadn’t done any intense running since Modo 8K (2.5 weeks ago).  Thankfully that went well and I was able to run one of the fastest 1200m workouts of my life.  I guess all of the cross-training was working and mentally I was ready to race. It went well!  My body felt strong and my stride felt, not like someone who had only been running one or two times a week.  Instead I felt amazing.  At about 4K my left quad was beginning to fatigue but I fought hard during the second half and I was able to finish in 2nd behind my NB teammate Rachel Hannah on an extremely cold and windy day in High Park.  Mission accomplished.

Now I could just focus on Ottawa.  My shin was slowly feeling better but unfortunately it was not soon enough.  Despite my efforts and treatments Josh knew that I had run out of time to be able to get in the necessary work to give an honest effort at Olympic standard in Ottawa.  He made the call — there would be no marathon.  To say I was disappointed was an understatement.  I fought him hard for only a few minutes before succumbing to the ultimate realization that he was right.  I had no time! Ottawa was only a little over 6 weeks away and no amount of cross-training could save me now.  It was time to get the shin back to 100% and look towards the fall.

With that decision made, naturally I wanted to give this whole “racing-on-no-running” thing another shot!  With only two days to go I decided to race the Vancouver Sun Run 10K.  My left quad was still pretty sore from the 8K but I knew I could tough it out for a 10K race.  My goal was just to be in the top 3 for Canadians.  It was a grind from about 3k to the finish — my left quad was spasming and I thought I was going to have to crawl up the hills.  I managed to finish 6th overall and 3rd Canadian but I have never fought so hard in a race.  If anything it was a great lesson in mental toughness!

So what’s next?  I am just easing back into training and workouts.  I took a full week of cross-training after Sun Run and really played it by ear coming back into the running and workouts.  I am still on the bike most days of the week to get even more out of myself and boost the “mileage”.  My shin is about 90-95% and I’m aiming to keep it in this happy place.  I have also incorporated orthotics back into my daily mileage routine.  Hopefully, this will keep the body happy since it has worked for me well in the past.

This spring has been tough.  I had big goals and I was not able to check many of them off.  Hopefully I can give that marathon thing another go in the fall — it’s beckoning me.  Until then I will continue to put in the work.  It will all pay off one day! 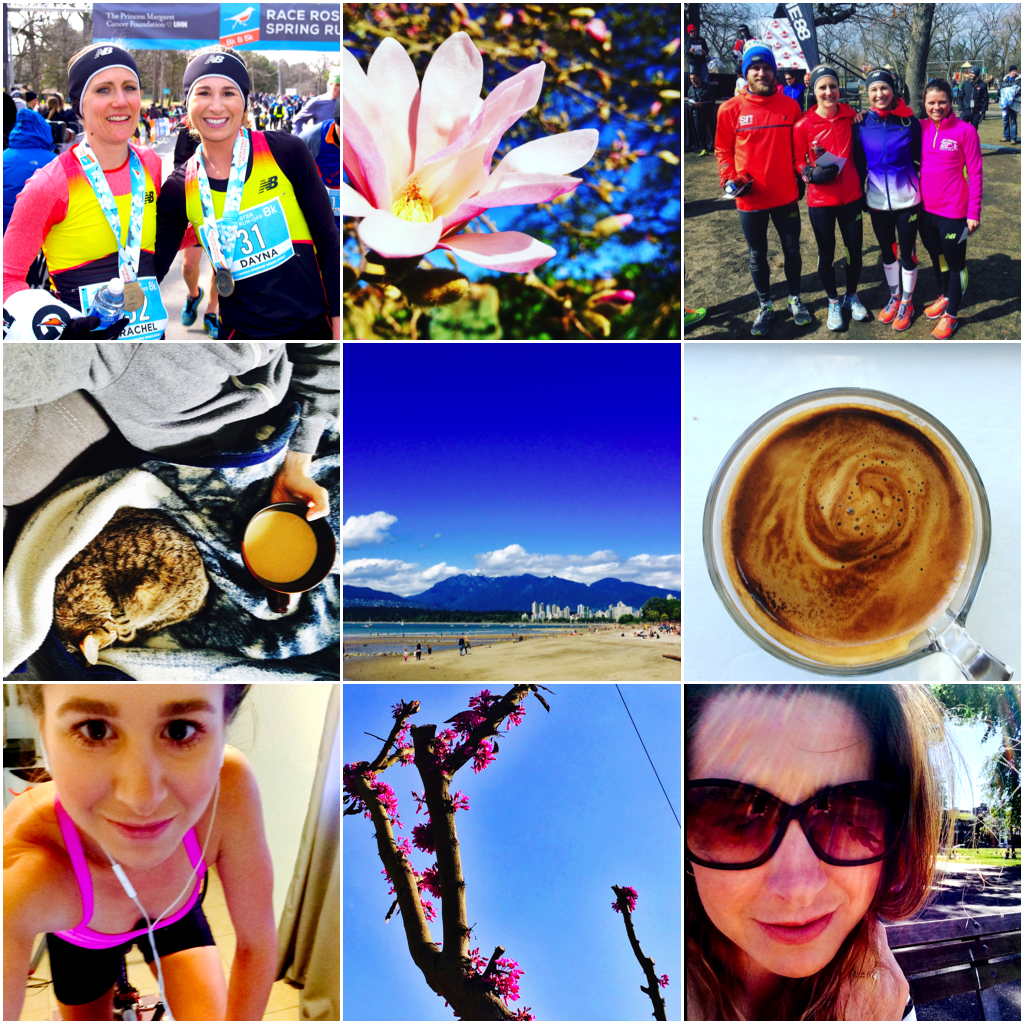 ^ Rachel Hannah and I at the finish line of the Race Roster 8K in Toronto (p.c.: snapd). Meanwhile it was springtime in Vancouver.  #TeamNB all bundled during the awards ceremony in High Park (p.c.: Dave Korell).
^^ Coffee, magnificent scenery, and more coffee.
^^^ Lots of time inside on the bike to maintain fitness. Since I was always inside I'd go for walks around the neighbourhood so I could enjoy the gorgeous spring weather:)