One week to go until I toe the line at Scotiabank Toronto Waterfront Marathon.  I am excited, anxious, nervous, petrified, and calm all at the same time!  In short, this marathon build-up has been flawless.  That’s a tough thing to say because in all honesty no one cares if you had the best or worst build up of your life — it’s all about how you perform on the day, but it does give me confidence to know that I have what it takes and I’ve put in the quality work.

I opened up my fall on September 11th with a little 5K rust-buster at the Canadian 5K Road Championship in Toronto.  Coming home with a 4th place in 16:27 was disappointing but it was important to remember that the marathon has been the one and only goal this fall, thus far.  During the race I was in the mix of it and led through the first 3K but quickly lost momentum when I was tripped up during the uphill second half.  I faded to 5th, managing to fight back and snag 4th place.  I was proud of that fight.  In the end it was good to leave Toronto with a little speed workout in the legs and a fall race under my belt.  Those first races are the season are tough!

Six days later I was back on the start line and vying for some personal redemption.  The personal best I had hoped for in Toronto didn’t occur but I was giving it another shot — this time in the 10K.  Naturally, the floodgates were opened on this dreary morning, in perfect west coast style, for the Vancouver Eastside 10K.  Not ideal conditions to try to run fast but I’d like to think I am use to running in the rain since moving here.  From the start I found myself working with Natasha Wodak as we clipped along with a nice pack of master’s men.  Certainly helpful to be able to run with a group in the windy and rainy conditions.  I felt strong and composed despite slipping and sliding on the Gastown cobbles.  As we neared the final 2K we both thought it was just the two of us duelling it out — not so.  Leslie Sexton blazed by and immediately gapped us.  I hesitated momentarily, something I very much regret, and found myself a ways behind both Leslie and Natasha.  I tried to make up ground in the final uphill kilometre of the viaduct but only managed to secure second.  Leslie was just too far ahead and too strong in the final stretch.  I’m excited for our rematch at STWM;)  33:35 was my final time which was good enough for a 10s pb.  Always nice to be able to run fast when your training has been targeting quadruple the distance!

Fast-forward through the last 3 weeks of many big-girl workouts (debating on whether to share some of these? Anyone care?) and you get to today.  I’m home in Tecumseh after flying in from Vancouver yesterday.  I’ve given myself lots of time to adjust to this time-zone and I’ll be driving up to Toronto on Thursday (after Josh’s flight lands in the morning).

This marathon is a re-do debut.  I only got to 25K at Houston earlier this year after multiple bathroom breaks and an unhappy tummy.  Because of this the marathon distance is still, to me, uncharted territory.  I am excited to finally nail one down and, essentially, continue to learn more about this distance.  No matter what happens I know that I am the strongest and healthiest I have ever been and that is thanks to this village: Kimen Petersen, Jim Bowie, and Aaron Case.  Golly, this is starting to sound like an Oscar acceptance speech, and I know that I haven’t even raced yet, but I would not even be at the start line without these guys! And finally, thanks Josh — you’re the best.  You put up with my whining, self-doubt, and motivate me to be the best version of myself every day.

For those interested in watching on Sunday, the race begins at 8:45EST and will be streamed live from HERE.

Stay tuned for my race recap and war stories in my next post! 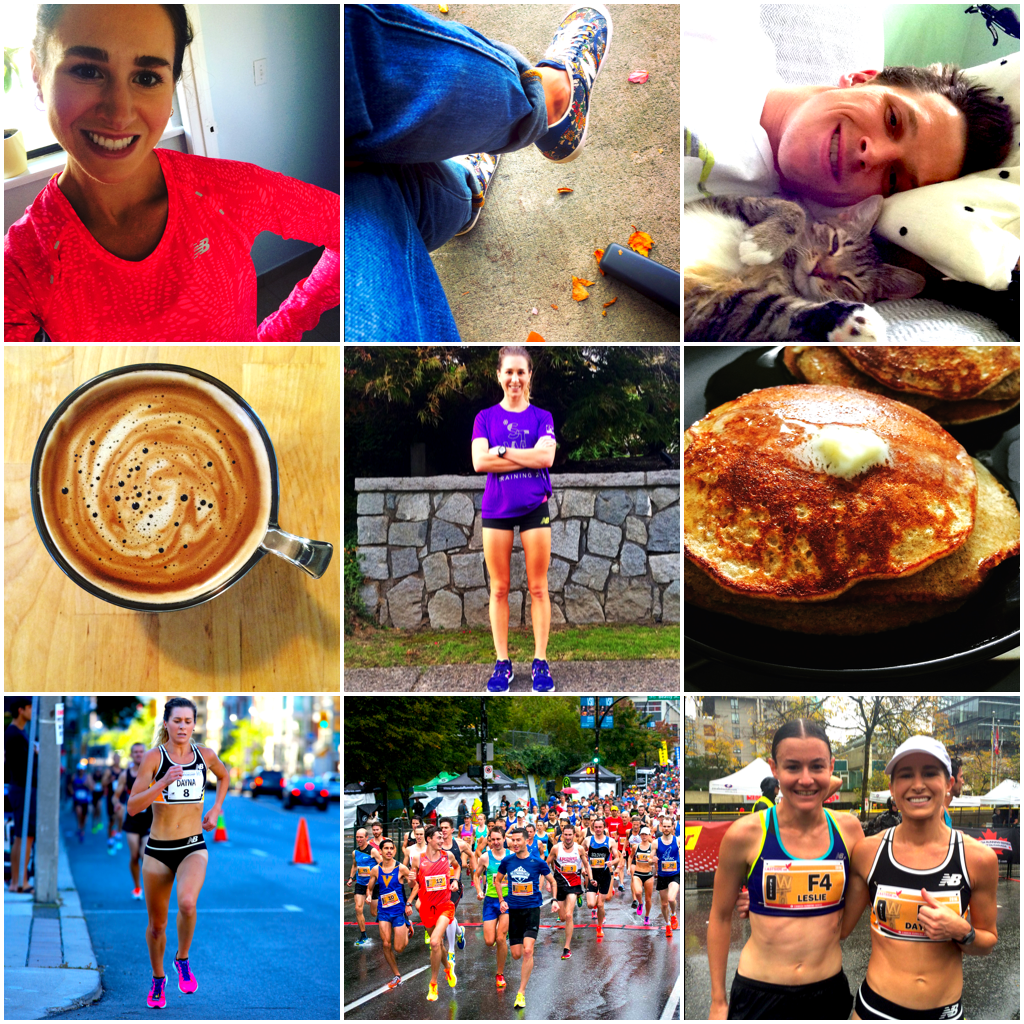 ^^ Marathon training means lots of coffee and lots of pancakes;)

^^^ Racing the CDN 5K Champs in Yorkville. The start of a rainy Eastside 10K.  Leslie and I smiling big and ready for STWM.