After a rocky spring in which I felt like I was running with half my body, on very little actual running, it was nice to finally get it together and feel strong again for one more race of the season.  I was looking forward to getting in a fast 10K at the Toronto Waterfront 10K, a new race (replacing the CRS Toronto Yonge Street 10K) that runs primarily along Lakeshore Boulevard.  My workouts leading into this race were exciting.  I was running some of the best workouts of my life and feeling strong in the process.  Things seemed to be indicating I could easily run a new personal best (sub 33:44) and I was ready to end the season on a good note.

Well, I think in cooler temperatures that may have happened.  I’m really not looking for excuses but coming from a chilly Vancouver, Toronto was hot!  It was a warm muggy morning and when the gun fired I went out aggressively, clocking 16:36 through 5K.  Krista DuChene was closer than I expected but I felt controlled at that point.  As we headed down Lakeshore we experienced a downhill then a hairpin turn at around 7K and back into the uphill.  That’s where the goosebumps started and I realized I might be in a bit of trouble.  The heat was really getting to me and my legs felt like lead as we headed up the hill.  I could feel Krista start to make the pass and there was little I could do to prevent it from happening.  I tried to hold on but at this point I was just hoping I didn’t have to walk it in.  Those last couple kilometres were a struggle.  Krista finished a solid 10 seconds ahead of me and took the win.  She said she needed to get one after I took the win at First Half — fair enough Krista, fair enough;)

So reflecting on that race I am not sure what I could have done differently.  In the week leading into the race Vancouver was cold and rainy and I had even worn gloves twice on my runs.  I definitely was not acclimatized. In the future I should perhaps expect it to be a factor and make use of the water cups to help cool me in the earlier stages of the race to try to slow that heat exhaustion down and stay cool for as long as possible.  Had I done that, it may have gotten me to the finish without the goosebumps occurring.  All good things to remember for next time so I am better equipped!

So what’s happening now?  Well, after the race I took two days off of running and then just logged easy mileage for a few weeks.  My parents came in from Windsor for a week and we had a little eat-cation here and I enjoyed doing some non-running activities.  We toured around the city, visited Granville Market,  went up to Grouse Mountain, walked around Stanley Park on Canada Day,  ate the ooey gooey cinnamon rolls from Grounds for Coffee on the pier at Jericho Beach, and had some wonderful dinners out.  It was a great mental break from running and I think it was much needed to set myself up for a successful fall.

It feels good to be back into workouts now and slowing increasing the mileage to gear up for the rest of the year.  I am targeting a fall marathon (announcement to come later in the summer) and a couple of races leading into it.  Next up will be the Canadian 5K Road Championship in Toronto and then the Vancouver Eastside 10K.  Not many races on the schedule but I think when you are building into a marathon it's not a bad thing to have less on the race schedule.  For now it’s all about getting back to work, staying healthy, and keeping my eyes on the prize! 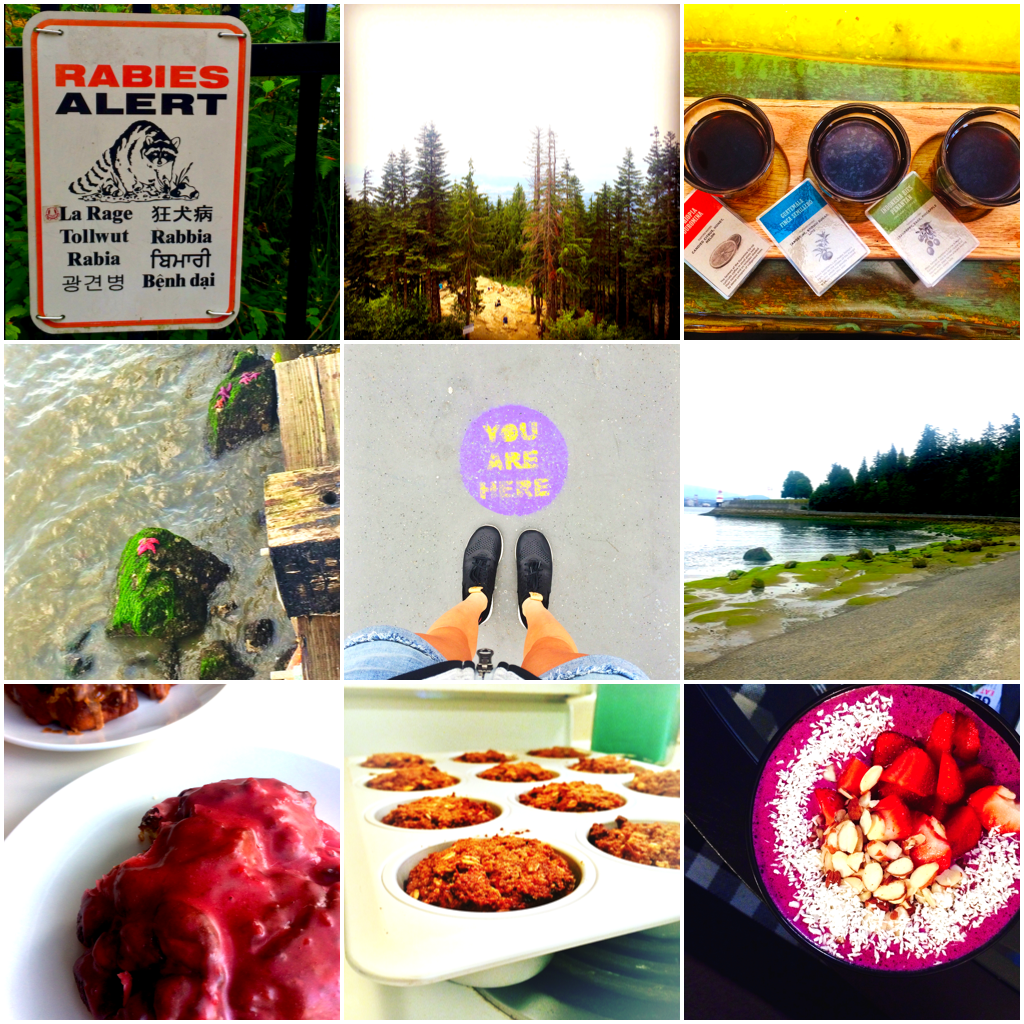 ^ This sign in Stanley Park just reinforces my deathly fear of racoons after a traumatizing childhood experience.  Then there's the Grouse Grind -- a different kind of trauma in which my legs don't work for days afterwards.  Coffee flight??? Yes please!!! . . . but I cannot get on board with it sans cream.

^^^ My cherry bourbon apple fritter from the new Cartem Donuterie in Kits! Yummy muffin recipe that is my new go-to. Refreshing smoothie bowls are pefect for that post-run summer meal.